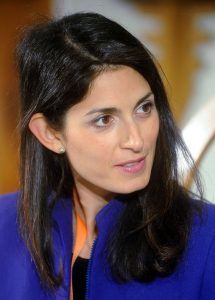 Rome has elected lawyer Virginia Raggi as Mayor — the first time a woman has held this position in the city’s history of 2800 years.

At 37 years old, Raggi, who won by 67 percent of the vote, is also the youngest mayor in Rome’s history. “At a time when equal opportunities are still a myth, this victory is of extraordinary value,” she told the media.

Raggi earlier served as councillor for three years in Rome. She is a member of the Five Star Movement, an anti-corruption party. It was started by Beppe Grillo, a comedian, blogger and unconventional entrant into Rome’s politics. Its popularity has been fuelled by the regime of corruption that Silvio Berlusconi, the former Prime Minister of Italy, was known for running.

Another female candidate from the Five Star Movement, Chiara Appendino, won with 55 percent of the vote in Turin. The election of two female candidates for the post of mayor is such a novelty in Italy that it has sparked a debate about what the feminine form of sindaco, the Italian word for mayor, is.

The previous leader of Rome resigned following a corruption scandal, leaving the city leaderless for eight months. It is into this situation that Raggi will enter when she takes office. One of Raggi’s key promises in her campaign was that she will focus on fighting corruption.