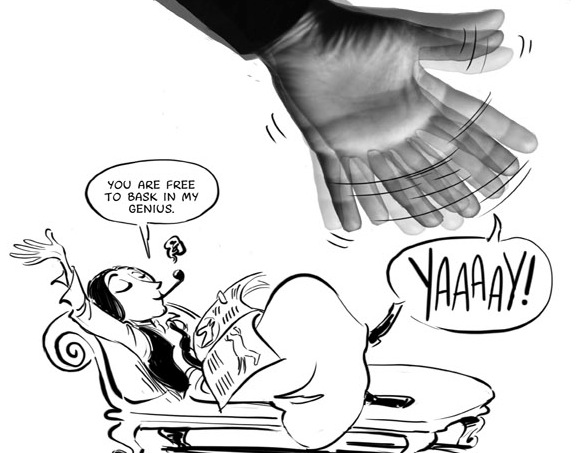 Sidney Padua’s graphic novel, The Thrilling Adventures of Lovelace and Babbage: The (Mostly) True Story of the First Computer, set in an alternative steampunky universe, published conveniently in time to coincide with the Internet’s own girl Ada Lovelace’s 200th birth anniversary, seems to tick all the faddish boxes. However, this is a book that will reward re-reading and always find an audience, such is the breadth and detail of her research that manages to never take its characters too seriously. 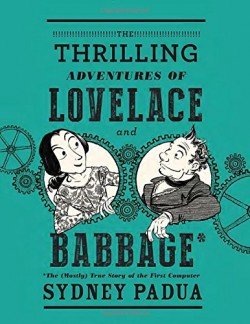 For a lapsed Byronist who currently works on digital culture and loves comic books, it’s hard not to imagine that Sydney Padua was kind enough to write her book for a very niche audience: namely, me. My solipsism notwithstanding, I promise you, dear reader, that you’re unlikely to encounter anything close to Padua’s tour de force, inspired in turns by whimsy, pastiche and the most entertainingly erudite duo you’re likely to encounter this side of the 19th century.

Ada Lovelace is a feminist heroine for our times – so embodying the zeitgeist that if she had not existed, we’d have to invent her. Her estranged father was the notorious poet Lord Byron – famously dubbed mad, bad and dangerous to know by one of his many lovers – her mother the prim noblewoman Annabella Milbanke, who was keen to inure her daughter against all traces of her father’s “poetic temperament” (a euphemism that covered a multitude of sins). Byron and I broke up a while ago (Romantics are so needy) but I always wanted to find out more about the daughter who was the one person that the poet genuinely seemed to care about – inspiring him to pen some (rather uncharacteristically) moving verses about fatherhood. He barely knew Ada, given his ex-wife whisked the child away when she was a month old, intending to bring up Ada much in the manner she had been brought up herself: with a thorough grounding in mathematics and philosophy, to counter the harmful effects of genetic excess that Ada might have inherited from her disreputable father. And to an extent, Milbanke’s strategy succeeded—Ada clearly had her mother’s own innate genius for numbers (Byron, in happier times, had dubbed his wife the “Princess of Parallelograms”) though this success was somewhat compromised when her gift was, er, diverted towards gambling, a habit that had landed both her father and latterly herself in considerable debt. 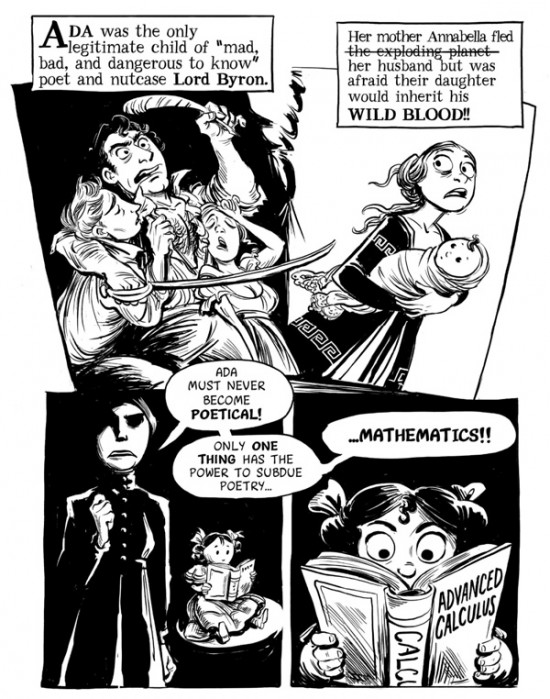 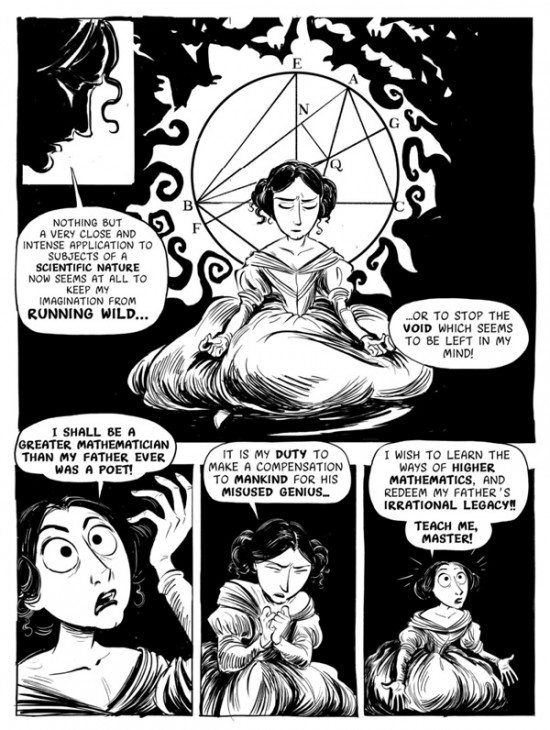 Lovelace’s talent was nurtured by another impressive scientific mind, the extraordinary Mary Somerville, who was responsible for introducing Lovelace to Charles Babbage. Babbage and Lovelace’s friendship swung between great admiration, affection and mutual respect as well as exasperation, and her work inspired by Babbage’s Difference Engine (an automatic mechanical calculator) has led her to be now widely considered the world’s first computer programmer. She grasped the workings of Babbage’s remarkable machine almost instantly, and formulated a set of algorithmic instructions that could be used by the engine to make calculations. Lovelace’s transformative work also speculated on how Babbage’s machine could be used as much more than a glorified calculator, and gestured toward the idea of the general purpose computer that is so ubiquitous to us today. 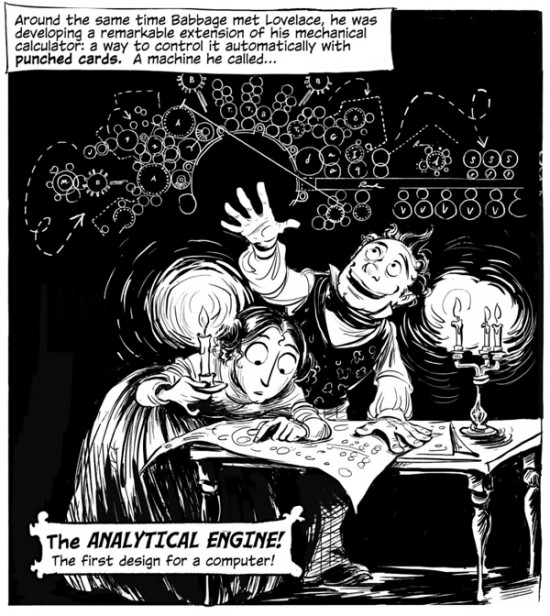 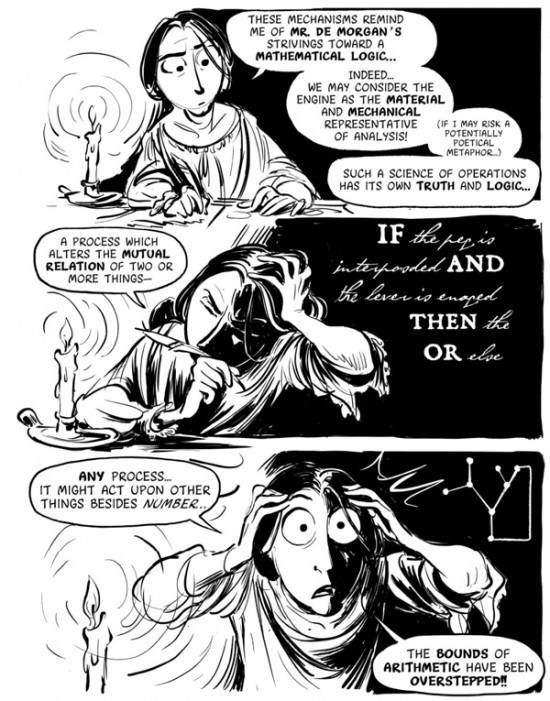 This recognition has fostered celebrations of women in technology such as Ada Lovelace Day – to be held on the 13th October this year. In fact, it was a conversation with the organizer of the first Ada Lovelace Day, for which Padua was commissioned to draw some illustrations, which spurred her to delve deeper into Lovelace’s work and history. The research caused the graphic artist to “fatally fall in love” and to create a webcomic around these characters, something she had never attempted before.

The vainglorious though ridiculously talented Babbage (who Padua describes as a “blend of Mr. Pickwick, Mr. Toad, Don Quixote and Leonardo da Vinci”) and the inimitable Lovelace (who Padua wishes “alternately to shake her, hug her, and throw her a parade”) were both quintessentially Victorian eccentrics, and Padua’s affection for her subjects is obvious. Her evident joy in working with the source material is again plain in her lengthy ebullient footnotes, which sometimes overwhelm the text, and on one noteworthy occasion even become part of the narrative action.

Padua collapses form and content in the most inventive way, using Babbage’s own wild imaginings of a capsule universe to anchor her own metaverse, in order to neatly sidestep Lovelace’s death and create an alternative history for her heroes. In the book’s parallel universe, Lovelace, rather than succumbing to her early tragic death, forms a crime fighting team with Babbage that excels at acts of computational courage and data-driven derring-do. (Padua also endows Lovelace with a fictional pipe-smoking habit, which as anyone who’s seen Juno will testify, epitomises cool.) Babbage and Lovelace’s universe is peopled by a cast of the great and the good of the 19th century (including Charles Dickens, Lewis Carroll, Isambard Kingdom Brunel and of course, Queen Victoria). At points Padua understandingly succumbs to some tinkering of an anachronistic nature in order to craft encounters that aren’t entirely historically accurate – George Eliot (and her hapless manuscript which gets digitized with some rather disastrous results) puts in an guest appearance despite no real evidence that the two women ever met.

Padua has a wonderful deftness of touch and stroke. She demonstrates how much we owe our inventive Victorian forebears, as well as how (worryingly) we might not have progressed at all – jingoistic nationalism, techno-utopianism and regressive attitudes towards women in technology are all much in evidence. While I’d certainly classify this book under “Geek level warning: High”, I defy you to not be delighted by this charming steam-driven romp and to not be at least a tiny bit galvanized into finding out more about this incredible duo, both of whom played a significant part in your reading of these words on this screen today.

Padmini Ray Murray is faculty at the Centre of Public History, Srishti Institute of Art, Design and Technology. She received her PhD for research on gender and embodiment in Byron’s poetry. She is also Editorial Advisory Board member for The Comics Grid.