Only last month, Sara Krulwich, a senior photojournalist at the New York Times recounted how, when she was looking for jobs after graduating, she was told that hiring a woman would be like “hiring half a person”. Times have changed, but photography is still a male-dominated field, and particularly so in Asia. But interesting efforts are being made to alter this. Last year, the Angkor Photo Festival in in Cambodia — the oldest photography festival in South Asia — had the highest number of women applications in the history of the festival and a majority of female participants too.

Every year, it invites young emerging photographers from around Asia for a week-long workshop, where they engage with each other, produce photos, and showcase them. Bangalore-based photographer Gayatri Ganju went to Siem Reap in December to participate in the workshop, and has lots to say about her experiences.

The trip had many firsts for Ganju: Shooting in a foreign country, being mentored by women, and returning to photographing people after a year-long hiatus during which she focussed almost exclusively on nature. By the end of her time in Siem Reap, she created an evocative photo series that explores the ways in which myths and legends influence contemporary Cambodian thinking about environmental change.

During her time there, Ganju commuted to a village called Kro Per every day, and produced a series about an eight-year-old girl, Sai Sou, who has recurring dreams of a wolf spirit called Pro Leng Sat Cho Cho (which translates literally to ‘spirit wolf’) that apparently haunted the forest that used to surround the village. But now with the forest gone because of rampant deforestation, everyone believes the wolf has vanished too, which is something Sai Sou can’t seem to accept.

What was the stint at the workshop like? And how did you pick a story?

Picking a story was the hardest part. I found that Cambodia is one of the most severely deforested countries in the world. I knew I wanted to work on a story about the environment and had done a ton of research on community forestry around Siem Reap. I wrote to a lot of people and tried contacting a bunch of NGOs. But as it often happens, it was only once I was there that I was able to pin down where I needed to be to start work. I stumbled across an ancient legend — about a giant, mythical wolf who is a guardian of the forest and both revered and feared by the people. The legend goes that if any harm comes to the forest he gives the entire village a stomach ache! I find these stories incredibly beautiful because they’re symbolic of a balance that has always been maintained by people who live close to the soil. So I found Kro Per, this tiny isolated village, in an area locally referred to as ‘Chakae Lou’ which means ‘cry of the wolf’. Once upon a time it was heavily forested, but now the landscape is now mostly rice fields.

The first day there I spent in different peoples’ homes asking them about the wolf — What did he look like? Had they seen him before? Was he still around? Listening to everyone’s stories gradually helped me piece together (mine) a story.

And then I met Sai Sou, an eight-year-old girl whose house I visited because her father was one of the village representatives working with the government on protecting whatever little of the forest that was left. But her father had recently fallen ill and barely left the house, so the family had to be supported by her mother, who had left for the season to work in rice fields.

Sai Sou is also the oldest child who looks after her three younger siblings. It was about five in the evening and she was cooking dinner for the family, but also listening closely to the conversation we were having. She was initially very reserved. After a long discussion about how much things had changed in the village, I went out to the back where the children were now playing and tried asking them about the wolf. The younger ones just giggled, but Sai Sou looked at me very seriously and said that she dreamed of him all the time. It was actually more of a nightmare where she was alone, it was dark and she was running very fast. The wolf was there too. She couldn’t say if she was running away from him, but every time she woke up and many times through the day, she felt him around. So, the next few days I spent at the village, I couldn’t think of anything but the wolf — I kept looking for him.

Who did you work with at the festival?

I was assigned two women mentors. The Singaporean photographer Sim Chi Yin and Iranian photographer Newsha Tavakolian. Very quickly, they established an atmosphere of trust. By the end of our first session together we’d already dived in to our histories, fears, our approaches to work and life. It got very personal very fast and I think that’s exactly the kind of people they are.

In the first couple of days, we were still pretty nervous about picking our projects. So when it was time for us to present our progress in each session, there’d be a lot of cringing as we sat around jabbing at our keyboards, scrolling from one image to the next. I remember Newsha banging her fists down on the table, stopping whoever it was who was speaking mid-sentence, with an exasperated “enough”! She said we just had to be sure about what we were doing and why, be positive about our work, and choose a subject that speaks deeply to us.

It was incredibly inspiring to be mentored by two Asian women photographers, both of whom have dealt with pretty tough subjects with a grace and closeness I can only hope to bring to my work someday. It made everything feel a lot closer to home, and their affirmation really helped me, while I was presenting my work for the rest of the time at the workshop.

How did you put together a structure for the series?

For the structure, I chose to weave the story in and out of Sai Sou’s nightmare and the search for the wolf till it wasn’t possible to differentiate between both states.

There’s this slightly morbid analogy photographers use: choosing pictures for your final edit is like killing your babies. It’s tough. Newsha gave us an interesting exercise where she asked us to think of our narrative like a piece of music. And to build pace and emotion like a song does, with each image flowing smoothly from the last one to the next. So, if your strongest picture seems discordant, it’s out.

Do you feel that the work you did in Cambodia was different from your previous photography?

Even as I arrived at Cambodia for Angkor, I think I was already undergoing a bit of a shift in my approach to story telling. I was becoming more interested in how stories are told. And the workshop gave me the opportunity to experiment with form, to try something new — blurring fact with fiction. Coming from a documentary approach to photography, I find this new space very exciting.

I’ve done a lot of people photography in the past, including a series called ‘Strictly Do Not Kiss Here’, about couples in public spaces. In the last year, I’ve thought a lot about the environment and my relationship with the natural world. After a hiatus in producing any personal work, this festival led to the seeds of a new project idea. I haven’t started shooting yet, but right now I’m going through a phase of obsession and sleeplessness while I think about how to begin it, and it feels a bit like falling in love.

Reproduced below is Gayatri’s photo series from her time at Angkor Photo.

The Girl Who Cried Wolf

Her breath quickened as she walked down the path to her house.

Everyone else in the village was already inside. The heat from the day rose from the ground and into her.

She felt something in the trees behind her but didn’t turn around.

She knew it was watching. 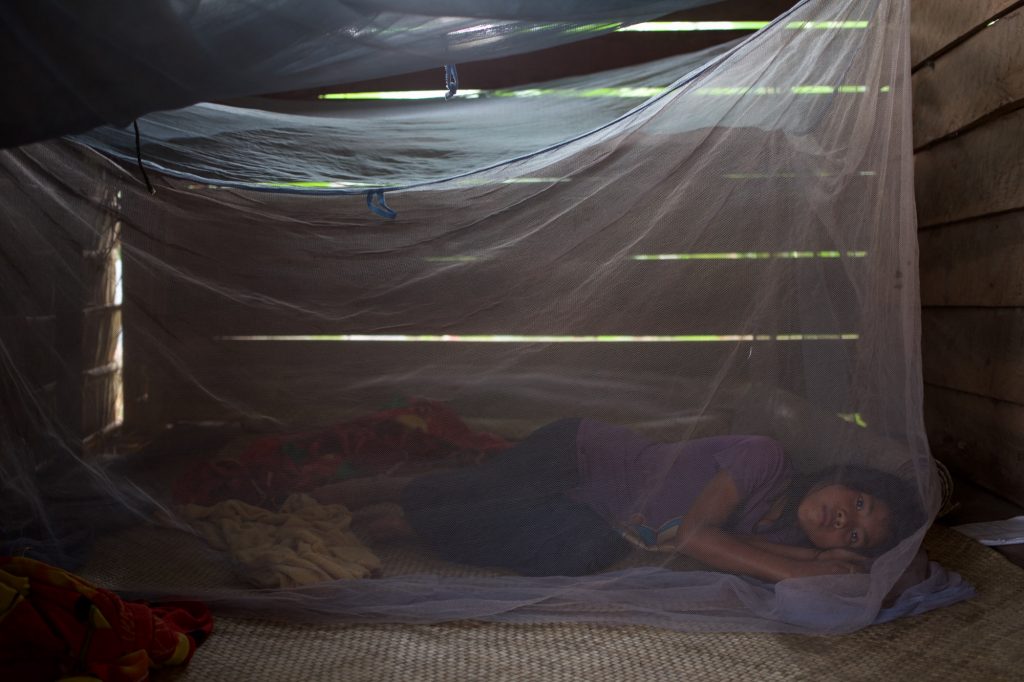 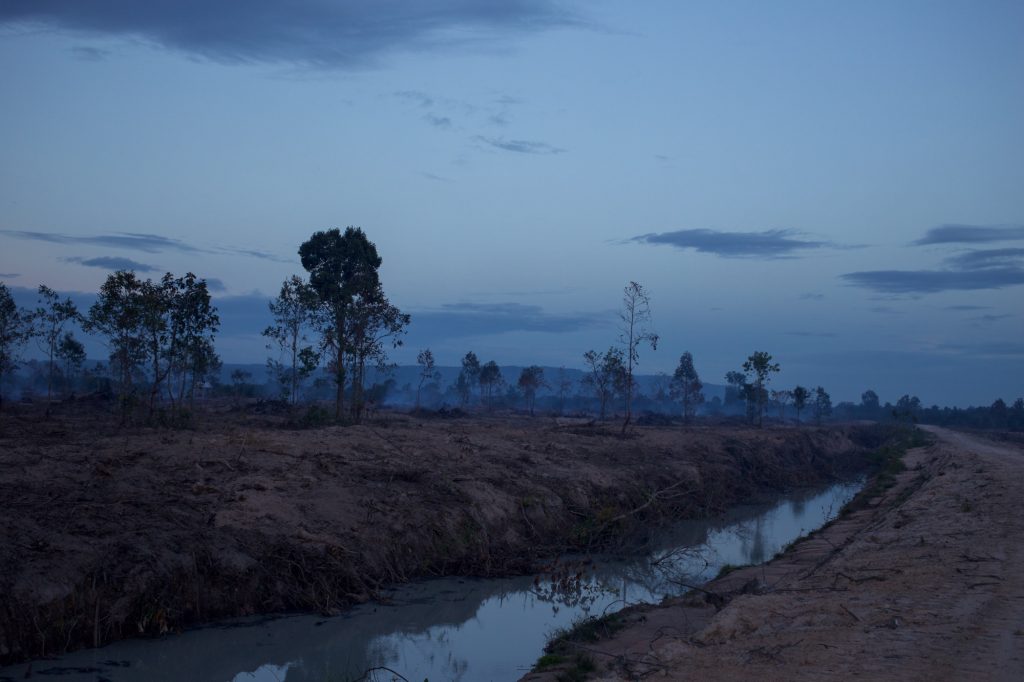 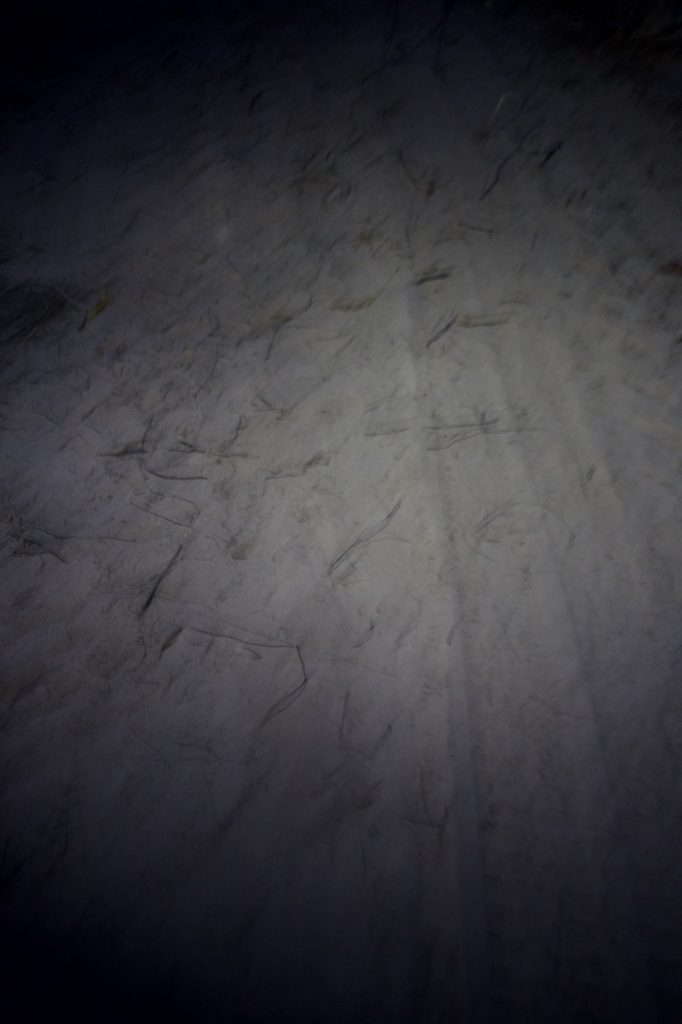 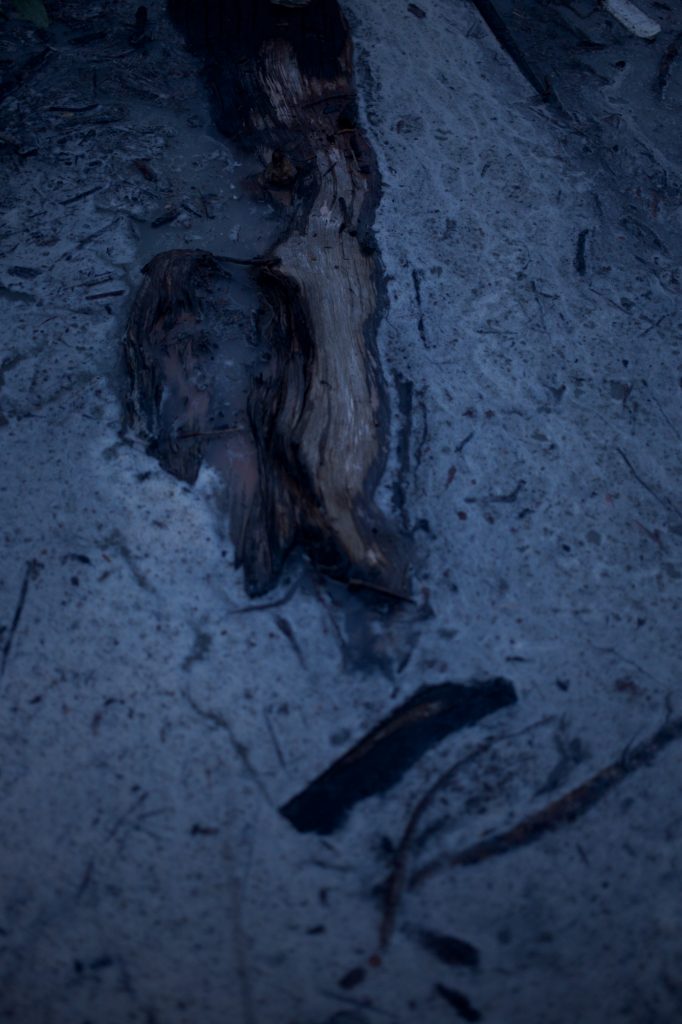 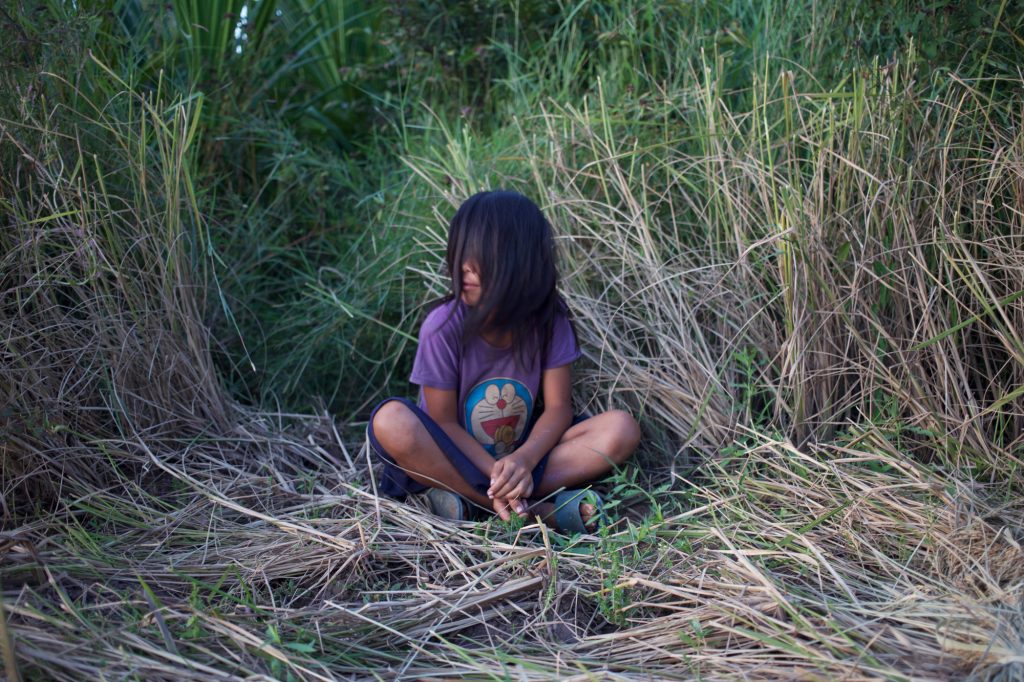 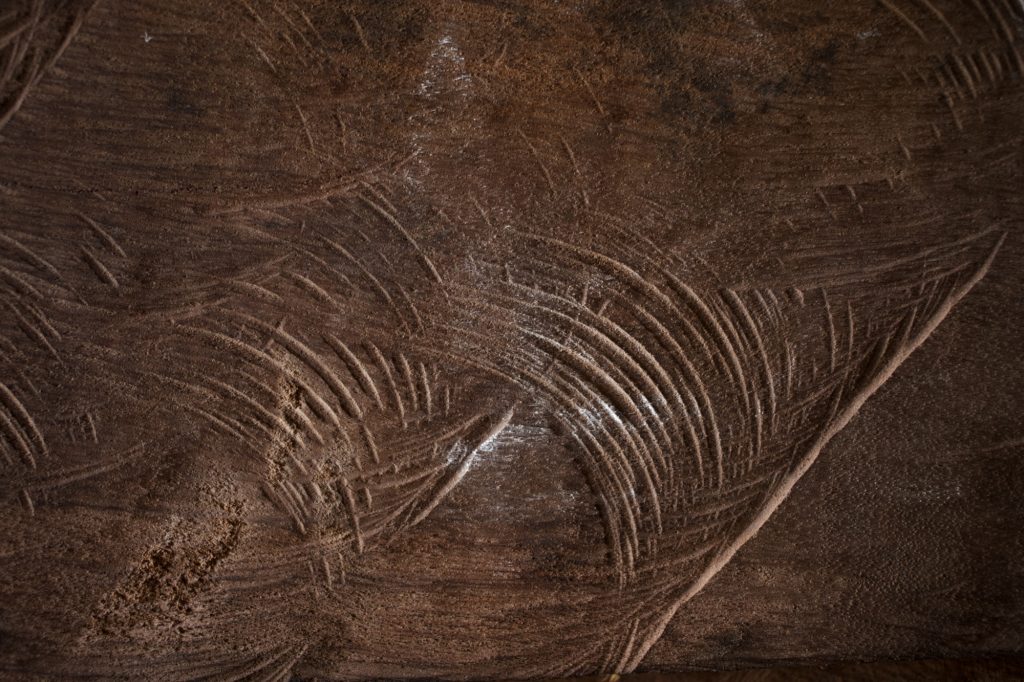 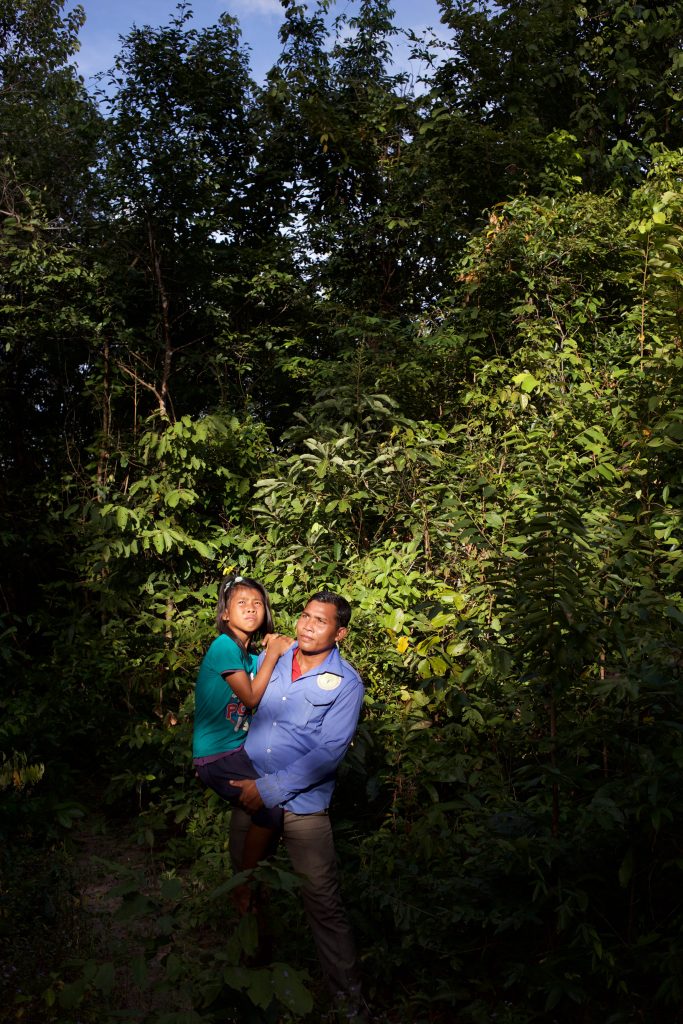 One Response to “The Girl Who Cried Wolf: A Photographer Tracks Down the Mythological Beast of a Girl’s Nightmares”