This is probably the first time in the history of movies that a sequel has been better than the original itself. Dedh Ishqiya is definitely one and half times (if not more) the movie Ishqiya was.Khalujan (Naseeruddin Shah) and his nephew Babban (Arshad Warsi) are back in style in this comedy of capers and love. 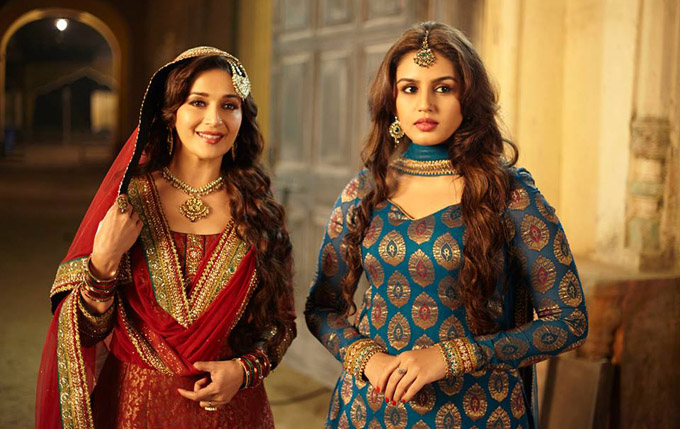 What is beautiful about both movies is that the central characters are bumbling criminals at best, but their desire to seek romantic love from strong women characters supersedes all. While in Ishqiya there was one mastermind (Vidya Balan) playing the game, this time around there are two (Madhuri Dixit and Huma Qureshi), who set both the screen and the plot on fire. Set on a Nawab’s estate, the story follows Khalujan seeking real love while looking to settle down: two birds, one stone. The main antagonist is a local MLA (Vijay Raaz) – an aspiring nawab who has the power but demands the respect that comes with the title. And the setting is one of a swayamwar, where a nawab’s widow (Madhuri Dixit) – as per the dying wishes of her husband – is to choose a poet husband to take his place in her life and the haveli.

Of course, the two prime candidates for the seat are the MLA and Khalujan, a thief pretending to be a nawab. But the swayamvar is merely a facade while the two women plan their own escape. The writing – not just in terms of dialogue but also in terms of scene, plot, characters – is nothing short of stellar, with references ranging from Batman to Ismat Chughtai’s short story Lihaaf. And of course, because this is a story about Nawabs, there is a recurring gag which refers to the old ‘Pehle aap, pehle aap’ joke.

Now coming to the Bechdel Test: The movie has two women in it, each a named character. They talk to each other – obviously, considering they have to plot an entire kidnapping (I can’t give more away without ruining the story for you). Almost every exchange between the two is either too short or too layered. But there are conversations which are not about men. Some would definitely say there were enough hints suggesting that the two women were deeply in love with each other and the male characters were simply props, means to a happy (for the two lovers) end – this is where the Lihaaf reference comes in. There is also a scene in which Madhuri Dixit reads palms on the terrace with a group of women, and she tells one of the women to drop a court case, explaining that she might lose the case and her land.