Fugly begins by telling us about how they are trying to tell us about everything that is wrong with Indian society today. You can see where it is all headed, right? (Border-line Mehul Kumar morals are thrown at us. Come to think of it, most of Fugly’s tropes are from movies of the 90s.)

Anyhow, I am not going to waste time telling you how I wasted three hours of my Saturday morning. That would be counter-productive, much like the movie – which begins with how our society (Delhi) is filled with disgusting men who lech at women and women who “slut-up” to please the men they want, while the leches continue to lech. The movie has women loitering around its periphery, while giving them all token moments of fauxmpowerment – where they either have scrotum-grabbing macho moments or moments where they “use their sexuality” – except for one instance when a doctor stands up to her male colleague at the risk of her patient-friend’s life (because that was the only way for the truth to see light). 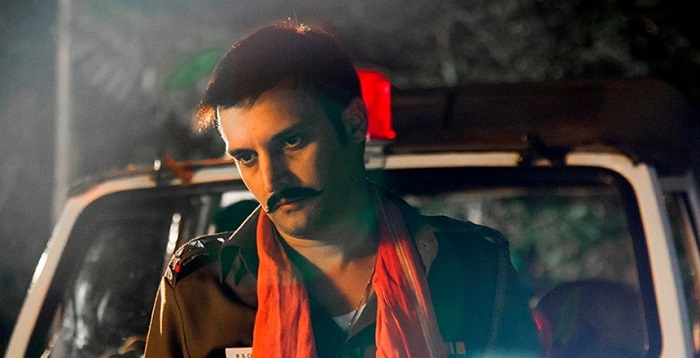 The lead gang is a group of three guys and one girl – Dev, an adventure sports entrepreneur (Mohit Marwah); Aditya, a sanitary ware shop owner’s son (Slumdog Millionaire‘s Arfi Lamba); Gaurav, a cabinet minister’s son (Olympic boxer Vijender Singh) who is also an aspiring boxer, and Devi, a shaheed army officer’s daughter (Kiara Advani). Other women characters that come and go include Sonia, a journalist who wants to tell their story (Vidushi Mehra), and Payal, a doctor (Mansha Bahl) who is Aditya’s fiancée. There is also Devi’s widow mother (Kunika) who is struggling to make ends meet. The lead gang’s lives turn upside-down when they try to punish a sleazeball who touched Devi’s butt, and in the process they run into ACP RS Chautala (Jimmy Shergill, whistle podu!), corrupt cop extraordinaire.

I know, I know, expecting an incoherent movie to pass the Bechdel Test would be asking for too much. But when you look at all the young, employed and hard-working women characters (as opposed to the corrupt, sleazy or just plain uninspired and unambitious men characters) in what is shown to be a horrible world, you do see openings for conversations between women, which are not about men. Especially in an incoherent movie. You can’t kill a dead zebra. Well, that is how the movie fails the Bechdel Test.

But ladies who like Jimmy Shergill (cue: whistle!) must find a DVD or a pirated copy at some point in the future just to watch the scenes with him – his character as well as his execution of it is pure chocolate-faced evil (cue: whistle!). Either my man-crush found that one oasis in the film and clung onto every frame he was in, or he just shone in contrast to the dullness of the movie. Help me solve this puzzle if and when you decide to subject yourself to Fugly.