Humpty Sharma (Varun Dhawan) is a shady dude who lives in Delhi, self-consciously styled after DDLJ’s Raj Malhotra (and well aware that he is nowhere as rich). Kavya Singh (Alia Bhatt) is a jugaadu girl from Ambala, engaged to be married to a boy she has never met just to make her father happy.

All Kavya wants is an expensive designer lehenga, for which she runs away to her uncle’s in Delhi. There, Humpty decides that he has found his Simran – a morally and culturally updated version of the traditional desi romcom heroine. That is, a girl who has no problem partying without permission and even getting into (and winning) beer chugging contests with boys and having sex with someone she knows she won’t be marrying. She still respects her bauji’s wishes though. Kavya doesn’t fall for any of Humpty’s Raj Malhotra tricks (obviously, since the Raj Malhotra software courtship module has not been updated to be compatible with Simran 2.0.) But she begins to like him, and they grow close. 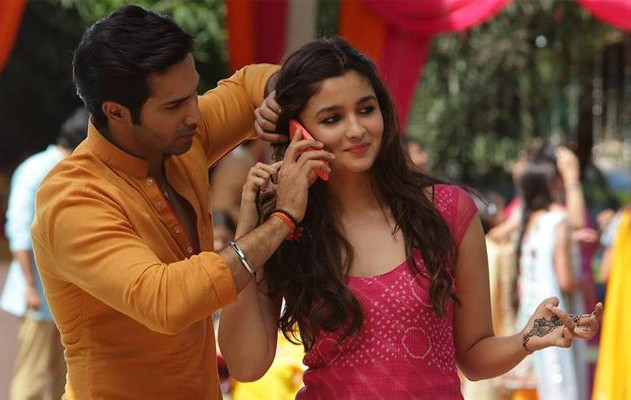 While the movie technically passes the Bechdel Test in the first ten minutes – have Kavya and her best friend Gurpreet video chat about wedding lehengas – its text book romcom nature (boys mostly only talk about girls and girls mostly only talk about boys) comes in the way of providing the women an opening of any kind. But it’s the second half of the movie where the women characters actually step in.

In this half of the movie, Humpty goes after Kavya, running into her family, which includes a grandmother, a mother, and a divorcee sister. The three women are shown to be wiser than the two men in the family – the brother and the father – who are hung up on having lost their honour because the divorcee sister had a failed love marriage. The grandmother and the mother are not as affected by the elder sister’s “mistake”, and are even shown telling the two men to move on – once nicely and once not-so-nicely.

Anywho, Humpty realises that the un-Simran-like nature of Kavya has changed the plot of his movie. So instead of pulling a Raj Malhotra on the family, he expresses his love for her as soon as Kavya’s father grills him. Once again, unlike DDLJ, the women of the family convince the men to give Humpty a chance. And the father challenges Humpty to find a single flaw in the boy that he has arranged for Kavya to marry. Unlike DDLJ’s Kuljeet character, this boy isn’t some goonish lout – he’s perfect. Like medical-professional-in-America-who-cooks-Italian-food-and-has-a-superhero-body perfect.

From there on, the movie becomes all about telling the audience that the two lead characters don’t want to marry each other because either is perfect, but because they love each other despite their imperfections. The plot by then is so inconsequential that it just feels like a buttload of plot points have been thrown in there only so that every trope in the Hindi romantic comedy perfected by DDLJ (and repeated a million times thereafter) has been updated to fit the new “cool” – the foundations for which, one can even say, were laid by Imtiaz Ali. (Here’s a piece you’ll like which talks about the women in Imtiaz Ali’s love stories.)

While HSKD felt like a mildly funny and musical ride at a Sunday afternoon house full show, with entire families cracking up and appreciating the software updates, the climax was quite a disappointment. This was where the makers could have worked wonders with the “cool girl” upgrade but I guess chickened out for reasons I can only speculate on. When Kavya runs away from home and Humpty finds her and convinces her to stay on good terms with her family, they get off a train only to be confronted by Kavya’s father and a bunch of thugs. Instead of the looming action sequence that should follow, Humpty gives her father a piece of his mind, accusing him of being thick-skulled. This, right here, was the lost opportunity – if only Kavya could have stepped in to join him, they could’ve perfectly subverted the whole “Jaa Simran, jaa… Apni zindagi jee le” scene entirely. (And while they do not forget to play with that iconic line from DDLJ, what they do in the movie can’t be called subversion. Let’s just call it gag reversal without ruining the climax for the readers. Meanwhile, makers of HSKD could do with revisiting the climax of Mere Brother Ki Dulhan where patriarchy is shown to be used against itself.)