Oculus begins with a flashback, in which 10-year-old Tim Russell (Garrett Ryan) shoots his father Alan (Rory Cochrane) after he witnesses him murdering his mother, Marie (Katee Sackhoff). Tim and his sister, however, claim that an evil supernatural force inside an antique mirror, the Lasser Glass, was responsible for their gruesome deaths. Not surprisingly, Tim is sent to a psychiatric institution, and his sister Kaylie (Karen Gillan) to a foster home. 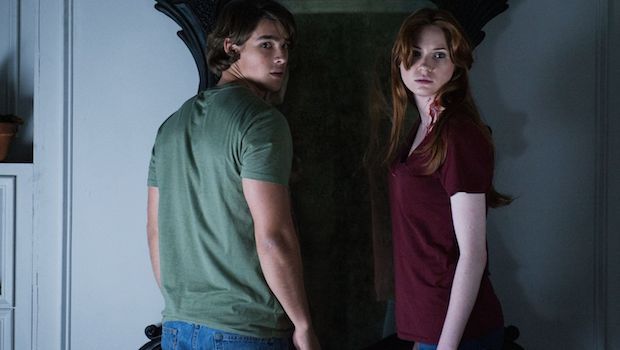 Now ten years later, Tim (Brenton Thwaites) has forgotten all about the ghost(s) in the mirror and is released following a healthy recovery. Kaylie, on the other hand, hasn’t, and is determined to prove her brother’s and father’s innocence. She manages to track down the mirror, and with an arsenal of video cameras, computers and spare bulbs, is ready to take the ghost(s) down. What follows is an interesting interweaving of narrative threads about the siblings with those of their younger selves.

Oculus isn’t a typical horror flick. The only scary thing about the movie was the memories that Kaylie’s fiancé Michael Dumont, played by James Lafferty brought back (One Tree Hill anyone?). The movie has only two female characters, both named—the mother and the daughter. One of them is already dead.

I liked kid-Kaylie more; she is better balanced between scared and brave. The older one banks a little too heavily on a plan that seems doomed to begin with. Maybe it was the acting, but she seems slightly cuckoo as she bosses her brother around into helping her. And guess what? Her plan fails. She dies. Marie doesn’t have much of a character either. She just gets to scream at the cheating husband and then cry herself dry.

I took for granted that these two would talk to each other (they were related by blood, after all). I was slightly too trusting, there. In the whole movie, the two barely have a sustained conversation. In one scene the kid asks the mother for a cell-phone. That was it. I wasn’t convinced that it satisfied the second criterion, much less the third. But later in the movie, Marie asks Kaylie about “the woman in the office”. Though Kaylie doesn’t know that the ‘woman’ was really a ghost, she refuses to tell her mother about it. She loves her father all too dearly. The story had gotten better after the interval, and I was in a better mood thanks to the little piece of Bourneville that they pass around at INOX. So I gave in. Oculus does—by the skin of its teeth—pass the Bechdel test.