(Note: I won’t waste time telling you what the movie was about – if you haven’t watched Queen, you need to go out there and watch it. Now.) 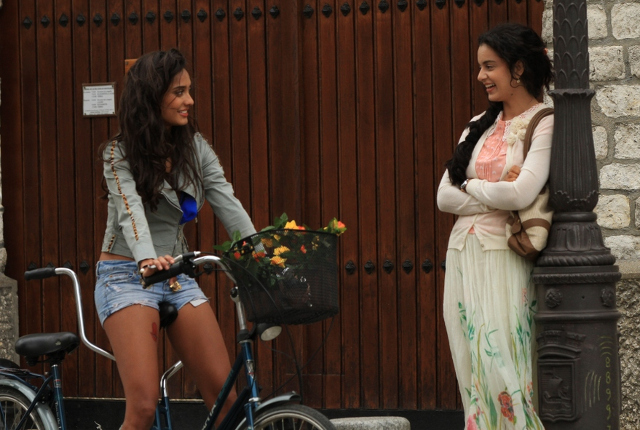 There’s nothing like watching Queen at a multiplex in Kandivali West (Mumbai) with a couple of middle-aged ladies sitting on one side and a group of giggling teenagers sitting on the other. Fortunately and unfortunately, I caught the morning show in a packed house – something I am not used to. During the first act, everyone was conspicuously silent. Like they were all waiting for Rani (Kangana) to just get over her funk and get to Europe and start the madness (I was glad that the writer-director took his own sweet time getting there).

“What is happening?” was the first thing either of the ladies (to my left) said right before Vijayalakshmi (Lisa Haydon) was introduced. (What was happening: a loud make-out session off screen – ridiculously fake and loud, perhaps for comic timing). These same women squealed when Kangana faced the camera and made a closed-eyes-kissy-face to rehearse before kissing her Italian salt-pepper-haired crush. Said one to the other when Kangana’s fiancé came crawling back to her, “If this movie ends with her taking him back, I’ll pull my sandal off and throw it at the screen.” They clapped when Kangana rejected him soon after to go attend a rock show. At the end of the movie, the aunties hugged and one thanked the other for dragging her to the morning show.

The teenage girls and boys (to my right) were awkwardly silent when it came to any serious exchange between Kangana and her fiancé. “That’s so cute,” said one of the girls reacting to the fiance’s romantic gestures to woo Kangana. (“That’s so stupid. He looks like a langur,” said the aunties.) The boys laughed whenever Kangana made a fool of herself on facing someone who spoke in a language (French, European-pidgin English or just English with a non-Indian accent) she did not understand. The girls squealed when Lisa Haydon gave Kangana a makeover and pushed her to be more out there with her sexuality (including grabbing her boob at one point, and at some point her ass when she pushes Kangana to dance atop the bar). The humour that both parties seemed to enjoy: the dehaati bits, desi Kangana’s culture shocks in Europe and, of course, the Indian family bits.

While the middle-aged ladies and teen gang didn’t have anything to say (except maybe laugh at the right moments) when Kangana finds it shocking that she has to share a room with the three boys in a co-ed hostel in Amsterdam, two uncles sitting right behind me explained the scene to each other. “Hotels are very expensive in Amsterdam. The hostels are the best way to stay for cheap.” — “Yes, yes, it is very common there.”

If this movie had failed the Bechdel Test, I’d have been depressed as I wrote this (there was already less Lisa Haydon than I had anticipated). But there were quite a few lines exchanged between the two women that were not about men. The one I remember best is about burping – Lisa Haydon quotes something she once heard: “Why fart and waste it when you can burp and taste it?” A drunk Kangana tells her how she had been taught that burping isn’t considered good when women do it. Then the two women push a few burps out. The aunties laughed. The teenage girls screamed “EWWWW!” The teenage boys sat in silence. Through the movie, there were only a handful of people in the movie hall who rolled with laughter throughout. It was like the rest were sitting there absorbing things, assimilating them into their consciousness.

At the end of the movie, most people waited (even if in the aisles) for the end credit sequence to end – something that doesn’t happen often. 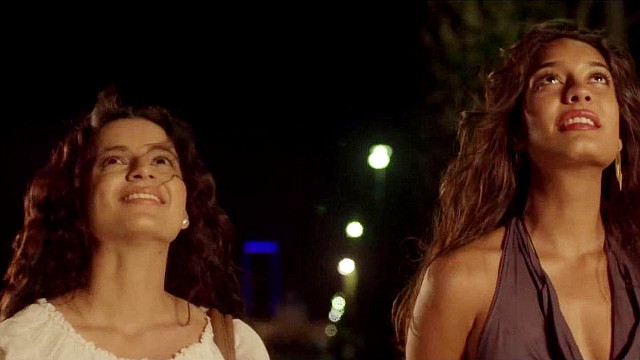 But there was one thing I couldn’t, for the life of me, understand – WHY DID THEY HAVE TO PIXELATE A CLOSE-UP SHOT OF A BRA IN ONE OF THE SCENES? It wasn’t pixelated when Lisa Haydon pulled it off and wrapped it around Kangana’s head. Its reflection in the mirror wasn’t pixelated either. Only the close-up was. It wasn’t the only shot of a bra in the entire movie either. (Of course, the clever people managed to sneak in a totally naked picture on a box in the scene at the sex shop.) But overall, this was a ‘clean’ film – there was cussage only once when Lisa Haydon’s character says the f-word (if I read her lips right, because it was muted). There were no drugs (considering we’ve seen both Kangana in Tanu Weds Manu and Lisa in Aisha hold a joint on screen). Yes, you have a musician, an angst-ridden and alcoholic artist and a crazy-depressed Japanese dude in Amsterdam BUT no drugs!

And lastly, here’s me imagining what Žižek would say (accent and all) if there were a Pervert’s Guide to Queen:
After Rani is rejected by her patriarchal douchebag of a fiancé (note: called Vijay – Victory), she decides to go to Paris, the city of love, all by herself. She is constantly shown to be running away from the phallic Eiffel tower. It is overbearing because her fiancé once promised to treat her to the restaurant at the top (the peak of pleasure, considering according to the story they’re both virgins). After she meets Lisa Haydon (called Vijayalakshmi, a portmanteau of the names Vijay and Lakshmi, the latter being the Hindu goddess of fortune and the embodiment of beauty), she chooses to go visit the Eiffel tower with her – cut to a shot of the tower as the two girls look at it in awe: it is sparkling. A couple of scenes before that, we see how Vijayalakshmi has helped Rani be more in control of her sexuality without inhibition (while wearing a hat and a fake-moustache for funsies) by giving her a wardrobe makeover. That is also the scene when Kangana takes a selfie in her first ‘revealing’ outfit (picked out for her by Vijayalakshmi). And then we don’t see Vijayalakshmi for the rest of the movie after Rani leaves Paris (not even in the end credits Facebook timeline animation). Perhaps Vijayalakshmi was Rani’s alter-ego; her inner goddess: the self she found after a sexual awakening.