In the second family drama we’ve watched this week, Bhargava (“Kichcha” Sudeep) is a dashing business tycoon who works for his grandpa (Prakash Raj) in Zurich. He wears Armani suits and designer accessories, and can beat up a team of gunmen at such speed that it takes slo-mo to prove to you that it’s real. He so cool, he even has his own theme song (“They call him Ranna…He’s a Chinna…No one to match him…Yo yo yo yo”), and if there’s ever an obstacle in his path, he defeats it with bundles of cash. That’s if his personal team of suited-booted men with headsets can’t do it for him first. 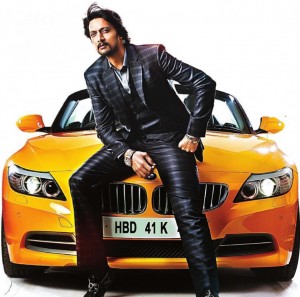 Bhargava’s family has a sad past: his grandfather and paternal aunt Saraswati (Madhoo) are estranged, because the super-rich grandfather objected to her marriage to a small-time lawyer and shot the poor man in the arm. They never saw each other again, but now the grandfather wants forgiveness and longs to see his beloved daughter one more time. Bhargava is dispatched to India to try and reunite them. He hides his identity from his aunt and her family, and finds employment in her palatial home as a driver under the alias Chandu.

The problem is, being a fancy dude in real life who wears Luis Vuitton belts and Giorgio Armani sunglasses (when we first see him in the opening act through the cross-hairs of a gunman’s weapon, the crosshairs flash digital messages indicating the brands he’s wearing back to the gunmen. Iggy Azalea and Charlie XCX, you just got pwned), Bhargava doesn’t know what it’s like to be working-class. He doesn’t have the body language of a driver, the clothes of a driver, or the attitude of one (more on this in a bit), which gets him into trouble now and then, and it nearly gives him away to the others. His aunt figures out who he really is, but she holds her tongue, waiting to find out what his intentions are.

Saraswati lives with her husband Prakash (Devaraj) and their three daughters. Indira (Haripriya), the oldest, is sweet and well-behaved, while Rukmini (Rachita Ram), the middle daughter, is smart-mouthed and full of attitude – the sure sign of a bad girl in cinemaland. Bhargava falls in love with Indira (marrying cousins is an accepted cultural practice among some communities in south India), but finds out that she’s in love with a boy who is being forced to marry another girl from a family of goons and gangsters. Bhargava goes to rescue Indira’s lover from the goons on the day of his wedding, and brings him back home so the lovers can be reunited. In the process, he falls in love with the other sister, Rukmini, who unwittingly joins the rescue party. A head injury temporarily messes with her memory and makes her docile, and she even changes out of her tight jeans into a sari. Unsurprisingly, it is this meek sari-wearing version of her that Sudeep falls in love with. 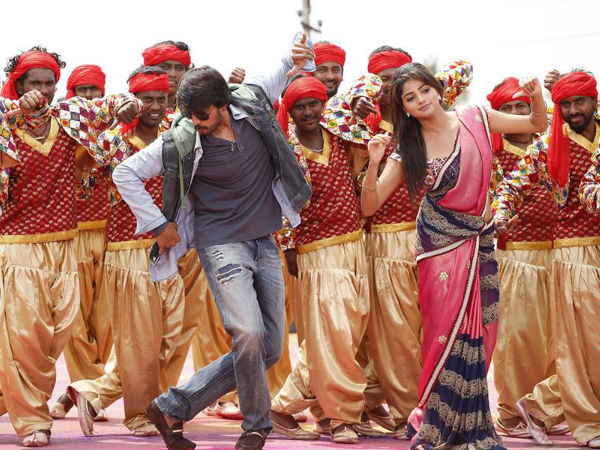 After some more drama, terribly boring jokes and lengthy sermons that drag the movie on for ages, it all ends happily for everyone concerned, including the grandfather and aunt, who are reunited.

Cardboard characters make this a boring movie completely devoid of warmth. But even though Madhoo’s acting is rather wooden, Saraswati, the aunt, is the only convincing character in this movie. She’s intelligent, has agency, and lives on her terms. She married the man she loved against her father’s wishes, and wears flashy jewellery bought with money she’s earned.

However, there’s plenty in this film that makes zero sense. For starters, the film’s title, Ranna, presumably refers to the 10th century Kannada poet of the same name, but good luck figuring out the link between the two. And even some good ol’ willing suspension of disbelief can’t help you get over the small question of how 50-year-old Prakash Raj gets to play the grandfather of 41-year-old Sudeep and the father of 43-year-old Madhoo (the aunt that Bhargava frolicked with as a child). Much of the dialogue has been thrown in with little rhyme or reason: my favourite is when the movie closes with the thrilled grandfather saying, “Ha ha! The Devil is back!” Who he’s referring to is anyone’s guess. The crazy thing is that it’s not even as if this is an original story – it’s a remake of the 2013 Telugu film Attarintiki Daredi. There was plenty of time to get the tiny things right!

But here’s one thing that is impossible to overlook in the film: nothing in this film is well-thought out or nuanced, but even so, it’s lazy ideas on class are particularly screwed up. Never mind that the family is rich beyond belief – Saraswati and her husband have an enormous fancy home and a fleet of cars including SUVs and a BMW, and Bhargava has his own plane and a predilection for giving away briefcases filled with cash. When Chandu/Bhargava transgresses his boundaries as a driver (he walks into the women’s bedrooms, and even Rukmini’s bathroom at will; he offers unsolicited advice and speaks out of turn; he behaves like a member of the family; he isn’t servile enough), it’s only okay because *wink wink* he isn’t actually a driver, lol. When Bhaskar (Sadhu Kokila), a former domestic worker for the family who moved to Africa and got rich, returns and asks for Rukmini’s hand, he is a ridiculous, pathetic figure only there to provide comic relief. When Bhargava first walks into the aunt’s family home as Chandu the driver, the women of the house exclaim over how handsome and tall he is. Bhaskar, on the other hand, is short, fat, plain and dark, and now that he’s rich, he’s clad in clothes that indicate he was going for an MC Hammer-meets-Lezz Lewis look. And when another worker at the house speaks to Chandu/Bhargava as an equal, Bhargava loses his shit, telling him that he has men like him to serve him tea and coffee, and beats him up for daring to speak to him in a familiar manner.

The movie is peppered with casual sexism and the usual sexual harassment passed off as flirting. Bhargava can merely transfer his affections from one sister to another (these leddis, they’re all the same, amirite?) because he develops no real bonds with these women. And there’s a crazy scene in which the gangster family of the girl Indira’s beau was supposed to marry shows up at the aunt’s house seeking retribution. They’re enraged when Saraswati’s husband offers monetary compensation, and to defuse the situation, Saraswati offers Rukmini’s hand in marriage to the jilted girl’s brother. He’s a knife-wielding villain, but Saraswati offers up her daughter with no qualms at all.

The film technically passes the Bechdel test because of one scene in which Rukmini is seen in her towel, shouting to her relative that there’s no hot water in the bathroom. The relative shouts back that she’s heated water for her on the kitchen stove. Rukmini asks her to bring it to her in the bathroom, because she isn’t dressed, but the aunt shouts back that she’s busy. (What a way to pass the Bechdel Test.)

The film is really an excuse to focus on Sudeep, with extended shots of him smiling into the camera with rippling hair and fancy clothes, striding up and down to a crazy soundtrack telling you how awesome and macho he is. (Very literally: a song exhorts you in English to “Feel the power of macho Ranna”.) The overwhelmingly male audience in the cinema I was in loved it all, especially when catharsis takes place towards the end, when Bhargava is trying to run away with Rukmini and persuade his aunt to reconcile with his grandfather. Bhargava cries as he delivers his entreaties, with flashbacks to the wonderful times he had with his aunt as a boy. The scene ends with him throwing himself at his aunt’s feet, hugging her legs and weeping as she pats his head and strokes his hair. And all problems are solved – by the man-child hero having a good cry.

Your Saturday Jeans: Angry Hanuman and the Foreign Hand