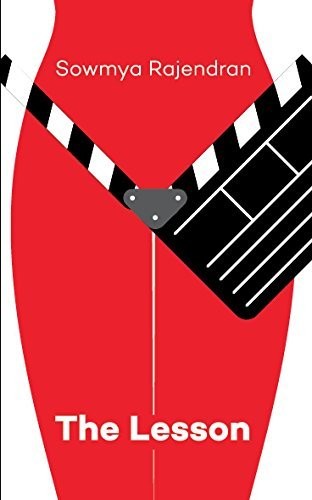 The Lesson, written for adults by children’s book author Sowmya Rajendran, has been doing the rounds and getting largely positive reviews. The project is interesting – even unique – in the midst of many on-going debates about women “asking for it” when they are raped. And perhaps this situation is even crying out for a dystopic novel. The Lesson ticks many of the boxes: a strong heroine, her refusal of victimhood, a “message” (though I thought a great deal about Doris Lessing’s warnings against messages or projects of deliverance in literature as I read this book). Scratch a little deeper and the problems bubble very quickly to the surface. The impatience that comes through in the tone of The Lesson suggests the pervasive commonsensical nature of a brand of popular feminism. The Lesson is a bit like the article that went viral a few months ago, comparing consent with a cup of tea: it makes a one-dimensional affair of matters that deserve a far more complex reading.

The book tells the story of a time when the government has hired a Rapist (in capitals – no characters have personal names) to punish women who have “asked for it”. This ought to be chilling, and in the first few chapters, it is. The protagonist is a woman we only know of as The Second Daughter, who has been sentenced to rape for seeking a divorce and being brazen about it. She evades the rape at first, hiding out at her parents’ home and faking a pregnancy. Eventually, The Second Daughter has a moment of awakening, after which she finds a way to confront her accusers and refuse her victimhood. This character is immensely relatable to the average upper-middle-class urban woman: an Anthropology PhD student with opinions and a perpetual sense of outrage. This is not a bad thing at all. The question is only if we might think of less heroic heroines: what, I kept wondering does The Rapist’s wife, alluded to on and off, feel about all this? Are Rapists like Executioners in our society: people who perform a legally mandated task that is still socially reviled? Does recruitment as Rapist have anything to do with caste? The book left me wanting to know much more about the world The Second Daughter lives in and less only about her deeply personalised feelings of injury at the actions of this state.

The dystopic universe in which the book is set is also relatable, particularly to the middle-class’s pet concerns: dress codes – the book has a Dupatta Inspector – moral police and the perpetual demand to “adjust” to situations rather than complain. But that is precisely also its problem. It is a staunchly middle-class dystopia: doing nothing to dispel any of this class’s favourite stereotypes about rape. For instance: who commits rape – apparently, as in Chapter Sixteen’s elaboration of the histories of The President of the Adjustment Bureau, either brutish men generally more interested in the crass domains of exams and social mobility than books and debate; or worse, as in the character of the rapist, working class immigrants from small towns. Might the book not have been more interesting if The Rapist was a perfectly “nice” man: like The Second Daughter’s father? Also: what does a feminist/dissenting woman look like? The answer to the latter is disappointingly stereotypical: apparently bookish and academic – “The feminist and her friends called themselves a reading group” – as well as somewhat more oddly, “rich and intellectual”. Any kind of transformative agency is denied repeatedly in the narrative to characters that fall outside that definition. The less intellectual “Eunuch” discussed below is more fodder for pity than an agent of any kind of critique; and The Moral Policeman’s wife, an interesting character, is left undeveloped.

The tone of the book is satirical, though it remains ambiguously so, lending The Second daughter a tone of sanctimony that intensifies towards the end. She is the reader’s voice of common sense, the moral compass in a cast of others who range from complacent – as her father, mother and sister are, to downright violent – as The Second Daughter’s husband who, at various times, forces himself on her, and pulls her teeth out. The last heroic moment: “The Second Daughter removed the mask from her face and tossed it to the audience, at the sea of pale faces that stared at her from the darkness. This, said the second daughter, as the spotlight fell on her, is who I am,” sets her up again as a kind of Boadicea: the lone hero toiling against the forces of darkness. Given that the book ends at this point, the meanings of this moment are left to rhetoric.

A further sub-plot is that of a character called The Eunuch. This name is particularly grating – the word “Eunuch” is these days, a slur: a bit like “faggot” in the lives of transgendered and intersex people. If the name was ironically used, then the book gives no particular indication of it: we have no real history for this character. More oddly, the story associates none of the gender non-normativity that the word “Eunuch” suggests with this character. Instead it appears that The Eunuch is simply an infertile person. Further, unlike The Second Daughter, who acts with outrage and heroism, The Eunuch is phlegmatic, inspiring disgust or at most sympathy. His ample body flops around lazily on the ground, in contrast with the always-in-action figure of The Second Daughter. The Eunuch is seen “watching television with his legs up on the beanbag, a mug of beer in his hands”, and when he finishes his film we read: “The Eunuch went to the mantelpiece and dug his nose. He rolled up the snot to the tip of his finger and plastered it gently over the photograph [of his father].” Most ridiculously, he is obsessed with a motorbike and ends up killing himself when it falls into disrepair. If this story was meant to be chilling, it fails, and rather offends, given how it sadly appears to perpetuate the idea that those who fall outside the normative lines of gender are not only ugly and disgusting, but also childish and incapable of social action.

This comparison is particularly made evident in the denouement of The Second Daughter’s story. While in the beginning, no appeal to maternal instinct could rattle her, it is eventually her dreams of a “little imp” – a daughter – for whom the world has become dystopically dangerous that spur her to action. While The Eunuch lives in more than one sense a sterile and unproductive life that seems almost thrown away in the most shallow of circumstances, The Second Daughter is driven to heroism by precisely the thing that is The Eunuch’s failure: the prospect of bearing children. Rajendran’s book, which appears to advance a critique of family life – in the heroine’s demand for divorce, and criticism of traditional gender hierarchies – and of sexual violence, oddly ends by reinforcing authority in these institutions.

The Lesson is a book that might have had the potential to disturb and provoke a middle-class that increasingly finds comfort in a gender politics that is distanced from class, caste, and any substantive critique of family. After all, that is the realm of good dystopic and allegoric fiction: novels like The Handmaid’s Tale, Margaret Atwood’s story of a future, in the United States, when women are reduced to child-bearing machines, and a deeply religious government has instituted apartheid-like laws that result in the relocation and massacre of ethnic minorities. Tara Books’ new offering The Boy Who Speaks in Numbers is an apt comparison. This book is also a novella that deals with an extremely complex context – the war in Sri Lanka. What Mike Masilamani manages in The Boy is to tell simple, unheroic stories that nevertheless reveal a starkly complex context. The Lesson chooses instead to take an easier path: with a relatable heroine, bubbling with anger and outrage, a hateable rapist – who is given a history, but still doesn’t emerge any more likeable than before – and a “Eunuch”, who is expectedly both pitiable and ridiculous.

Sneha Krishnan is a post-doctoral researcher at Oxford, and is spending her time thinking about how to work art and fiction into a human geography curriculum.