HomeVaanthiThis University Wanted its Female Students To Wear ...
May 31, 2017

“From an aesthetic point of view, it is better for young women to wear a dress or skirt, and a nice revealing neckline,” read an email sent by a Belgian university to its graduating students. Men were, of course, asked to wear a nice suit to the event.

The email circulated by Brussels Free University was posted on the Facebook page ULB Confessions, following which the university apologised. The post has more 6oo comments and shares, ranging from outraged to sarcastic. One commenter wrote (roughly translated), “Is it true that doctor rhymes with boobies?” 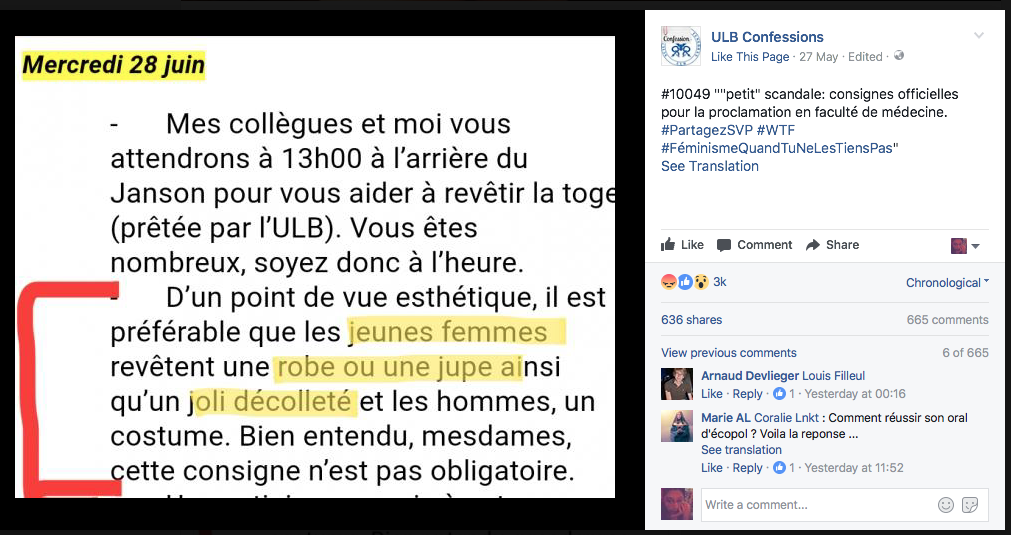 The faculty of medicine, which sent out the email, then apologised on Facebook saying that “the instructions related to the clothing of young graduates are contrary to the values displayed by the ULB and the faculty.”

The scene isn’t very different from home, though. For example, engineering colleges in Tamil Nadu are known for their strict dress codes. In 2014, MCC tried to impose one. Then in 2015, it was the turn of Sri Sai Ram Engineering College. A woman studying in a college in Coimbatore was sent out of the lab because her hair was untied. Hostels have early curfews for women, buses and classes are segregated… these stories aren’t new.

Even as recent as four weeks ago, a young woman taking the NEET exam was forced to remove her bra before she sat down for the exam. It might not fall under the traditional dress code rules, but you’ll have to agree that it was bizarre.

A survey conducted last year by Bhargavi Suryanarayanan, a humanities student at IIT Madras, and Vandana Venkatesh, a recent law graduate from the National Law University, Delhi, found that regressive college rules for women weren’t just unfair, but it affected their mental health too.

Why can’t universities do their job and stay out of our clothes?

Shit Has Hit the Fan With Raya Sarkar’s Post On Sexual Harassers in Indian Academia. But Will It Just Stop There?