In her excellent essay on the Malayali male, Mundu, Meesha, Kumbha, Koda, Geeta Doctor says, “It’s the mothers, aunts and grandmothers who control the destiny of the pampered males. They see to it that he has his daily Malabar banana, his egg fried and sunny-side up-‘Moneh, have you had your mutta?’- […], and that last thing at night he retires to bed with: a warm and milky malt flavoured drink.”  Samar Halarnkar, journalist and author calls it the Mera-raja-beta syndrome which “manifests itself in doting mothers who indulgently serve their sons and adoringly watch them eat”.  It is this syndrome that he takes on in his intriguing new cookbook, The Married Man’s Guide to Creative Cooking.

The title, he explains, is a nod to the married man who is the author. As opposed to it being a book written exclusively for married men. Halarnkar is a calm evangelist but evangelist all the same. Men should cook, he says. And he is quite aware of the brick wall of indulgence he is attacking.

According to Terry Pratchett, “The Monks of Cool, whose tiny and exclusive monastery is hidden in a really cool and laid-back valley in the lower Ramtops, have a passing-out test for a novice. He is taken into a room full of all types of clothing and asked: Yo, my son, which of these is the most stylish thing to wear? And the correct answer is: Hey, whatever I select.” Halarnkar is a Monk of Cool writing strictly what he practices. He is a highly regarded journalist and the former managing editor of the Hindustan Times. He is also a stay-at-home dad to three year old Alia (who looks exactly like a quiet, large-eyed version of Dora the Explorer).  He cooks all the time and writes a lot about cooking in his Mint Lounge column and in his blog. Each chapter of his book begins with a short stretch of his own writing on his experiences inside and out of the kitchen, on food in general, his family and the sources he drew inspiration from, followed by the recipes themselves (expect everything from meat loaf to cabbage stir fry with pesto sauce to beef pickle). 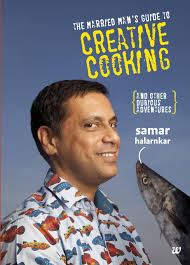 It is in one of these chapters, he explores the reasons why men must cook, and the reason why most Indian men don’t: the mera-raja-beta syndrome. Whether you are a moneh, a magga or a beta, whether you are in the South or in the North, the idea is the same: Indian mothers seem to take pride in ensuring that their sons never have to set in foot in a kitchen. Ever. Boys grow up looking at cooking and everything to do with it as “women’s work” and so take great pains to distance themselves from it, only daring to venture forth into the kitchen when there are no wives or mothers around to do it for them. It becomes a point of pride to be the man who has everything done for him, and being a married man who chooses to cook is sure to inspire raised eyebrows and the usual comments.

Halarnkar began  cooking quite early, with his busy mother “freely using her two boys as household labour”. Over the years he’s continued cooking for himself and for whoever else would like to be fed, using what is at hand, much like a ‘roadside mechanic’s fiddling and tinkering’.  It’s left him a very cheerful kind of cook — unpretentious, experimental, with an appetite for two breakfasts, new spices and a reluctant appreciation for vegetables.

Being introduced to the kitchen at a young age is the only way to encourage a culture where men cook. He says, “Men don’t cook, they’re not encouraged to cook, and then they distance themselves from it, the idea is that “this has nothing to do with me, this is women’s work. It makes them complete chauvinists, and when it comes to roles in life, Indian men tend to be quite rigid and inflexible when it comes to doing things around the house. And that also forms their attitudes in the world outside.” In his book he says even more succinctly, “If man needs to progress, if the Indian male has any hope of not making a further ass of himself, he needs to get back into the kitchen.”

At his Bangalore home, Halarnkar answered some of our other questions about the book.

What kind of reaction do you get from different sorts of people, particularly other married men, when they hear of your interest in cooking and the fact that you wrote a cook book?
I think they think I’m a bit of a freak, or something. The first thing say is usually, “Oh your wife is so lucky!”. The usual stereotypical stuff.

What do other members of your family, particularly those of older generations, think about your participation in the kitchen?
They’re usually very happy. Sometimes I think my father has a bit of a problem with it, staying at home with the baby, cooking, at the peak of my career.

Have television shows and an overall foodie culture contributed to men cooking?
I don’t think it has much, maybe marginally. It’s very good if they do, but I personally haven’t seen it, among my friends for example. With couples who are both working, even if a guy comes home early, he sits around waiting for the moment his wife comes come so she can start cooking, instead of just doing it himself. I don’t think the Indian man has made that change, he still expects women to do everything for him.

Many recipe books written by men tend to include a lot of traditionally “male-centric” recipes, focusing on grilling techniques and red meat. Do you believe there’s a real difference between what men and women want to cook, and want to eat?
I don’t think there really is. My book is the record of the things I’ve eaten and it’s sort of built around all my travels. The recipes are purely what I cook at home. But I don’t think there’s any fundamental difference. In my case, the only real difference is that my wife’s a vegetarian. Other people, not really. All my cousins are non-vegetarians and they love their red meat.

Do you cook differently for different audiences?
I do. With friends who aren’t very experimental, I tend to stick to something safe, like chicken or vegetables. But if they’re people who don’t mind, I’ll cook them whatever I would want to eat, pork, beef no restrictions.

Does your daughter prefer the food prepared by either you or your wife?
For the first six months, my daughter was my biggest challenge, she wouldn’t eat anything I cooked, and of course, I didn’t know how to cook for a baby. But now she eats whatever I cook. I do cook specifically for her, but now she eats pretty much what we eat, as long as it’s not too spicy. She likes to try out new things.

“Women are better cooks, men are better chefs.” What are your thoughts?
I don’t know. Men do tend to be better chefs in the professional world, it’s quite obvious, I can’t seem to figure out why. I see that it’s very demanding when it comes to a profession, very late hours, working on weekends. But at home I think it’s a question of established roles, people expect women to cook so they cook I don’t think they enjoy it particularly.

Do you use recipe books yourself?

I have a huge collection of recipe books, but I don’t have the patience to run through them. I consult one, and sometimes start with a recipe, but I‘ve never managed to go through with it, it sort of degenerates and I add to it as I go along.

What gave you the idea to begin writing one? How long did it take to complete it?
The actual book took about 8 months. A lot of the recipes were already in my blog and column so a lot of it was already on file. So it was more about compiling it. Pretty much everything I’ve cooked is in the book.

Why so much Old Monk in your recipes?
Because I drink it! I tend to use whatever I’m drinking in my cooking, and I’ve been drinking Old Monk since college.

The Married Man’s Guide To Creative Cooking And Other Dubious Adventures by Samar Halarnkar, Westland, Rs 495.

There’s a Problem in UP When Women are Elected to Panchayats. We Need to Find a Way to Fix It