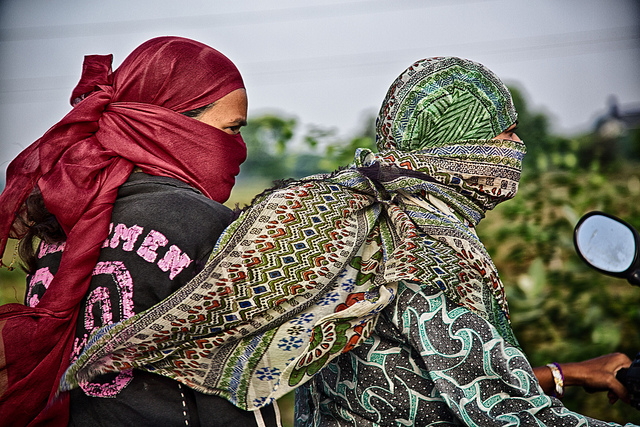 A two-part series on women commuters and their adventures in the capital. Read part 1.

Antra Khurana, 31, is what they call a biker biker – if you own a Bullet, you’ll get it; if not, you don’t deserve to understand it anyway. Growing up in Kanpur, she shifted base to the city to join Delhi University in the mid-2000s and soon after the Miranda House years, began living and working in the city. Antra started off exploring the contours of the city riding a Scooty, but converted to the Bullet cult soon after. Her daily commute – Dwarka-Okhla-Dwarka, which is almost 30km, one way – might have had something to do with it! “I’d never dreamt I’d get a Bullet, because I’m 5’ 3”, you know. I thought I’d get an Avenger. I learnt from a bike instructor, it was a two-day course, and he taught me on a Bullet. He told me that I’ll be buying a Bullet by the end of it and he was right. I went and booked it the very next day.” Antra loves her machine – “I have a silly grin on my face all the time I’m driving it.”

And it seems the city opens up to her in ways uncharacteristic of it, “You know, it’s safer to be on a Bullet in this city, in some ways. It’s better to not have the window, that sheesha of the car you roll down when you need to interact with the city and the people – they also view you in a certain way. Like if I talk to the cops, they talk back nicely.”

Hearing Antra speak almost makes me question my own equation with Delhi: Have I just been doing it wrong? Does it all boil down to how I make my way in this city? “Whenever the cops have stopped me for some reason and because you’re covered, they’re not sure if you’re a guy or a girl, and when they see me, they make fun conversation. Like ‘Arre madam, aap Bullet chalati hain? Kaisa lagta hai? (Oh, you drive a Bullet! How does it feel?)’ I’ve had buses give me right of way on the roundabout. I’ve had people say sorry to me. Sorry! I’ve never heard that word on Delhi’s roads before. Have you?”

Yes I did, once, I reply to her in my head, in the days of yore as Rachel would’ve put it, and it’s still marked as a red-letter day in an old journal somewhere. Antra and I psycho-analyse the shit out of this unheard-of phenomenon together and come to the conclusion that it’s mostly the Bullet, yes. “Even when I was driving a Scooty, I’ve had the usual problems: People deliberately overtaking you from the wrong side, not responding to your horn. I guess because I went from being a Scooty person – which is still your mainstream woman thing and you’re an annoying person on the road with that Scooty sound – to a Bullet person, I feel this a lot. Bullet – just the way it starts, ya, it means business… When I sit alongside my women friends in cars, when they drive, I know that Delhi is not kind at all.”

I stare at him. He stares at me.

He narrows his eyes. Mine are slits already.

And then after this weird foreplay, we take off.

See, I’m in a foul mood, exasperated by the man who’s been trying to overtake me from the left for the last 10 minutes, exhibiting what he’s learnt all his life and imbibed almost via osmosis given the general atmosphere in this city – something about women and keeping them in their place – on the road as well. “Just something we put up with,” is an echo I hear often – and I always replace ‘something’ with ‘more bullshit’ in my head – and then we react depending on the kind of day, week, year, we’ve been having as women in this city.

On really ugly days, it forces us to mirror the machismo right back to its source. Swaati Vivek, 34, dancer-writer, found herself doing the unthinkable in the midst of a stressful day, between grocery-shopping and toddler-caring, “This one uncle was reversing his car (or trying to), with great aplomb in a drunk sideslash-like arc, in the middle of a busy intersection. I should’ve just waited for him to be done, or honked politely after a minute, but I did such a man-thing instead. I kept driving into his arc, sitting on the car’s horn, and gesticulating wildly in the ‘kyaaa?’ fashion that men do on Delhi streets. When he got nervous and drove off, I drove ahead and muttered to myself, ‘Aadmi saala, gaadi nahi chalaani aati… (Silly man, doesn’t even know how to drive!)’” She pauses and adds, “That’s sad. I don’t want to be a man. Especially not this kind of a man.” Ratika Kapur has a straightforward response to how travelling in Delhi has shaped her as a woman, “Aggression has become second nature.”

Delhi as a city is often described in masculine terms – lorded over by the Mughals and then by the Brits, it transitioned into a city that reeked of self-importance. As the nation’s capital and hence at the “centre”, it was never a surprise that its signifiers became distinctly male: If you were thinking of land sharks and middle class families building their middle class dreams and builder floors, you would only imagine Delhi, as did Dibakar Banerjee in his much-eulogised Khosla ka Ghosla, which brilliant as it was, never rose above its indulgent portrayal of patriarchy. How could it, it was a film born in and of Delhi. When I call this city home, friends in Bombay and Bangalore think that automatically implies I’m into intense S n’ M, because really, in a city with such male outdoors (that’s got to be why all the men are so comfortable peeing any-and-everywhere and scratching their balls in public view), how could I? “Even sisterhood is a militant emotion here,” says Swaati succinctly.

There may just be as many Delhis as there are women, as much pleasure-leisure travelling, as the grind of the daily commute. Shabani Hassanwalia, 35, documentary filmmaker, who started driving and discovering herself and the city at 15 (“It was an old Maruti 800, as reliable as my changing hormones”) describes her much-cherished Santro as “my uniform”. She adores the Metro for its perks, “I feel connected to the city, I can see anew, I feel I can listen to more music, I like the fact that I have to stand and not be on my bum the whole time. I like that I get to people watch, I like that I can suddenly change my mind, get off at a station and have aaloo chaat outside it, before hopping right back in.” And this despite “feeling judged in the ladies’ compartment” – she explains, “ I always feel that someone is going to turn around and give me some advice on men, or sex, or how to save, or how to dress, or how I shouldn’t have coloured my hair purple at 26 because look what’s happened to it now.”

As we discuss the politics of humour as endorsed by comedian Samantha Bee and how she’s choosing to respond to the whole why-aren’t-there-more-women-in-late-night-shows-oh-is-it-because-it’s-not-safe-or-are-they-just-not-as-funny-as-the-men discourse, Shabani talks Delhi and image, “It’s only when I travel out of Delhi and spend time in other towns and cities, I realise how intimidating Delhi actually is to many. I look at them with wonder. Really? The city I drive through, sometimes yelling “Jugni” out of my window? Maybe driving in Delhi is what gave me the courage to travel the way I do. I genuinely feel, that no matter where, I’ll always find my way… Also, probably because being hyper alert becomes second nature.”

Delving deeper, it turns out she does have a checklist, even if there are no cycle chains on it, “Like when you leave a party at night, you keep your car keys in your hand so that you don’t spend that extra minute in the dark outside your car searching for them. Your bag is slung across your chest, so that it’s difficult to pull. You take off your earrings the minute you get in; why risk an unnecessary glint? Unlock your phone and put it next to the gear. Lock your doors. Call someone you know on your way home. Check rear view and side view mirrors as you pull out. Drape a scarf over your cleavage… And then, you can play that radio.”

Most times, she doesn’t really think too much about being a woman on the go in Delhi and what that could potentially imply, a bit like Megyn Kelly at Fox News who has talked about being focused on ‘getting to the table and being the best.’

“The city, she loves me” – Shabani often likes to quote Red Hot Chili Peppers and Delhi, it seems, has that distinctive penchant to start coursing through your veins, so much so that we sometimes don’t even notice what we’ve internalised – not even the Iron Man-reminiscent suit-up routine Shabani goes through.

She shrugs. “The only time I notice my gender is when in a crowded parking (like Nehru Place), a man saunters over to my window, jangles his necklace of keys and says ‘Main laga deta hoon. [Let me park it for you].’ I just let him. Life’s too short to find parking in Nehru Place, man or woman.”

Pooja Pande is a writer and editor by profession. You can look her up here – PorterFolio. And send in your hollers here – pooja.pande@gmail.com