HomeNewsNursing Students in Cuttack are Protesting Against ...
May 21, 2016 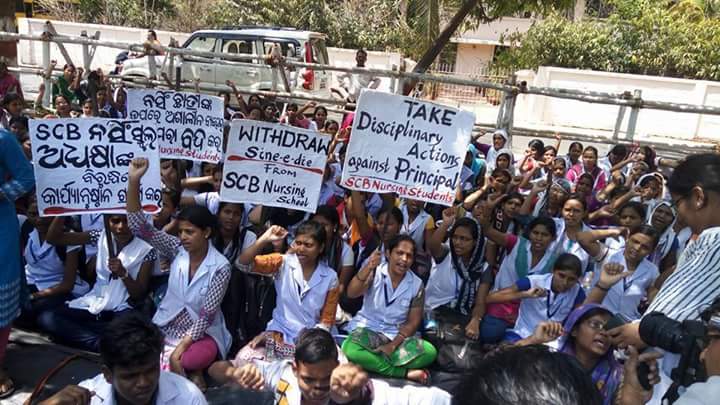 As the students of University of Hyderabad continue their demands to remove Vice Chancellor Appa Rao Podile from his position and arrest him, blaming him for his role in the events that led to Rohith Vemula’s suicide, another college campus in Odisha is filled with unrest against anti-caste prejudice by its administrators. At SCB Medical College in Cuttack, one of the biggest medical colleges in Odisha, around 200 students have gone on strike. They’re demanding the suspension of their principal Kajal Rani Sinha for making casteist remarks, humiliating and physically abusing an Adivasi student. The incident that triggered these protests happened on May 7.

That afternoon, Subhadra Murmu, an Adivasi nursing student in her fourth year at SCB medical college, says she went to inform the warden that she would be late reporting for her duty by five minutes, as lunch had been served late. She didn’t want to be marked absent and have her daily stipend of Rs 50 deducted, as was usually the case when someone was late. She was in her uniform, but she had forgotten to tie her hair in a bun, as nursing students are expected to do. As she approached the warden, the principal Kajal Rani Sinha walked into the room, grabbed Murmu by her hair, scratching her cheek with her nails while doing so, and slapped her twice. She allegedly made abusive remarks, telling her she could sleep with men and do whatever else she wished to do after leaving the college. She pulled her out of the room by her hair, and continued to abuse her. Murmu was told that she could be paying for her meals by doing ‘sex work’. She was told that she and her Adivasi family from Mayurbhanj would remain fools forever, that they were lowly people from lowly castes and would always remain so (though Adivasi is not a caste). Subhadra Murmu talks about her upsetting experience here:

The principal didn’t stop there. She changed Murmu’s assigned duty abruptly. When Murmu approached her the next day, demanding an explanation, she was met with dismissal. Murmu says that the principal has behaved similarly with other students on several occasions. Students were told to approach her for leave only “when their parents were dead”. Students were told to not go out, as they could end up doing something “wrong”. Students were often physically abused. The principal also allegedly commented that girls whose parents were farmers must be “prostituting themselves” to be able to afford nice clothes.

Students like Murmu, who are finishing their course and leave the college in a month, decided to retaliate so that other students wouldn’t have to suffer as they did. Around 50 students met the Hospital Superintendent Prof Pratap Chandra Rath seeking action, who tried to silence them by telling them that nursing was a profession of ‘tolerance and serving others’. The students then went on to file an FIR. The administration responded by closing the nursing school indefinitely, asking the students to vacate their hostels by 7:30am on May 13. This was done to ‘maintain order on campus’. JNUSU has issued a solidarity statement in support of Murmu, while making the following demands: Immediate removal of the principal, end the “sine die” (indefinite suspension) and bring back normalcy in the campus, and end the revocation of hostels facility of all students.

The protest does not have large participation or media attention yet, like other similar university protests we’ve seen this year. The overall culture of prejudice described by Murmu in the video is similar to that in HCU which preceded Rohith Vemula’s suicide. We’ve heard these stories in different voices from many other educational institutes across the country, where students have spoken about pervasive caste prejudice from faculty and fellow students. In HCU as well as SCB, the university administration has been trying to silence the students by sending them out of their hostels.

The strike was suspended after meeting the Health Minister Atanu Sabyasachi Nayak on May 17, who assured the students that a decision would be taken very soon. The students are to meet the Health Minister again on May 24. If no action is taken against Sinha in the next few days, the students will resume their ward duties without pay or hostel stay, and request other teachers to take classes by the roadside as a form of protest.