We are pleased to bring you an excerpt from Aruna Chakravarti’s Daughters of Jorasanko. The sequel to the bestselling novel Jorasanko that explored Rabindranath Tagore’s life in intimate detail, this novel chronicles the lives of women in the Tagore family, their difficult marriages, desires, struggles with debt and illness, and relationships with the poet.

This excerpt focuses on Tagore’s niece Sarala Devi Chaudhrani, the founder of Bharat Stree Mahamandal (one of the earliest women’s organisations that promoted female education in India). 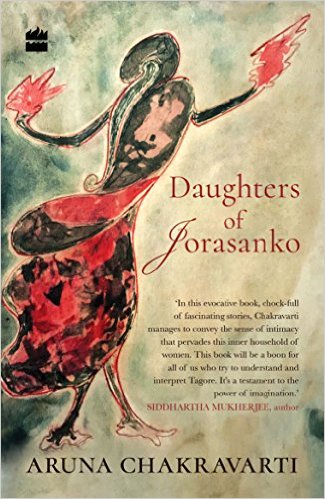 Sarala had been a difficult child, as rebellious as Bibi was docile and as a young woman had insisted on living entirely on her own terms. She had scores of suitors but instead of choosing one and marrying him, she enjoyed playing a cat-and-mouse game and keeping them all in limbo. Suddenly, at the age of nineteen, she declared her intention of going to Mysore as headmistress of Maharani School. Her alarmed parents tried their best to dissuade her, then, failing, begged the Maharshi to intervene. But even the doughty patriarch was forced to bend his will before his granddaughter’s. ‘Go then,’ he gave his consent, masking his defeat in a humorous dig, ‘but only if you’ve taken a resolve to remain unwed all your life. Just say the word and I shall marry you to a sword. It will be your husband and protect you from other men.’ Sarala smiled, but shook her head. She wouldn’t commit to anything. Neither marriage nor spinsterhood.

Sarala left Kolkata in triumph but returned in ignominy. The experience was a disaster and lasted only a couple of months. After a narrow escape from being raped, she fell victim to a pernicious form of malaria and was brought back, to her utter surprise, by her habitually self-absorbed mother.

Sarala returned to Kolkata, sick and dispirited. But the moment she recovered she started looking around for something to do. The days were long and tedious and she needed to fill them with some worthwhile activity. The easiest task at hand was the editorship of the Tagore family journal Bharati which her writer mother, currently in charge, happily relinquished in her daughter’s favour. Sarala took it up with a zest and earnestness typical of her and brought quite a few significant changes not only in the content but in the running of the journal. But she wanted more. Harder work. More serious commitment. And now a fact that had eluded her all these years struck her forcibly. Her country was reeling under a foreign rule and she was doing nothing about it. She was living a useless, frivolous life. Eating, sleeping and playing games with her suitors. Her parents were doing all they could and would have welcomed her involvement. But Sarala wanted no part in the complicated political negotiations the Indian National Congress was carrying on with the British. The process was too slow and ponderous. Too staid and dull. She wanted the thrill and excitement of battle.

Sarala decided to launch a Freedom for India campaign. Her idea was to mobilize the youth of Bengal and motivate them into throwing up all their energies into a new, dynamic movement. It was successful up to a point but eventually ran out of steam. But during its brief run she met some interesting people. One of them was Swami Vivekananda …

Vivekananda, alias Narendranath Datta, was back in India four years after he left it to speak at the Parliament of Religions in Chicago. He had been a wandering sadhu then, poor and obscure, and few of his countrymen including the Tagores had noticed his absence or kept track of what he was doing in the West. Yet he had an association with the Tagore family which went back to his teens. Sarala, who was five years younger, did not know him at the time. But she knew of him. He was her cousin Deependra’s friend and a frequent visitor to Jorasanko. An admirer of her uncle Rabindranath’s work, he often sang his compositions at Brahmo prayer meetings. She also knew that the Brahmo elite of Kolkata had welcomed this brilliant, impetuous youth into their circle and were looking forward to his initiation into their faith when he suddenly turned a somersault. ‘Have you seen God?’ he had the temerity to ask the Maharshi, leaving everyone gaping with shock.

Soon afterwards a strange rumour was set afloat in Kolkata. Naren Datta, eldest son of the eminent lawyer Bishwanath Datta of Shimle, was frequenting the Kali temple of Dakshineswar and hobnobbing with the half-crazed priest Ramakrishna. The incensed and affronted Brahmos declared that they would have nothing to do with him in future. But they couldn’t keep out the reports, half-baked fragments that came to their ears from time to time. Naren had become a rabid Kali worshipper … he had abandoned his family and moved bag and baggage to Dakshineswar … he was calling himself Swami Vivekananda these days …. Ramakrishna’s death had upset Naren so much he had fled from Kolkata and was travelling on foot through various parts of India …. Naren had set his sights on the West and was collecting money for the journey … Swami Vivekananda had spoken of the glories of Hinduism at the conference in Chicago … he was addressing large congregations and exhorting Christians to embrace Hinduism … what he was really doing was wining, dining and womanizing … the self-styled guru had a lot of woman followers.

Sarala heard these rumours and all she felt was a mixture of indifference and contempt. As a Brahmo she couldn’t share Vivekananda’s enthusiasm for Hinduism. It had been a great religion in the past; there was no doubt about that. But it was ridden with inequalities and taboos in its present state which her grandfather had tried  to remove. What, after all, was the Brahmo dharma but Hinduism in its essence? Its cleanest, purest form? How could an educated young man, one who had studied Locke, Hume and Herbert Spencer, reject it in favour of a religion which discouraged enquiry and advocated blind faith? As for his worship of Kali, that was the last straw. Her grandfather had told her that the concept of a destroyer goddess had not been formulated in Vedic India. There was no mention of Kali in the epics. It was much later, centuries after the Ramayana and the Mahabharata had been written, that a scholar prest named Agambagish, charmed by the beauty of an adivasi woman’s naked body, had created a replica and declared it to be one of the hundred and eight manifestations of Durga. The worship of Kali was performed through tantric rites prevalent only in Bengal. In disseminating the cult of Kali, in claiming that an idol made of straw and clay was divine and all powerful, was not Naren Datta endorsing and encouraging primitivism of the worst kind?

But Sarala was to change her mind. That, too, very soon. Belying the expectations of his countrymen, Vivekananda returned to India. And now a new set of rumours came to Sarala’s ears. Public perception, it seemed, had changed dramatically during the sadhu’s absence and he was being covered with the glory of a conuering hero ever since he stepped ashore at Colombo. People were flocking in thousands to see him in Anuradhapur, Kandy and Jaffna. At Pamban, his carriage was drawn not by horses but by humands. He had tried to protest but his voice was drowned by deafening cries of ‘Jai Vivekananda! Jai Swamiji!’ But even more startling was the message he was disseminating wherever he went. At the Shiva temple in Rameswar, he told the congregation that the true worshipper was the one who saw Shiva in the hungry masses. Not he who sat before a stone phallus and chanted mantras.

Sarala was stupefied as was the whole of Bengal. She didn’t know what to make of what she was hearing. Fresh reports were coming in every day. Vivekananda was addressing huge crowds in Madurai, Trichinopoly and Kumbakonam. And his discourses were focusing not on religious but on social issues. ‘Let us put an end to all rituals!’ he had exhorted the gathering in Madras. ‘Let our next fifty years be dedicated to the worship of our great Mother India. The lesser gods can wait for the present. They are sleeping in any case. Our countrymen are our waking gods.’

Strange words coming from a self-proclaimed Kali worshipper! A burning curiosity seized Sarala. She longed to see this man and hear him for herself. 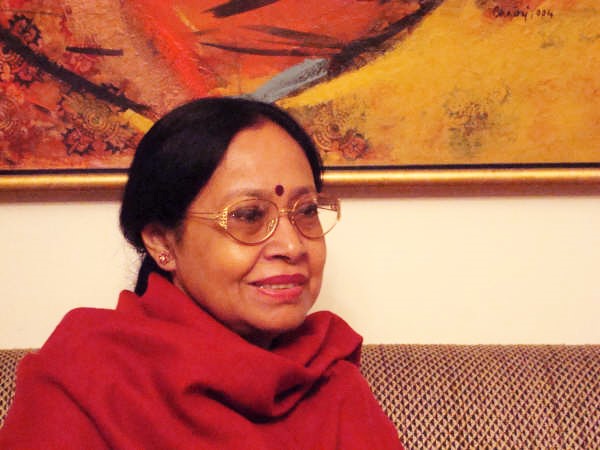 Aruna Chakravarti is a writer, academic, and translator. She has previously written a biography of the Bengali novelist Saratchandra Chattopadhyay and translated an anthology of Rabindranath Tagore’s songs. Her first novel, The Inheritors, was shortlisted for the Commonwealth Writers’ Prize, and her third novel Jorasanko, based on Tagore, was a bestseller. She has received the Sahitya Akademi award, the Vaitalik award and the Sarat Puraskar for her work.