But, argh! Deepika Padukone’s Tamil-Hindi and Tamil-Tamil accents in the movie are fair game for anyone. For someone brought up in Bangalore, shouldn’t she have a better idea of what a Tamil accent is, for Hindi, Tamil and English?

But let’s get off our high horse. That’s no fun. Yesterday I kept a biscuit packet open in the kitchen, nibbling bits of biscuit off it now and then, until my boyfriend saw a lizard doing the same. So I made a grimace of disgust something like this: 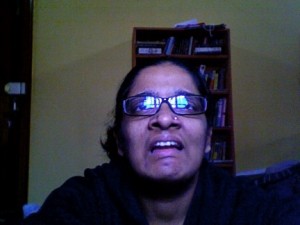 Harry Potter, in Goblet of Fire, exchanges words with Lucius Malfoy about his mother, like so:

You know your mother, Malfoy? […] that expression she’s got, like she’s got dung under her nose? Has she always looked like that, or was it just because you were with her?

Narcissa Malfoy being somewhat posh, has a rather more subtle disgust on her face: 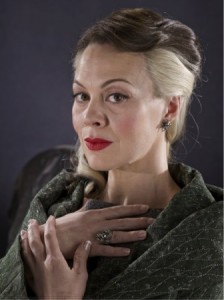 In fact, it’s only visible if you look at the ravines connecting her nostrils and the corners of her mouth.

See, I can picture Padukone’s accent coach finally throwing her hands up in despair and saying, “Okay, don’t worry about the accent, I’ll show you a shortcut to the Tamil accent. Just make this grimace.”

And so we have Meenamma making these grimaces in the movie, all while delivering non-disgust lines: 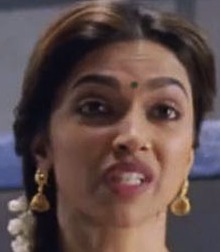 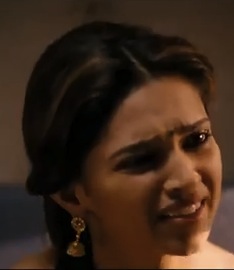 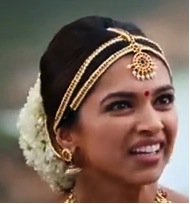 Note the ravines between the nostrils and the corners of the mouth. Ladies and gentlemen, I give you the secret to the Tamil accent! Apparently Tamilians were so disgusted with the likes of Padukone, that when she had to research her accent with them they spoke with their faces set in a rictus like this.

Sneha Rajaram divides her time between her living room and bedroom. She likes to eat Maggi noodles (atta) and read fantasy and sci-fi, chicklit and speculative fiction (whatever that is).