HomeLifeAn Ode to Drunk Girls I Meet in the Loos of Pubs
July 4, 2018

I have a hazy memory of standing in the restroom and weeping quietly after downing a little too much of the good old monk at Koshy’s. A woman with thick, black, long hair was washing her hands by the sink. She looked at me in the mirror and asked me what the matter was. She didn’t wait for my reply. She said “Whatever it is, it’ll be fine. Don’t worry. Nothing’s permanent,” and then just like that, we hugged and I felt a lot better.

This is the kind of advice that anybody will give you; anybody who cares for you and sees you crying, that is. What is it about these strangers we run into in the loos though? Why do they care?

When I was 17, a boy tried to convince me that two girls could never be best friends. I was more hurt than angry because for a long time after that, I believed it was true. All around me were boy gangs. In corridors, dhabas, coffee shops, queues at the movie theatre, and classrooms. The boy gangs came in various shapes and sizes and they were all menacingly loud and perpetually laughing. Where were the women? I asked myself.

I wish I’d known then to look in the loos.

I have a confession to make. I hate, just hate to admit this. There have been times when I’ve sat with the boys and judged girls who took too long to come back from loos. It made me proud when the boys said that I’m not like other girls. I wish I’d known then the story behind the loo thing. Maybe then I’d never have wanted to come out of loos.

Solidarity is written and rewritten in these loos. A lot has been said about the drunken women we meet in loos. And sometimes I wonder how they’re all doing. 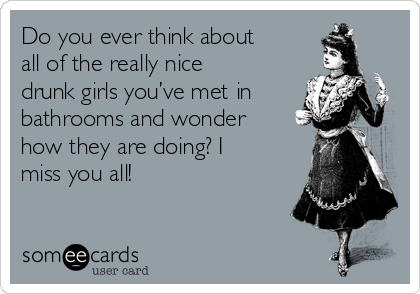 Every time I’ve been ridiculously drunk, I’ve met a really friendly woman in the loo and we exchange our kashta-sukha for what seems to be a long time before getting back to our forlorn little lives. The next morning, friends will tell me that the long time spent in the loo wasn’t all that long.

I think that in these loos, we meet ripped-up versions of ourselves that we have sewn together haphazardly and left behind in our lives. Maybe this is why I have always found it easier to confide in strange women I meet in loos. In essence, we are meeting our own crying selves and that’s why I believe truly and completely when they say “I understand what you mean” or even “It’ll get better. I promise.”

S tells me that at the loo in Wyt once, a woman offered her the best career advice. “The only way to ensure that you get a job after graduation is by creating a LinkedIn profile and then bugging people to give you a job.”

S took this advice a little too seriously and prematurely. One week later, after deciding to take a break from studying for their JNU entrance, she and Z went to Plan B, where they ran into a woman who said she used to teach at JNU. S and Z refused to let her pee until she agreed to give them 2 seats. “You have to, just have to give us seats,” they said over and over again until the woman smiled at them first and then ran away.

IA once met a woman at the loo in Plan B, huddled up on the sink and weeping. When IA asked her if she was alright, the woman said “no”, and then after a long pause, said, “these boys ya”, and IA agreed with her. Boys, they said and without a word after that, they exchanged their histories with boys in complete silence.

An encouraging, if perishable jaane-do-ness binds these women in which they are absolutely at ease to dangle any kind of information at strange women’s unjudging faces.

I have myself never found a chance to hug crying women in loos. They are usually always surrounded by two or three girls and one or two bonus strangers. The first friend is brushing hair away from the teary girl’s eyes, the second friend is rubbing her back and the third is standing with her arms across her chest, but still full of concern, saying, “listen you just need to get over this.”

Either after consoling or crying, the women who come back from the loos aren’t the same as when they went in. In some cases, they bring back whatever it is that they find in the loos to the tables they are at.

A tells me that once; she let a woman use the loo before her, even though A had been waiting longer. When this woman came out of the loo, she hugged A, and said “the flush doesn’t work” and then left. A came back looking flustered and happy. That evening, two more women accosted me on the way to the loo to tell me the flush didn’t work. When I went and tried anyway, the flush was working fine. Clearly all the women were drunk, yet somehow more concerned about other women using the toilet.

I have known TA only as my goody-goody colleague. And then we went drinking one day with two other colleagues. We were all sitting at our table, staring into our drinks wondering where the excitement to suddenly rush to a pub on a Wednesday afternoon came from and where it suddenly disappeared.

The music was loud and distracting. It was a comfort because at the table, we were all awkward and quiet. We could practically hear each other’s thoughts. And then out of nowhere, Miss TA lands her fist on the table with a bang and says, “What did you think of me when you first met me?” It sounded more like a declaration but we all burst out laughing and thanked her for breaking the ice. Needless to say, we spent the whole evening talking and gossiping.

In Humming Tree once, I was drinking with a woman I was mildly attracted to. But too much had happened and neither of us actually liked each other. But that day, we were vulnerable with each other in a way that only women who aren’t fond of each other but are stuck together for some reason can be. The drinking definitely does it but it’s also this strange warmth that makes us stretch ourselves open, like a big yawn, and pull this other person into our stories.

We don’t talk anymore, but I’m thankful for this memory. It’s a reminder of my vulnerability that I have grown to tolerate and now, like.

This is a story that supposedly didn’t actually happen but I’m sure it is true. A woman once lost a wallet at Chin Lung’s and when the waiters made a fuss, four women who were scattered across various tables suddenly got together and pitched in money for her — clearing not only the bill but also a cab back home.

Chin Lung’s has the best sorority stories that now and then include men as well. I heard from a friend that a group of young women had been drinking there all day and had passed out at their table. The waiters took turns to stand around them and made sure none of the boys hanging out on other tables bothered them. And when they woke, the women were given lime juice and put in a cab. This did happen.

I wonder sometimes what men do if they run into another man crying in the loo. Will they say “nam appandu yen gantu hogatte avanu attre? (what goes of my father’s knot if he is crying)” and go away?

I ask AM what happens. He rolls his eyes and says, “We just avoid each other. Usually I’m in a hurry to get out of there.” I cheer up a little when I hear this because I want to believe that this little soiree exists only in women’s loos.

I am convinced that women meet their actual soul mates in loos. And these are soul mates that are better than the ones we have in our lives. If I was still in touch with all the boys I went to college with today, I’d tell them that I’m just like any other girl and that’s the most comforting thing I’ve discovered about myself. And also that women can be best friends with women they’ve met for 2 seconds in the loo and sometimes, that’s more than enough.