HomeKrantiEight More Reasons To Love Aditi Mittal (As If You ...
February 18, 2014 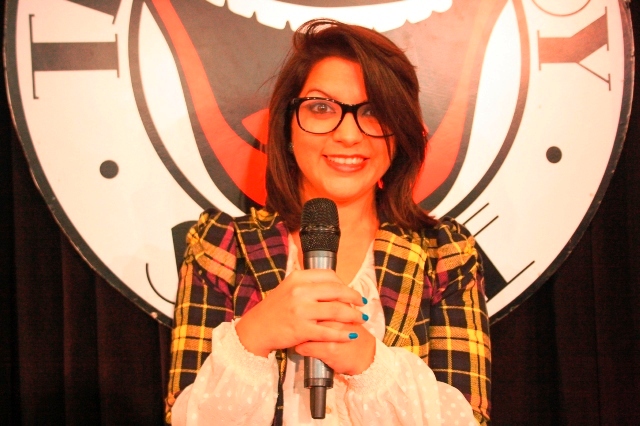 Aditi Mittal, comedian and feminist, wrote a kickass speech about what it was like to work as a stand-up comic and about being one of the few girls on the block. Here are eight of the most funny and amazeballs things she said:

1. “I was asked to choose what I identified with more, being a woman, or being a stand-up comedian. Being asked to choose implies that if I am one I cannot be the other. I’d like to borrow a quote from a report released by the detachable-genital department of Johns Hopkins University, when I say ‘You can’t’.”

2. “I’d start my jokes on vaginal tightening cream by saying ‘I’m not a pervert or anything,’ when in reality I am a huge pervert. Today, I am done justifying myself.”

3. “[Journo asks] ‘So you’re a funny woman, they’re either considered crazy or sluts. Which one are you?’ I said ‘Both’.”

4. “I remember listening to an ad for a show I did in Delhi. In it, they described me as a fiery feminist. Coz apparently feminists who keep their cool don’t exist.”

5. “I was not aware, when I started out, that a woman doing comedy was supposed to be as rare as a monkey being able to quote Shakespeare.”

6. “I’ve said no to several interviews when they begin their story with ‘Well, you know, with all the horrible stories about women coming out of India today, yours will be a positive one.’ It horrifies me that the fact that I’ve not been left dead in a ditch with my head chopped off in spite of speaking my mind, is a reason to celebrate.”

7. “‘You’re only getting this much work because you’re a woman,’ others have stated. Again, not because I’m funny, but because I am a woman. In the past I’ve spent so much time crying in the St. Andrews auditorium’s ladies bathroom, that now, even when I go there to pee, tears spring to my eyes.”

8. “‘Beta lovely comedy, but…do your parents know that you are saying all these things on stage? Accha ladka kaise milega?’ His concern for my love life was heart-warming.”