As the last day of the Times Litfest Bengaluru 2017, presented by ACT Fibrenet, wound to a successful end, a seven member panel were on stage, the members of which resembled a rainbow. They were Samhita Arni, the writer of the bestselling graphic novel, Sita’s Ramayana and The Missing Queen, Krishna Udayasankar, the writer of The Aryavarta Chronicles, Sharanya Manivannan, a poet and the author of The High Priestess Never Matters, Paromita Vohra, the founder of Agents of Ishq and a documentary filmmaker, Shvetha Jaishankar, a former model and the author of Gorgeous: Eat Well, Look Great and Jahnavi Barua, the author of the critically acclaimed Next Door and Rebirth. The panel was moderated by Nisha Susan, a writer and journalist, and the founder of The Ladies Finger. Together, they gave us an idea of a ‘Feminist Justice League’.

After wild applause and lots of hooting, the session began with Nisha Susan pointing out at one of the signs that had been put up a little away from the venue. “There’s this board over there that rather sweetly, optimistically and wistfully says ‘Well-Behaved Women Seldom Make History’. There’s no signs of good behaviour on this panel, so we must all be leaning towards making history right now,” she joked.

She then asked Paromita about her landline. (Yes, do you remember those?) Paromita spoke about when she got a telephone from a scheme called OYT (Own Your Telephone) back when it wasn’t so easy to have your very own phone. “As everyone knows, a telephone is a source of work and love both, and to call your parents,” she said. She explained that now nobody calls her on the landline, except sales calls, and every sales call would begin by asking, “Hello, can I speak to Mr Vohra?”.

In the beginning she used to just say, “There is no Mr Vohra here”. But then, if it was a saleswoman she would say, “Do you think a woman cannot own a telephone? Should you be thinking that way about women?” Explaining that public life of any kind teaches a woman to have a sense of humour, she said that now when people call her asking for “Mr Vohra” she laments in the most dramatic voice possible, “Mein kya batao aapko? Mr Vohra toh mujhe chhor ke chalegaye hai! [What can I say? Mr Vohra has left me and run away!]”

"Spam callers always assume that I am a Mr Vohra when they call me on my telephone." -@parodevi #ACTTimesLitfest

Sharanya Manivannan then spoke about how early her career in writing started. “I am very grateful that I had that drive at that time. And I would encourage people now, to go ahead and try putting their writing out there. She continued to speak about public life and fashion choices. “When I was in living in Chennai, I had to dress a certain way in order to be ignored,” she said. “On the other hand, whenever I get to be on stage like this where I can wear what I like, I don’t pick my go-to sarees.” 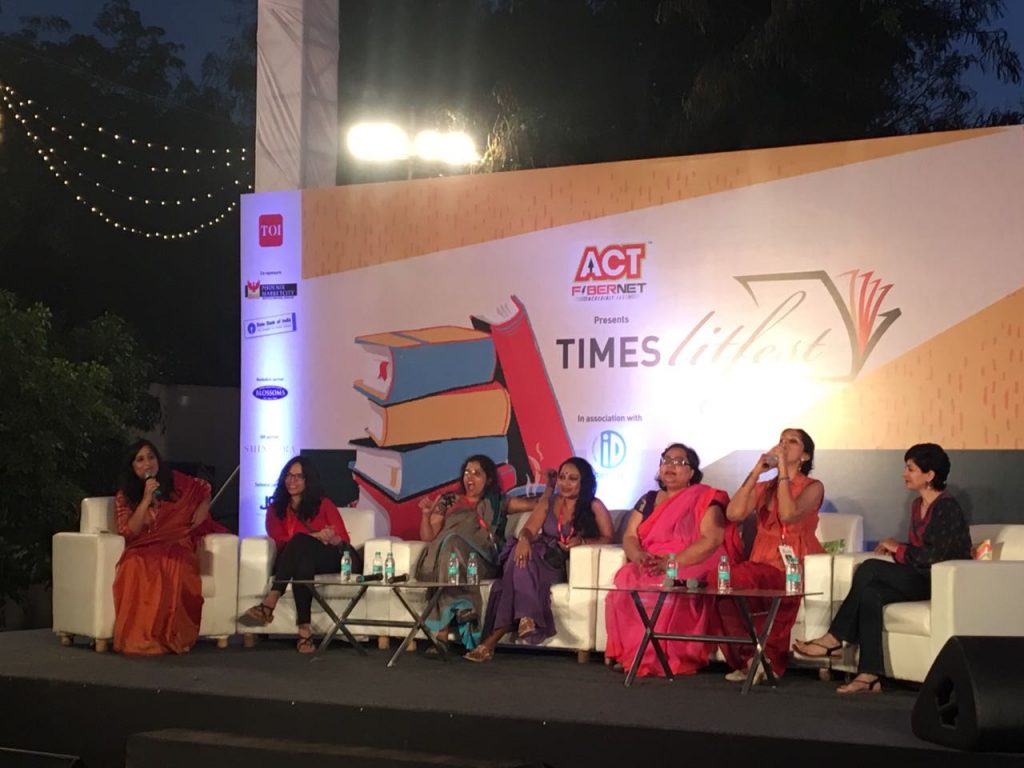 Jahnvi Barua spoke about when she published her second book, a novel, about a woman going through the hazards of married life. “My editor, in all enthusiasm, went and wrote on the back of the book ‘Jahnvi Barua writes with characteristic honesty’.” She explained how everyone then thought that her husband used to beat her, and would ask her about it. So later she began opening discussions by explaining, “This is a work of fiction, my husband is sitting right over there.”

"When I wrote a novel about domestic abuse, people came upto me, said, sorry this happened to you." -Jahnavi Barua #ACTTimesLitfest

Samhita Arni told us about when her first book was published at the age of 11, people would come up to her and ask if her mother actually wrote the book. “I think it was really hard for me at 11,” she said. “I wasn’t used to that kind of attention, and I was getting interviewed a lot, and I went on my first book tour alone when I was 15 to Switzerland. It was nerve-racking.” She narrated how strange it was to go and talk in schools to kids who were approximately the same age as her. “I felt ‘What right do I have to say anything to these people?’ I am almost the same age. And really, everyone has a book inside of them. I am, on a fundamental level, quite an ordinary person.”

"I did my first book tour when I was 15, to Switzerland. It was nerve-racking." -@samarni #ACTTimesLitfest

Shvetha Jaishankar spoke about how most people think her book about what models eat would be the world’s shortest book. “And 176 pages later, several recipes and conversations with models and actors, I still get the same question. People still that, ‘Yeah, must just be eating carrot sticks to look like this!’”

“People tell me I walk for a living,” Shvetha said, talking about people’s reactions to her career as a model, and they don’t think it is a hard job to do. “But I think that it is walking down the ramp, but there are nuances behind any profession. It’s not easy to travel the world, do shows, try to represent a designer. They are the language of the designer.”

"All my life I have been beating clichés. My diet as a model, my choosing MBA over acting after modeling." -@ShvethaJ #ACTTimesLitfest

Speaking about when she went to do her MBA, people asked if she did her GMAT and got in, as if there could be a “model quota” to get into Indian School of Business. Shvetha went on to speak about the gender biases she has experienced in public life, with the ways people reacted to her bad first marriage. And a lot of strangers would come up to her and say that it broke down because she didn’t have a child with him.

"Strangers walked upto me and said my first marriage fell apart because we didnt have a child." -@ShvethaJ #ACTTimesLitfest

“It seems like there is still a public pressure for women to have children,” Nisha said, in response to Shvetha’s story.

To which Krishna Udayasankar added that once she became a writer, a lot of people stopped asking about when she will have a children. “I seem to be doing something productive with my life, so there is more to me than just my ovaries. Or, ‘She’s weird, so let’s not hope for children from her anyway’”.  She cheekily added, that sometimes you deal with the stranger’s advice saying, “What to do? My husband just can’t do it.”

The panel came to an end with an audience member asking, “Feminism as a word is about gender equality, you are fighting for the same opportunities. But somewhere it has moved into man-hating. Do people realise how detrimental that is to the movement itself?”

“I don’t know if you feel like feminism is about man-hating,” Nisha responded. Explaining why feminism isn’t always about speaking about the good men do she said, “It’s because we spend a lot of time thinking about other things like weightlifting, Afghanistan, caste and reading really boring policy documents because men have written them and we have to figure out whether they have screwed us. That’s what we do. Man-hating? That would be a very exciting job.”

"Feminism is about liberation, relooking at Gender and redefining what it is to be a man or a woman." -@parodevi #ACTTimesLitfest

Paromita answered the question splendidly, by saying, “I do not think of feminism as a gender equality movement. Because it becomes a very flat way to understand what feminism also does. It really is a movement of liberation. Liberating ourselves from what gender forces us to be.”