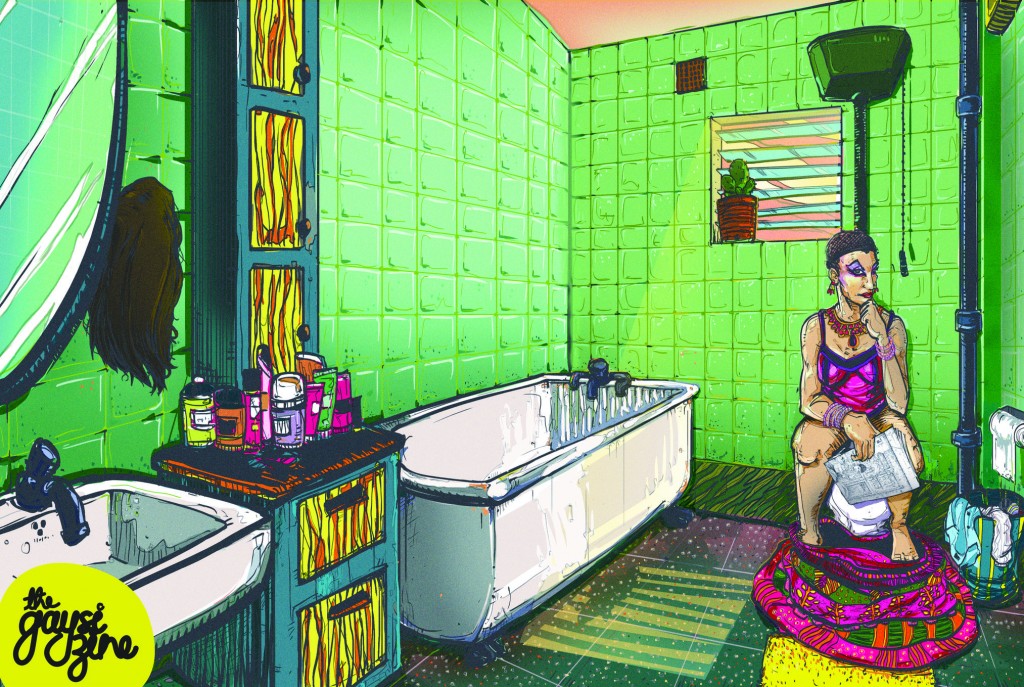 The spectacular cover of this year’s edition of the Gaysi magazine shows an androgynous figure – what seems to be a man in drag, with large breasts under a pink camisole top – sitting on a toilet, pants down, book in hand, looking at the viewer with a defensively raised eyebrow, as if to say: “You’re the one looking at me while I’m on the toilet.”

Gaysi, short for Gay Desi, is a Mumbai based online collective that also produces queer graphic anthologies. This edition’s cover promises eye-meltingly beautiful graphics, which the anthology delivers in spades (the story of Sudyumna and Ila deserves special mention). It also promises a peek into the queer inner life and its defences against the world – but this peek is provided through a disingenuous lens. Whoever drew the cover knew exactly what the anthology was about, and they put the all the themes of the anthology into the toilet-sitter’s perfectly threaded, raised eyebrow.

These are some of the stories in this anthology: we read about a woman who wants to desocialize herself and be alone; a woman who goes to the goddess Kamakhya’s temple in Assam “because Kamakhya would’ve been my kind of woman”; a woman who constantly thinks of a loved one as she starts a lonely new life in a new city; a woman who secretly texts her girlfriend while her obnoxious husband abuses her; a gay man who gets a ‘straight’ man into bed; a woman who comes into her own as a lesbian; a tutorial that tells us what to say to straight men who ask us questions about being lesbian; and a simple story of a woman who finds someone, just like that, on a hopeful evening.

Many of the stories focus on the individual queer person’s experience of navigating through a world that is predatory, that can’t be identified with, that is alienating in its indifference. Anyone who is different, exploited, marginalised, struggling, and who decides to forge their story into an identity, can see themselves in these narratives – a fact that is acknowledged through some of the book’s stories that aren’t explicitly queer. And this is how the book succeeds.

But this is also how the book fails.

It fails to tell us what comes next, what comes after the trauma, the frustration, the formation of identity, apart from romance. The exceptions are a handful of brilliant stories (the abovementioned story of Sudyumna, for instance, and a one-page comic strip that perfectly demonstrates the hypocrisy in straight men’s homophobia) that are inextricably embedded in a larger world, that bridge the gap between the queer individual and a hetero-normative society (the ‘straight’ man who is unwittingly seduced comes to mind). Because, after we’ve been through the journey of rebellion and feel secure as individuals, it’s possible that we will have to turn back and reach out to participate in the same predatory society and people some day – the same whale that swallowed us. Fight it, mock it, fuck it, stubbornly inhabit it.

This isn’t the only picture that remains largely undrawn. What about the one of the individual queer among her queer peers, in a non-romantic, not-so-sexual, non-activist context? This is the most important one to put out there for isolated queer readers to see: a world in which you have LGBTQIA friends is possible. A queer culture, in fact – which is something that already exists all over the world, whether subterranean or above ground. The Gaysi Family’s name says, “Here’s a queer community,” and yet their book, meant for that very community, tells individuals’ stories without connecting the social dots that Gaysi itself has successfully connected in real life. There’s a piece missing from the jigsaw puzzle here.

Long ago a friend once told me about the time he visited a gay bar in Paris. He asked a French man there what being gay in France was like. The answer was, “It’s wonderful!” A list of communities, events, celebrations, support groups, etc. followed. The man then asked my friend what it was like in India. My friend told him about Section 377. The man’s undiluted horror and pity began to get on my friend’s nerves. So he told the man, “I’m happy. Are you happy?” I’m told the Frenchman had no answer.

I’m not suggesting that we turn into the frighteningly well-adjusted characters from the recently released video song ‘Hum Hain Happy’. But Gaysi is at the other end of this wide spectrum of the individual’s relationship to the socio-political, and it’s a spectrum that is full of unexplored possibilities. There is too much amorphous victimhood here, too much fear that hasn’t turned into anger, too much of a retreat into the privacy of the queer person’s bedroom (or in this edition’s case, bathroom). Yes, retreat into yourself as a masturbatory exercise once in a while. But we all know that masturbation, like life, comes to an end. We all know that the bedroom is never truly private – doesn’t the long arm of 377 reach into the bedroom? – and that there is no true refuge except in the messiness of the world itself.

There’s plenty of moving room here – find your own way. But let’s not become a gay Parisian’s idea of what being queer in India is like.