Did you know that the number of trees in Bangalore have increased since the 1800s?

Or that we’ve lost over 40 lakes in Bangalore in the past century?

Researcher Harini Nagendra’s new book, Nature in the City: Bengaluru in the Past, Present, and Future, maps out Bangalore and the city’s relationship with nature in a way that hasn’t been done ever before – our conversations on sustainability and nature have always been more abstract ones, talking about forests that need to be conserved, or glaciers that are melting, but hardly about the cities we live in.

Nagendra, who is a Professor of Sustainability at Azim Premji University, Bangalore, has worked on issues of sustainability in forests and cities in India. She has previously worked at Indiana University with Elinor Ostrom, who had won the Nobel Prize in Economics in 2009, for her work on collective action by local communities to protect ecological commons. Nagendra has worked on several books, including Reforesting Landscapes: Linking Pattern and Process (co-edited, 2010), and says she also likes to keep writing about these issues in newspapers, in a way that makes it much more accessible to people, rather than simply as academic writing. 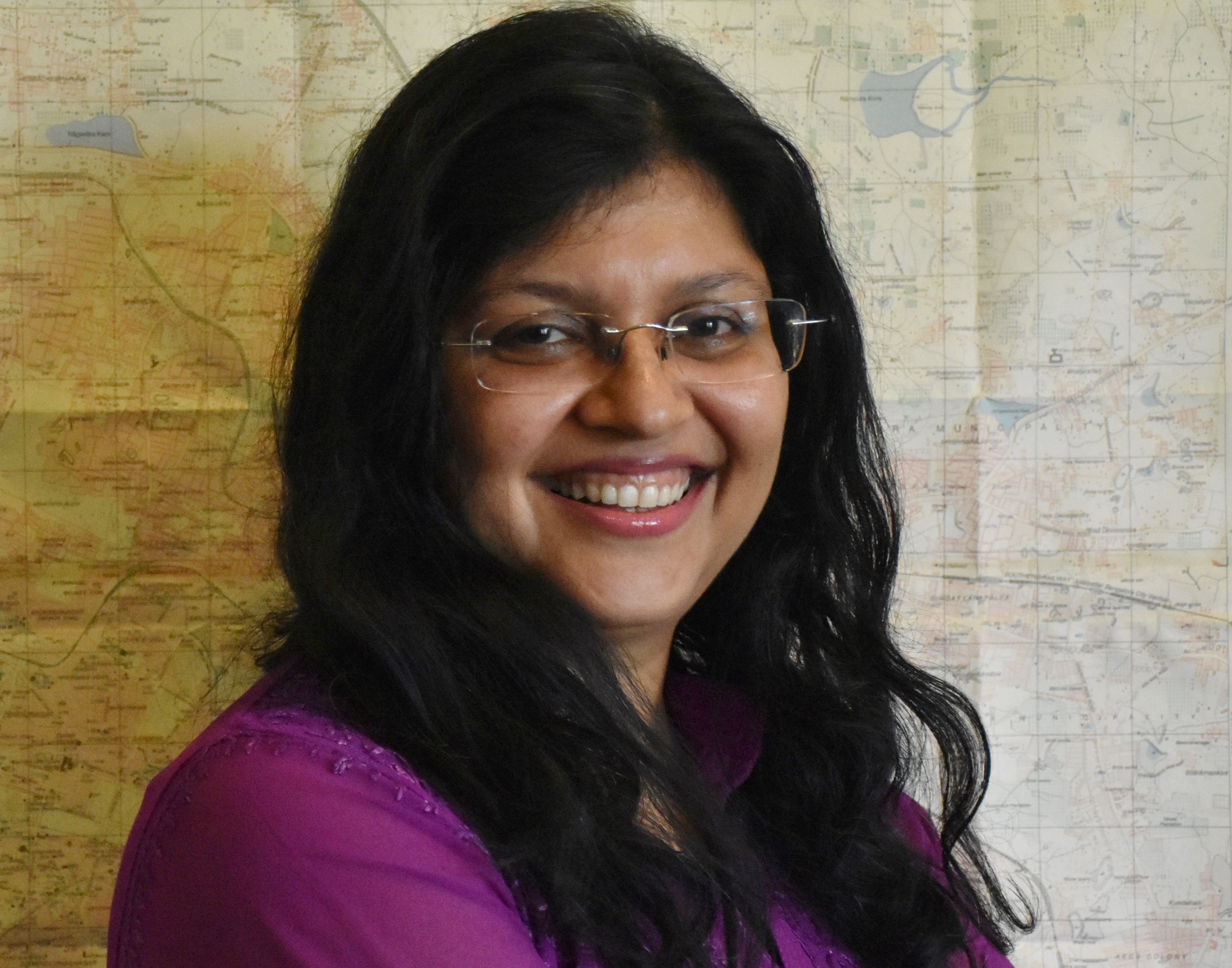 Nature in the City begins unexpectedly with a poem by Paramanand on the life of Shahji (father of Shivaji) about Bangalore in the early 17th century that describes a city full of houses with wells, deep lakes, countless pigeons, and trees full of flowers and fruit. The book is divided into various sections on nature and personal spaces that looks at home gardens in Bangalore, nature and poverty where Nagendra documents the vegetation in slums, and nature on roads and the kind of trees in Bangalore. Nagendra insists that our understanding of the city itself changes when we begin to look at nature and its conservation within a city space.

We caught up with Nagendra to talk to her about her fascinating work.

What prompted you to work on this book?

I’m from Bangalore, and the book began with my research on the city. I’ve been working in this area for a long time now; in 1993, my focus of research was on forests across South Asia, and then at some point I realised that I had never done any research in my own city. I had moved out of Bangalore, and when I moved back a few years later, a lot had changed. I moved in to a new house, and began to look for nurseries from where I could get plants for a garden at home, but suddenly, the traditional plants that I’d been so used to seeing, like mallige (jasmine), small gooseberry, curry leaf, and sapota (chikoo) when I was a child had been replaced by plants that people grow in more manicured gardens, like palm or variegated plants that were ornamental rather than medicinal. When my daughter was born, I also started thinking about the quality of life that would be later left to her. All of this, and working on an action-oriented restoration of lakes, made me realise that we really don’t have any ecological data on the city. Once I began working on this, I also had to find a way of making it more accessible to the public; I didn’t want it only to be a research paper that a few people would read. So I decided to make it a book.

A lot of the conversations on ecological conservation are always about places like forests, but nobody seems to pay specific attention to nature and within cities, around which and along with which they both grow. What pushed you to look at a city?

I used to work on forest conservation in various parts of South Asia, and a lot of the work was often policy relevant work. At some point you would leave after working there, and so the kind of change that is possible is much less when you don’t actually live there. We need to start looking at cities as centres of conservation. Just the fact that you have leopards coming in to cities should be enough indication that something is wrong – this question of how to involve cities in this process of conservation is an important one, especially when cities are growing at the current rate. You have to also think about conservation where you are.

This also then affects the way we see and understand development?

Of course. Our idea of development is very lopsided. We’re constantly thinking of roads, of how to increase infrastructure, and of building smart cities. But the question of who this development is for needs to be paid attention to as well. Poorer people depend very much on firewood, on water, on nature — it increases their capacity to survive in the city. The BBMP, for instance, says that they will not plant trees on the sides of roads, because a few years down the line, the trees will have to be cut to widen the roads and deal with the increasing number of vehicles. But you need the trees for shade, to reduce air pollution. There are vendors on the sides of the roads, who the trees would help, there are poorer people who travel by buses and use and work on the roads. But your development model and planning is for people in cars with rolled up windows and air conditioners.

So the question of conservation also becomes about existing social structures?

It does. Conservation always happens because of people. Nobody would look at slums as centres for conservation, for instance, but just sit down and talk to people from there. It’s the poor who use and protect nature the most. A lot of people with home gardens who we spoke to would all talk about how they had to cut back on water, or needed more space, and so their gardens had shrunk. But in slums, where space challenges are much more severe, a lot of thought still does go into plants. There would be plants in battery cans, in sacks, in plastic cans. Their level of knowledge of ecology is much more – they know which greens to grow that they can eat, and which plants are medicinal. Where people end up living, in which parts of the city and with what kind of surroundings and environmental conditions is also a reinforcement of existing social structures.

Could you tell us a little bit about the process of research?

When I first started, this was a side interest. The idea was to work with undergraduate students. We started interacting with students from Mount Carmel College, and St Joseph’s College, and they seemed so keen on helping with the research. We used satellite remote sensing to track and see the kind of changes that the city has undergone. Then we also did field work – we would go and talk to people who lived in slums or in random plots of land with small back gardens. For instance, we spoke to bamboo weavers on KR Road, and looked at how their work had been affected by the loss of tree cover. There are also vendors who choose to sit under specific trees because of what they sell (there is a section in the book on how Vasantha, who sells flowers in BTM layout, chose to sell her flowers under the Tabebuia tree because it stopped her flowers from wilting, and how Prem, who sells clothes in Kadugonahalli, sits under an African tulip tree, because the shade protects the clothes he is selling from fading). A lot of it was also just informal conversations with people, or surveys, and looking at maps from archives.

Were you surprised by anything during your research?

I was a little surprised at how people we spoke to were so generous and giving of their time. For instance, we were trying to look at insects in the city, and to do that, we had to set up this really suspicious looking instrument in people’s back gardens at night. 8 out of 10 people allowed us in. They were curious themselves, asked us a lot of questions, and would wake up at 5 am to see what insects they found in the instrument. I’ve come to realise that this is a characteristic of this city, that people want to share their stories – I used to get phone calls from people who just wanted to tell me about something new they had planted in their garden. We heard about this pastor who mapped out trees. Then he would ask children to map trees to their species, and give everyone a sapling to go and plant somewhere once they’d done this.

How do you keep track of something like this? Especially since cities are constantly in a state of flux, and drawing and redrawing their own boundaries?

Nobody’s asked me that before, actually. It looks like there are two cities, socially and ecologically. I’m not certain of the answer, but there’s a need to figure out, or at least question how to reconcile the fact that in peripheral areas, we have people living in slums, when right next to it we have apartments that people spend crores on. Here people want to build parks, and then in the slums it’s a different story. How do you begin conservation in such a situation?