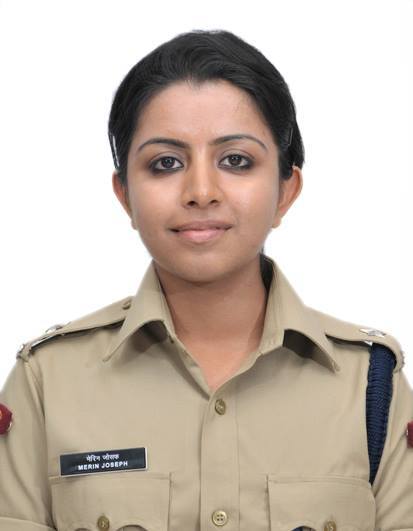 Vomiting at every sexist reference to Merin Joseph in the media would probably kill us. The female IPS officer, who was appointed Assistant Superintendent of Police under training in Ernakulam Rural district in 2014, has been objectified by the media for her good looks. It began when she was still an IPS officer in training. The BA Hons graduate was one of the youngest in her batch of officers and had been quite awesome in passing at first attempt. But none of that mattered after a photograph of her in uniform began making the rounds identifying her falsely as Kochi’s hot new Assistant Commissioner of Police. But don’t vomit yet – this is just the beginning. Her photos went viral on the Internet, men said they wanted to be arrested by her, and Travancore Tales, a news outlet, even put her wedding video up on YouTube (hopefully with her permission). She’s endured all of it with the bravery and stoicism one would expect from a police officer, even deciding to use the publicity to promote causes that interest her, like gaining the public’s confidence in the police force, and encouraging young girls to think of a career as policewomen.

But the urge to purge recently became uncontrollable.

The Hindu, who called her “a Malayali girl” last year (#notagirl #notagirl #notagirl!), is now clearly relishing its wordplay in a new piece on her three days ago. The piece is headlined – keep your anti-emetics on standby – “Pretty Tough Cop”.

“Pretty tough cop” now calls Joseph “the dashing young IPS officer who took social media by storm”. I suppose we should be grateful for “dashing”, the first and last veneer of gender neutrality. Because after that we’re heading for just plain lecherous. We are told, “Merin doesn’t seem like the archetypal IPS officer; she is petite with rather soft hands.”

Why do we need to know she’s petite? Why? Why? Something tells me this isn’t a kindly attempt to encourage other small-built women who want to become police officers.

And soft hands? Really? How would you know? Did you palpate and press them?

Plus, we are told she is “Dressed in uniform, her hair tied back”. We needn’t tell you what “hair tied back” means. You can figure it out for yourself.

And most of all, why is the male gaze so strong in this piece, if it was written by a woman? Someone please answer this happily sexist question.

We recommend ginger in lemon water.

2 Responses to “No, We Don’t Want to Know What You Think of IPS Officer Merin Joseph’s Hands”