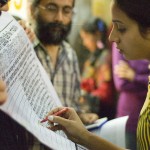 Two weeks ago, Finance Minister P Chidambaram announced that an additional Rs 1,000 crore was being sanctioned for the Rs 1,000 crore fund set up in memory of Nirbhaya, which has lain dormant for a year.

How is this money being used? Revati Laul took a look at the various proposals to use the Ministry of Finance’s fund, which currently revolve around two aspects: a) setting up control rooms to handle and track calls from women in distress, so a police vehicle can be dispatched to the spot immediately, and b) installing CCTVs and GPS on public transport systems.

Our understaffed, ill-equipped police force and the lack of sensitization about violence against women are simply some of the things overlooked by these poorly thought out proposals with their sights trained on surveillance.

Do you have ideas on how the money can be put to better use?

The Ministry of Finance has an appeal: “Suggestions and proposals for the Nirbhaya fund from all concerned citizens, NGOs and civil rights groups are welcome and can be emailed to Joint Secretary, Budget, Ministry of Finance, Rajat Bhargava (rajat.bhargava@nic.in).”