HomeVaanthiHow Twitter Users in India and Pakistan are Treati ...
October 13, 2016

Ever since India retaliated to the attack on the army base at Uri with surgical strikes, there have been a flood of jingoistic tweets by Twitter users from India and Pakistan, pouring out their heart-felt opinions about the other country. But not all these tweets are about random things that your eyes glaze over — they are tweets, all by male users, about women.

These tweets usually fall into two categories: in the first, men from India casually talk about raping or ‘conquering’ women from the other country, and in the other men in Pakistan take it upon themselves to describe India as a country that wants war, but can’t even take care of its women. 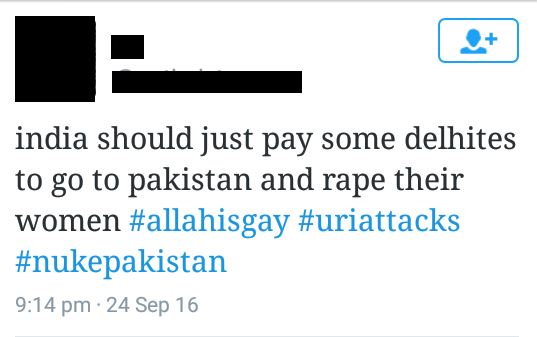 This man, for instance, has tweeted, “india should just pay some delhites to go to pakistan and rape their women #allahisgay #uriattacks #nukepakistan”. This isn’t his only tweet. Amidst a very proud declaration about being the first Indian to complete Pokedex in the UK, he also has a series of tweets that not only encourage war with Pakistan, but also say, “countries should join hands to rape all pakistani women and kill their terrorist children. but wait they are ugly as fuck #nukepakistan”.

These tweets are incredibly violent and disturbing and it’s worrying that they seem like an automatic response — I remember another, in which a man tweeted that the only things worth conquering from Pakistan were Pakistani women and Coke Studio.

In another case, a man who tweeted that Indian’s should “count your days” because the country will be nuked by the Pakistan army, received a response from an Indian woman who said she was scared by this. The man responded with this amazing tweet, “You don’t have to be. There is a beauty filter in our nuke missiles. It’ll not damage the beautiful things in India.” 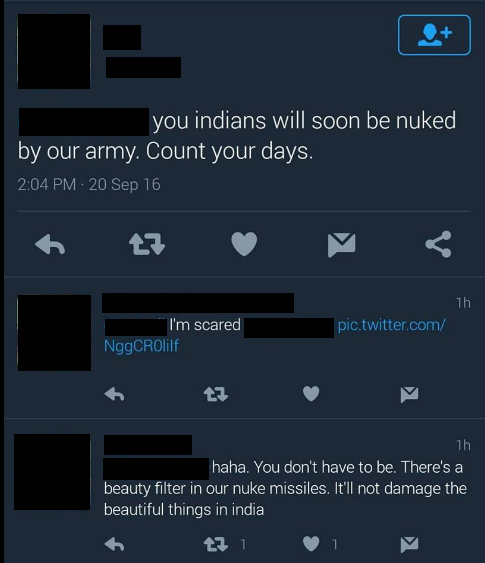 This approach to women as property, beautiful things or commodities without agency who can just be ‘conquered’ continues to depict women as spoils of war — as people who simply come with the deal. It’s as though there’s an understanding that in the middle of debates on war or terrorism, there is ownership over women.

Even the statement by a man who thought he made an apparently smooth response to the woman by telling her that beautiful things in India would be spared has this inbuilt sense. Rape becomes a threat not only to women, but has also become tied to the honour of countries, where men must be protecting ‘their’ women. When one country loses, this ownership of women is automatically and unquestionably transferred to the winners, who are free to treat women in any way that they please, and hence also destroying the honour of a nation.

It’s also the same thought that allows a man to tweet, “how do you think Sati became a norm in India??? Invaders would rape our women. They’d rather burn themselves,” and leave no space for women to speak.

There is, for instance, a tweet from what seems to be a Pakistani handle that has been shared multiple times with the hashtag #TweetLikeIndianMedia. It has the image of a woman wearing a sari that is the Indian flag (because Mother India), and a politician is pulling it off. An arms dealer is forcing the same woman to come closer to him, and a bureaucrat is running his finger up her leg, with his tongue sticking out. A man from the mining mafia is looking into her purse. The caption of the image is ‘Rape Public of India’. All the men tweeting this image say, “This is the situation of women in India and they want wars with Pakistan?”

Every tweet by an Indian man (like this one, making fun of the lack of electricity in Pakistan), is responded to with a smug jibe (like this one) about rape in India. In another one, there is an outline of the map of India, with a women cowering and crying in the centre of it. 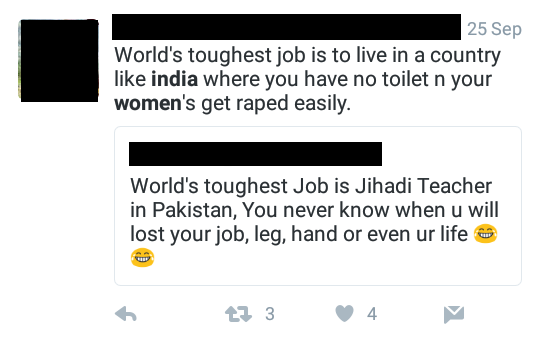 Of course, there is no way of comparing the number of rape cases in India and Pakistan, and this isn’t even the point — these conversations are so hyper-masculine, with men assuming a position of authority, and discussing women in this game of one-upmanship, in proving that their country is indeed better. They do this in jokes, in throw-away lines, as though this is enough to override the idea that they, whichever country they happen to have been born in, consider women to be nothing more than transferrable objects.

Tangled somewhere in the middle of all this is also the complicated dynamic of countries being seen as feminine – as has always been done, and as we saw in the case of the meme on the ‘Rape Public of India’. This was also glaringly apparent in the title of Leslee Udwin’s documentary India’s Daughter. Why should we call Jyoti Singh “India’s daughter”? Sometimes it seems as though the only way we know how to respond to rape is by making women someone’s daughter, or by deifying her, rather than seeing her as her own person.

This is the same idea that is present when people talk about sending ‘our men’ to go and rape ‘their women’, or ‘their men’ talk about coming to rape ‘our women’ — it sounds like the kind of trash talk that we hear at sports matches. And in the midst of all this, several women on both sides are calling for peace — this Facebook post by a woman in Pakistan, for instance, was picked up by the media as a call for peace.

We try to neatly tie up women, the nation, assault, power, and terrorism, where countries take precedence, and in the meantime the lives of women and the realities of sexual assault become less important. The women are evidently missing from this kind of conversation, and yet they become spoils of war.