HomeSportsRio Olympics 2016A Handy Primer to the Indian Sportswomen Going to ...
July 18, 2016 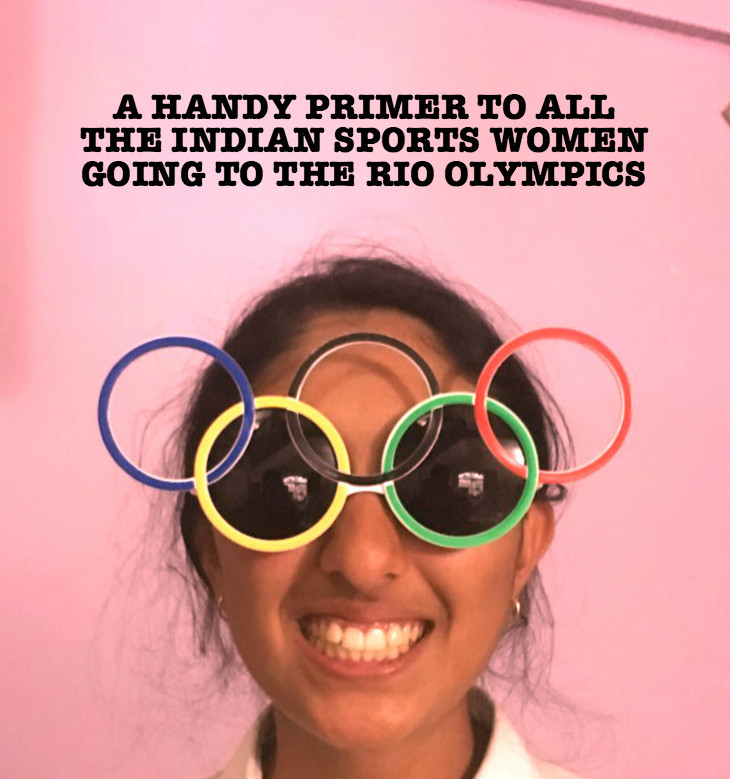 This August, India’s sending its largest-ever contingent of sportspersons to the Olympics. Athletes representing sports as varied as 20-km walking to wrestling will be making their way to Rio in Brazil for the games, which run from 5 to 21 August, as part of a historic group that has several reasons to celebrate already. One of those reasons is that nearly half of the people in that group are women.

The women heading to Rio this year have an amazing range of backgrounds and experience: there are sportswomen like 18-year old golfer Aditi Ashok, who only turned pro in January 2016, and 32-year-old table tennis singles player Mouma Das, who played in the 2004 Olympics.

The only other female table tennis player to qualify this year, 20-year-old Manika Batra — who won three golds and a silver at the recent 12th South Asian Games and who recently said in an interview, “I don’t want to go to Rio and return without a medal” — started playing the game when she was only 5 years old.

Renuka Yadav, a 22-year-old who once used to cycle door-to-door selling milk and whose mother works as a domestic help, became Chattisgarh’s first Olympian when she was named in the 16-member hockey squad announced on Tuesday.

OP Jaisha, India’s top marathoner from Kerala now on her way to Rio, who once said, “As a teenager there were days when I ate mud because I could not starve anymore,” credits her sports feats for having helped her family battle acute poverty.

With heartbreak all round, neither MC Mary Kom nor Laishram Sarita Devi qualified for the Olympics this year.

Twenty-year-old Dutee Chand, who is only the second Indian woman to qualify for the 100m after PT Usha did in 1980, made it in a heroic effort after a massive setback two years ago that might have ended her career. She beat her own national record of 11.33 seconds in April this year to qualify for Rio with a timing of 11.30 seconds. Twenty-five-year old shot putter Manpreet Kaur shattered an 18-year-old national record (17.43 m; Kaur threw 17.96), to qualify for the Olympics as far back as September 2015. It had only been two years since she’d returned to the field after the birth of her daughter Jasnoor.

Other amazing performances were seen from athletes like Nirmala Sheoran, who beat her personal best in 400m by over two seconds, even leading to Athletics Federation of India (AFI) officials expressing suspicion earlier this month and testing her for doping soon after. Sheoran is from Haryana, which is sending 11 women to the Olympics this time around. Roughly 50 women might be headed to the Olympics: after a boo-boo by AFI, there will be one less woman on the track team.

Other performances to look out for this year are killer archery combo of Deepika Kumari, Bombayla Devi and Laxmirani Majhi, who are participating in women’s individual as well as team events.

When it comes to shooting, Apurvi Chandela and Ayonika Paul will participate in the 10 m air rifle event, while former World No 1 Heena Sidhu, will shoot in the 10m air pistol and 20m pistol events. (Just last year, she won a gold for the 10 m air pistol event at the 13th Asian Shooting Championship).

Then there’s Saikhom Mirabai Chanu, the 21-year old Manipuri weightlifter who will celebrate her birthday while in Rio.

In June 2016, she broke a record that remained undefeated for over a decade, set by fellow Manipuri and weightlifting legend Nameirakpam Kunjarani Devi. Devi, who is now her mentor, calls her the kind of lifter that comes around “once in a generation”.

We can’t help feeling this Olympics will be a thrilling mix of talent, guts and glory. And we can’t wait for it to start!

Stay tuned for more names that we’ll be adding to this list!

If You Hate Lending Your Books, You Will Sympathise with This Telangana MLA