HomeHealthInvestigation: Where are the ‘One Stop Cente ...
January 29, 2016 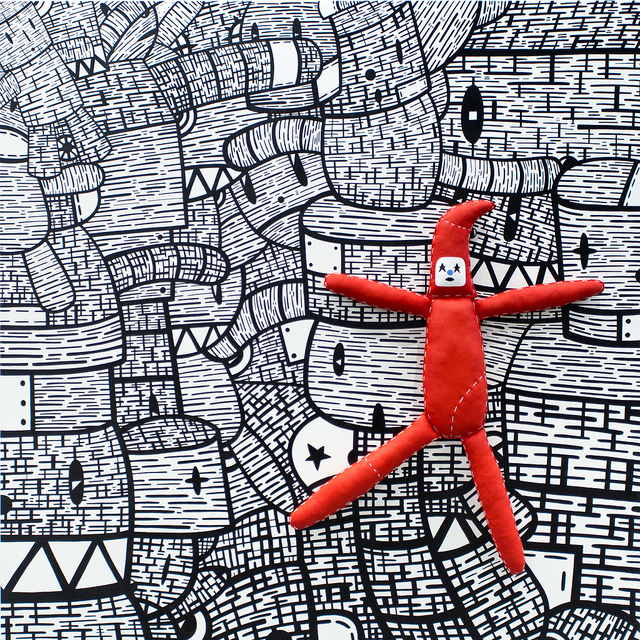 In March 2015, on the occasion of International Women’s Day, Maneka Gandhi announced that “One Stop Centres” would be set up by August 2015. These centres were meant to simplify matters for female victims and survivors of violence, where a number of institutions would be brought under one roof so they wouldn’t have to run between institutions for redressal. The aim was to bring together the police, medical professionals and psychological counselors under the same roof, reflecting a shift in criminal jurisprudence, and attempting to make the victim’s relationship with these processes less complicated.

At Hidden Pockets, an initiative I started to locate and map services around sexual and reproductive health services in Delhi, our team visited government hospitals in November and December 2015 to assess the services provided by OSCs. According to the Press Information Bureau (PIB), six had already been set up in Delhi. We went to five hospitals across the city: AIIMS, Safdarjung Hospital, RML Hospital, GTB Hospital and Deen Dayal Hospital. But when we went in search of these centres, forget functional centres – we found that barely anyone at the hospitals we visited even knew they were meant to have them.

In April 2015, the Ministry of Women and Child Development released the One Stop Centre (OSC) Implementation Guidelines for State Governments/UT Administrations. According to the guidelines, government hospitals should establish OSCs for free assistance for any forms of violence against women.

The OSC is a room established within hospital premises, and is meant to include services like assistance in lodging FIRs, medical assistance for medical examinations, and counsellors for therapy after an incident.

Finding these rooms in the first place was the biggest hurdle we faced during our mapping exercise. “Ye OSC kya hota hain,” was generally the question we were asked back. No information boards, reception areas, or public health co-ordinators existed to lead us to these centres – no one seemed to know if they even existed. Some of the hospitals we visited had maps at the entrance: they contained no mention of an OSC. At AIIMS and Safdarjung Hospital, the nurses and guards were not aware about OSCs and were only able to guide us to casualty wards. We had to keep using the narrative of “rape” (although OSCs are not limited to sexual violence) to get any response from service providers.

The police personnel at Safdarjung Hospital were confused when we asked them if we could lodge complaints there. They told us, “Yahan kaise hoga? Apne area mein kar ke aao, yahan hum ye sab nahin karte.” In all five hospitals, there was no provision to lodge an FIR, and we were informed that we would have to lodge FIRs with police in our respective jurisdictions. Gynaecologists were not available at any of the hospitals, and had to be called in from other departments. The same went for counsellors.

A standard experience at the hospitals we visited was that nurses and guards would keep staring at us when we asked about the centre. We used different Hindi words to make them understand, but it was only when we used the word rape that they would lead us to the casualty ward. This would sometimes lead to interesting conversations among the staff, where they would debate about the fact whether there was such a centre at all. Deen Dayal hospital had none of the recommended provisions. At AIIMS, one of the nurses told us that there was nothing like an OSC there, but she was confident about the fact that Safdarjung Hospital had one, and asked us to go there. At Safdarjung, the staff were mostly clueless about the OSC, though some doctors were helpful in directing us to the Medical Superintendent, who they thought would be able to tell us more.

One of the strangest experiences we had was at RML Hospital – the staff appeared fully informed about the OSC centres, but they weren’t willing to direct us to the one in their hospital. They were suspicious that we were on some sort of sting, and kept insisting on meeting the victim directly before revealing the location of the centre. The doctors refused to hear our queries and instead asked us if we were from an NGO. We figured out that there was probably no centre after all. Inspite of repeated requests to meet the concerned authorities, there was no one who could respond to our queries. The nurses would send us in one direction, the guards would send us somewhere else, the doctors would be too busy to even answer.

GTB Hospital was where we had the most encouraging experience – it did have provisions for a place for victims to come and get themselves checked, though there was still no FIR or counseling service. The staff here were better informed and were willing to help us with queries

The aim of setting up OSCs is to improve the services provided to a victim or survivor of violence. They are meant to have a dedicated set of service providers who will always be on call. Instead, what we found was that hospitals were deploying staff already working in other departments for the purpose. There was a lack of sensitisation to dealing with possible victims of violence, and most of them felt fatigued and over-worked. Having to work at the OSC (however poorly set-up) in addition, was a strain on their already packed schedules.

In December 2015, in response to a question raised in Parliament regarding the utilisation of the Nirbhaya Fund, Maneka Gandhi confirmed that 31 OSCs would be established, for which Rs 10.71 crore had been released. According to the Press Information Bureau, six OSCs are operational – one each in Raipur (Chhattisgarh), Vijayawada (Andhra Pradesh), Karnal (Haryana), Bhubaneswar (Odisha), Jaipur (Rajasthan) and Chandigarh.

As part of the mapping study, we filed RTIs, to check on the status of the OSCs. AIIMS responded: “It is informed that there are two rooms allocated for one stop centre, one is allocated for counselling and second is for examination.” That wasn’t what we had experienced when we visited in person. Safdarjung responded with regard to service providers, “Counselors are available under (DCW) Delhi commission for Women on ‘as & when’ required basis.” In person, we failed to even find the rooms, let alone find the service providers. 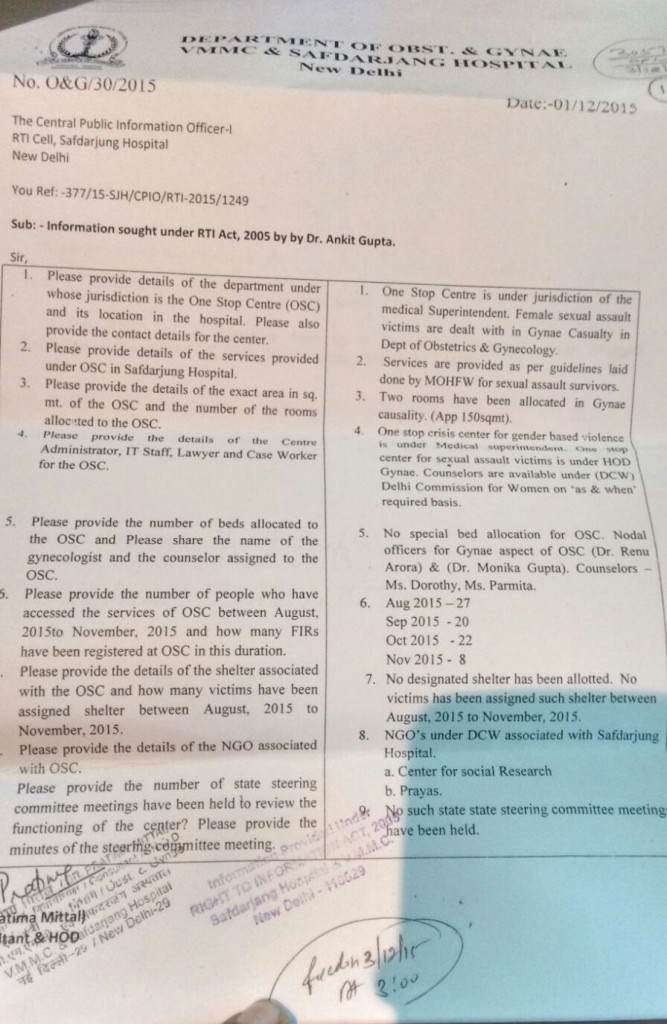 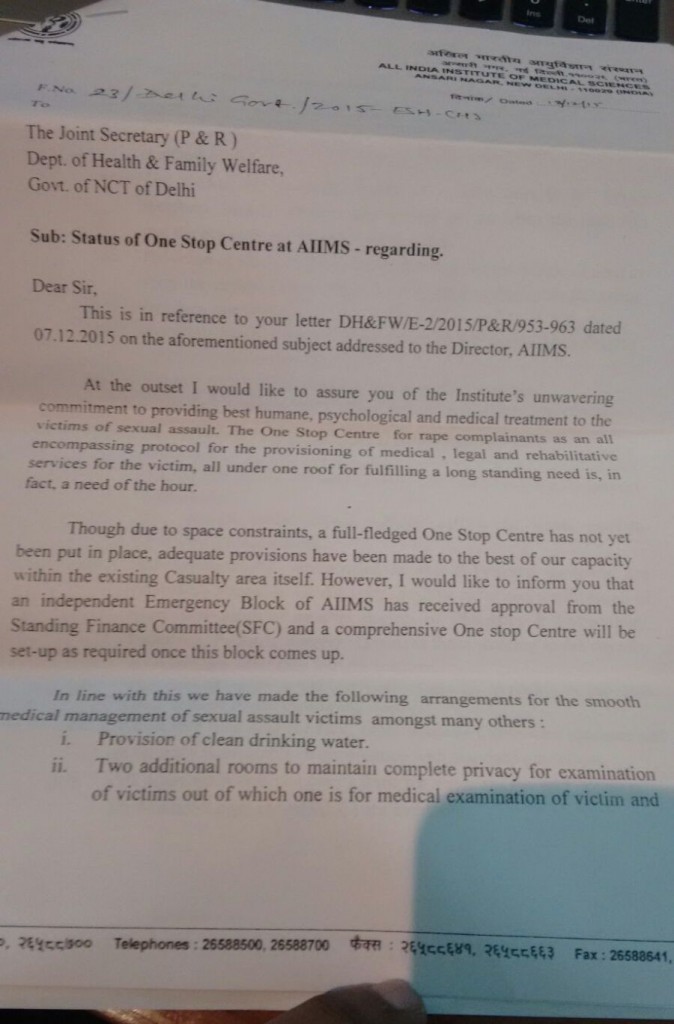 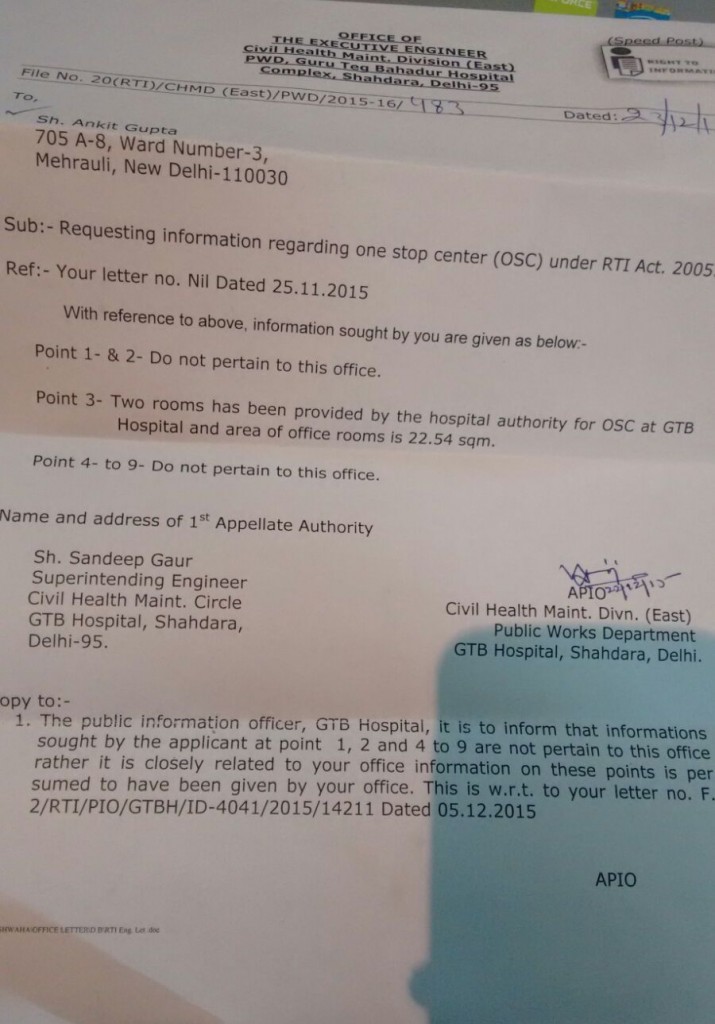 At the end of it all, we’re still confused – do OSCs exist or not? We didn’t find it a one-stop experience; in fact, there were plenty of stops before we were guided to a room with a service provider (if it existed at all).

What bothered us was that it was not just a lack of infrastructure, but a complete disregard on the part of the authorities for disseminating information about the centres among the staff. It’s disappointing to find out that some of the best hospitals in the country’s capital are yet to enforce these guidelines.

The stigma around rape, in particular, makes it difficult for a victim to come forward to seek help. These centres are a step towards making the process more humane. That there’s a lack of support for such initiatives from both states and the Centre, inspite of money from the Nirbhaya Fund being allotted for it, is truly shameful.

A similar One Stop Centre model was attempted in Malaysia, which failed due to the lack of implementation and support from civil society. NGOs were entrusted with the duty of implementing the model, however lack of co-ordination between government and NGOs resulted in failure of the model.

Even within the Indian model, NGOs are allocated the duty of sensitising service providers and conducting training and workshops. NGOs like Centre for Social Research and Prayas (Delhi) are associated with the OSC in Safdarjung Hospital, as per their RTI response. NGOs are being asked to engage more with the government, though their roles still seem unclear and with limited powers.

Ensuring the functioning of these services within the public health system is important. There is so much discussion around convicting and punishing rapists – if half that energy was channeled towards taking care of the victim of the crime, we might be able to do deal with rape and other acts of violence more effectively.

Perhaps it’s time we put the victim first, before going after the criminals.

Jasmine Lovely George is a feminist activist and independent researcher working on issues of sexuality and law in India. She is also the founder of Hidden Pockets, a mapping project on sexuality and spaces.

14 Responses to “Investigation: Where are the ‘One Stop Centers’ for Rape Survivors Promised by the Nirbhaya Fund?”