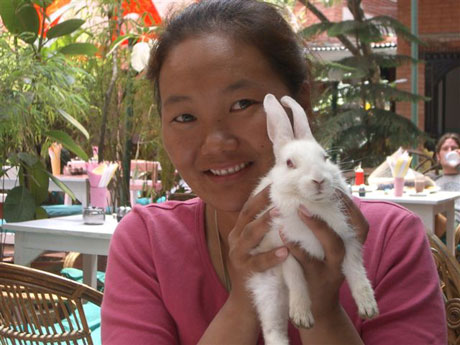 Outside magazine’s latest issue has a fascinating story of a woman climber whose achievements are largely unrecognised despite their gargantuan nature.

Back in 2000, Lhakpa Sherpa finished her first expedition to the top of Mount Everest becoming the first Nepali woman to make it to the top and back down alive. This was only the start to her successful journeys, to the top of the Sagarmatha. Yes, “journeys”. By that we mean she has conquered the 8,000 meter behemoth a total of 6 times. She went on expeditions each year from 2000 to 2006.

The profile talks of Lhakpa’s childhood, growing up in Nepal at nearly 4000 meters. And how when she started climbing, her first summits were two 6,000 meter ranges, Mera and Yala and then the 8,000 meter ranges of the Everest. But this was over a decade ago and surely a woman who has climbed the Everest half a dozen times must be a somewhat recognised figure, right? Wrong.The most successful female climber lives in Hartford, Connecticut in the US and works two jobs, one as a cashier and another as a housekeeper. She has three children and is also a single mother. She just finalised her divorce from her husband George Dijmarescu and obtained full custody of her daughters. A common Google search on Lhakpa Sherpa barely churns out a hand full of pictures and some thin articles but none highlighting her enormous achievements. Unsurprisingly fellow champion climber and abusive husband Dijmarescu yields better search results for himself than Lhakpa. These results include stories from fellow climbers about  Dijmarescu hitting Lhakpa and her teenaged sister during a climb. And a decade of violence and fear at home is partly why Lhakpa is said to have courted the shadows in the last few years.

Lhakpa’s obscurity is also a reflection of how Sherpa climbers are viewed as a collective and nothing more than a homogenous, anonymous workforce, to support the glorious individualistic pursuits of First World Climbers.

Most recently Lhakpa tried to climb the Everest in 2010, she was forced to quit halfway due to the bad weather. She is reportedly preparing for her next expedition and is looking forward to conquering the mountain one more time.

‘It’s Not That Tall, We Can Climb it in a Day.’ The Amazing Poorna Malavath on Climbing Mount Everest When She was 13