1. Say, it is ironic. It probably is. Say, these days nearly everything is. Realise how bombastic that sounds and try to return to the heart of the matter, which is, when one talks about the big city, one usually buys into every available stereotype littering the vicinity. Like the one about this city in which you are about to go watch this old movie about the big bad city, that Delhi at night sprawls and sprawls in its hydra-headed stereotype-spawned simulacra, darkly, dangerously, its own sagacious warning against itself, and you are conscious of this because this movie you are about to watch about the big bad city is scheduled for a late night show at the other end of the city from where you live, where you live a comfortable little student vortex you sometimes think dulls your edge, (you think sometimes you’ll start taking Karate! Taekwondo! lessons because that will really solve things), and you deviously hatch a plot to cleverly invite a male friend along (bribe him, sponsor his ticket) – for cultural expertise, you assure him, because he is Bengali, and your exposure to Bengali cinema is terribly sparse. 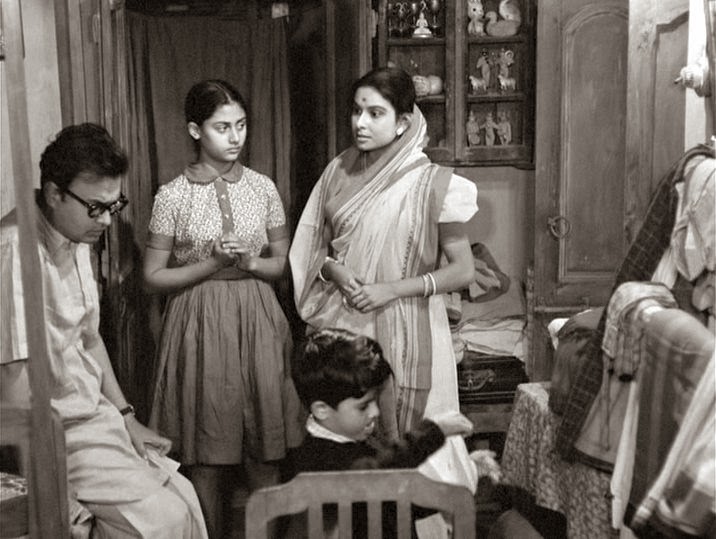 2. Realise that there’s probably nothing new you can say about the 1963 Satyajit Ray film, now snappily redone after fifty years – but absolutely remember to mention that Ray won the Silver Bear at the 14th Berlin International Film Festival for this in 1964, and that it’s Jaya Bhaduri’s debut, to acquire factual mileage for your mild note-making exercise for the film purporting to be a jazzy post-modern web-review. Then say subtly insightful things about Jaya Bhaduri’s role (as Bani) in the film and how she is a small but tight presence, neatly lightens the gender ratio of the cast, and forms an interesting liminal locus alongside the other characters in the spectrum of the family unit, the nuanced exploration of which you will now, with some certainty, posit is the exegetic thread of Ray’s film: how this spectrum modifies gradually against the tumultuous backdrop of the swiftly modernising, chimerical Mahanagar (Calcutta in the 50s), how the film traces the lives of Arati Mazumder (Madhabi Mukherjee), Subrata Mazumder (Anil Chatterjee), Priyagopal – Subrata’s father (Haren Chatterjee), Sarojini – Subrata’s mother (Sefalika Devi), and Himangshu Mukherjee (Haradhan Bannerjee) in tight adherence to their traditional roles while the aforementioned beady-eyed bad city and social processes beyond their control chafe against these roles, and how the film meditatively, quite stunningly depicts their negotiations (with Arati, the quintessential girl in the big city forming the pivotal narrative focus) as they snail together through norms, to the painful arrival of wisdom. 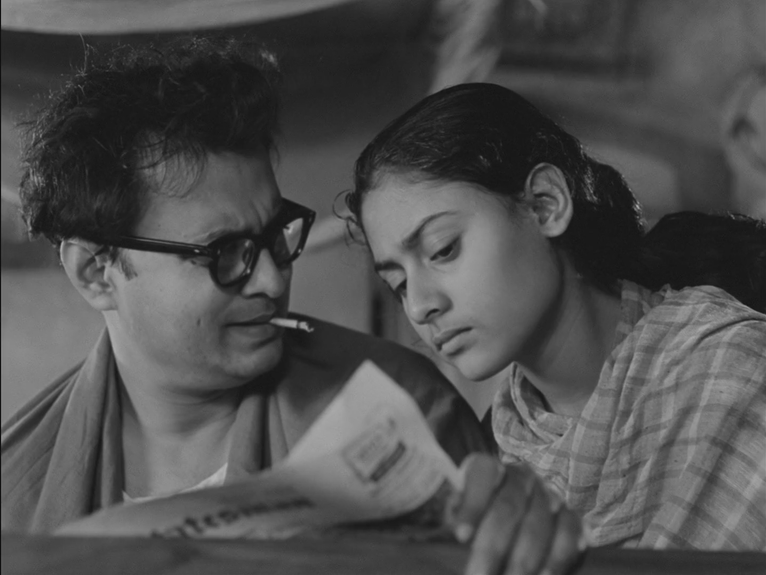 3. Attend to the dialogue. Note how conversations are carefully capricious. Exhibit A: in the latter part of the movie when Arati’s husband has just lost his job and, sitting in a hotel, face hidden behind a newspaper, he notices Arati enter the hotel with a male acquaintance (possessing a modicum of tangible social clout, it appears) and Subrata, immediately alert and wary, surreptitiously listens to the conversation with some amount of trepidation (although, if I were her husband I’d be totally in awe) as she masterfully manipulates the conversation, whilst shrewdly forwarding her sales-pitch using his entrenched prejudices in her favour, as she spontaneously constructs a sub-conversational narrative involving the reversal of the current fortunes of her and her husband – where, contrary to the actual situation, she is rendered unemployed while her husband is a glorified workaholic. Exhibit B: the film opens to Subrato returning home from work to catch Bani at her books and he chides her conscientious study habits, asking, “What’s the good of all this studying, anyway? You’ll only end up in the kitchen like Arati,” to which she offers a quick, precocious rebuttal, saying, “They teach us all that. Domestic science.” Note that, by noting the magic of storytell and subversion in riposte, one might derive conclusions that might contribute to a hermeneutic act wherein one might construe these acts, these conversational manoeuvres the dreamstuff of whopper research papers on counter-historicising, on disruptive conversational rhetoric that might metonymically represent and provide a redeeming outlet to repressed female sexuality, and so on in that vein. 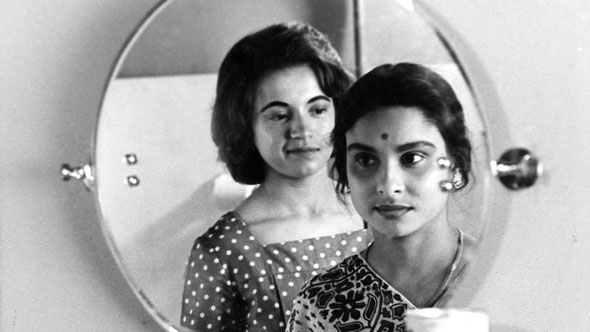 4. Try to dispel the lurking suspicion that Arati’s character in Ray’s film and her portrayal might symbolize, tellingly, the contour of feminine identity in its historical moment, and articulate a social expectation of a particular kind of woman whose rupture from traditional society on the turbulent brink of modernity and rapidly altering socio-economic milieus – the woman escaping the confines of the domestic to, literally in Arati’s case, traverse the blazing, physically draining streets of the city now only just burgeoning into its bigness and badness – might not be as rupturous as one might want to believe. Arati’s move over the trajectory of the narrative as she turns into a saleswoman and befriends an Anglo-Indian and opens herself to the corrosive influence of women of Other races and polished English, but subsequent use of virtue to wobble the masculinity and urbanity of her racist boss (who is also incidentally the microcosmic manifestation of the city’s big-badness rearing into stark relief) who tries to dismiss her friend Edith from her job, appears to privilege virtue as a specifically feminine property. With a degree of uncertainty, be willing to equivocate because, you are simultaneously aware that while it would be stupid to prudently ex post-facto rationalise away the presence of prejudice, it would be equally reductive and unwarranted to try and customise any judgement of the political vision of the film through a rigidly post-second wave feminist gaze. Try to grope your way around the ever-so elusive terrain of grasping the subtleties of historically contextualising subversion.

5. Comment on the technical aspects of watching an old film in a remote corner of the big city, precisely the fact that you have to leave the theatre a good half hour before the film concludes because you have to get the last Metro back (and don’t mention how Delhi at night, for one brief flashing moment appears to hold its breath and converge around the subways that splinter its underside in a pulsing, mechanical crunch, the trains seeping in and out of destinations in a metallic liquid drip as if a gargantuan intra-vascular clockwork belly around which the city reorients), and you are forced to watch the rest on an old YouTube file and you see immediately the necessity for restoration, because this YouTube file, as opposed to the pleasing sharp monochrome clarity of the re-released version, is shaky and dim and interrupted by splotches of white tearing open the screen. (Clearly, you are not gifted in the art of accurate technical description.) Wish that the restoration had also done its bit to revamp the subtitles which are, you learn from your friend, dilute summaries of the situations at hand, and you need to pause the file every two minutes and listen to a fuller explanation before resuming, and this can’t really bode well for viewers who don’t follow the language, or do not have quick access to handy cultural experts/ human linguistic crutches. 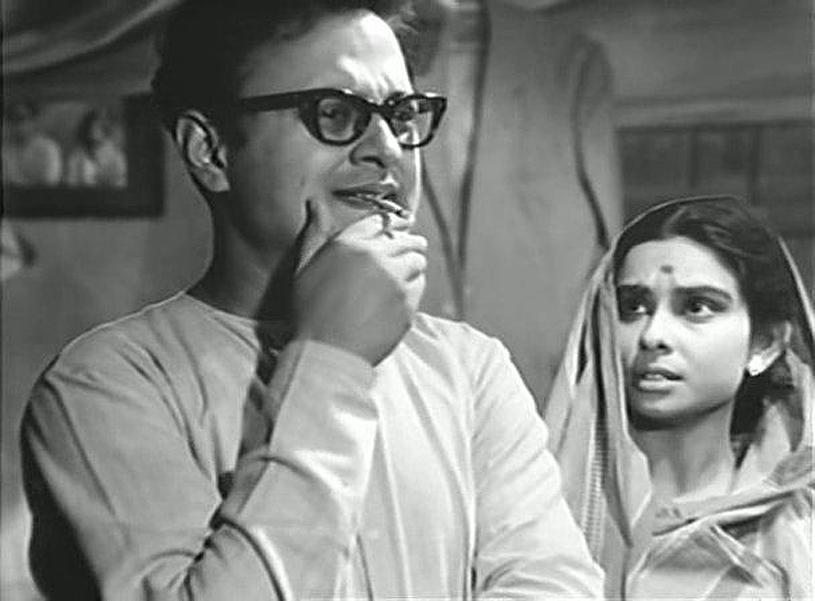 6. Observe incisively that the city is tremendous, is on fire in the synaptic system of the academic ethos that you have been exposed to. Nearly everybody you know is working on, or seems to be interested (said in an affected, faux-erudite voice) in the city – how the city is seen, encountered, produced, in literary work, in history, in sociological surveys of the city, in anthropological delineations of the city, in an aesthetic divining of the absolute essence of the city qua city which might possess a labyrinthine mind of its own (you once heard a friend tentatively ponder aloud), that as soon as you say the city, the city opens itself as a tremendously vicious architectural, archaeological, statistical, epistemological entity (monstrosity?); a creature of economics and rhetoric and whatnot. As in Italo Calvino’s 1972 masterpiece Invisible Cities, in whose mellifluous, chameleonic cities, “it is as with dreams: everything imaginable can be dreamed, but even the most unexpected dream is a rebus that conceals a desire or, its reverse, a fear.” As in China Miéville’s 2012 offering, Railsea, “The city’s a heart, in that a heart and a city were sutured into a third thing, a heartish city, and cities are heart-stained, and hearts are city-stained too.”

7. Observe, in the backdrop of this tightly wrought tapestry of allusions that weaves itself into life at the first fleeting mention of the mere word ‘city’, that it is a relief to watch an old movie seemingly unaffected by an explosion of references, which still stands outside the purview of the city-watcher’s – at least this city-watcher’s – expectation of an emphatic treatment of the city as, first, impersonal geopolitical unit, later, a poetics of space, and be pleasantly surprised that the forbiddingly named Mahanagar’s apparent eponymous inevitability of the structure consuming the fragile population it houses, is not forbidding as much as poignant, because the characters are regularly redeemed, and when they fail, their failures are deeply affecting and moving. Mahanagar, then, is less about the anonymous workings of the insensate Mahanagar and more a trail to re-envisioning the city not as impersonal structure, but also home, a Hansel-Gretel smattering of breadcrumbs of moments of humanity back out of the wicked woods to the throbbing, compassionate centre of people as the film concludes hopefully, with Arati looking up at the window-speckled buildings towering above her to say, “That’s a huge city full of all kinds of jobs. There must be something in it somewhere for one of us at least.” Watch the camera pan out as Subrata and Arati disappear into the streets of Calcutta.

CS Bhagya is pursuing an M.Phil in English at the Centre for English Studies, JNU. Her poetry and articles have appeared online and in print at Eclectica, The Four Quarters Magazine, Coldnoon Travel Poetics, DNA, Times of India and Tehelka, among others.