HomeCultureThe Mahabharata as Some Dudes at a Gurgaon Costume ...
September 9, 2016

One very specific thought pestered me more than anything else as I sat through watching Mama’s Boys, written and directed by Akshat Verma (and at 16 minutes, you really get that feeling that you sat through watching something that wasn’t an intended binge-watch of, y’know, Silicon Valley). The thought was this: “Should I watch Delhi Belly again? Was it this painful?”

Because, you see, I only remember how much I laughed when I watched the film Verma had written back in 2011. Because here was a movie that was showing me the underbelly of so many things – Delhi, of course, but also friendships, and boys, and relationships, and jobs, and expectations – stuff that to me was real life, but on the big screen, we had to call it underbelly. And once it’s on the big screen, bas, you feel it’s all acknowledged, celebrated. Vindicated, even. When did a few oversmart gags hurt anyone, right? And mainstream Bollywood could always do with a dose of alt storytelling – it can only be a good thing. 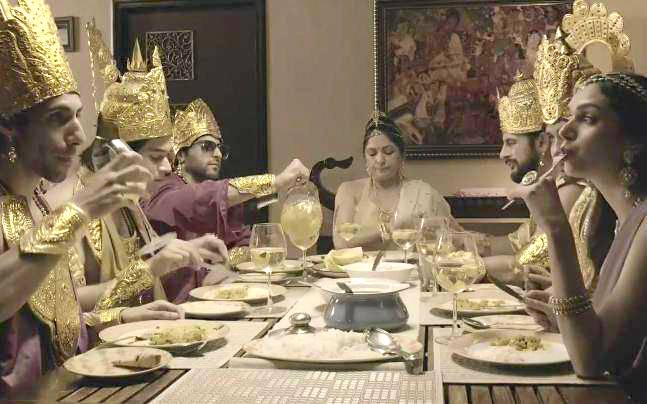 But when you so decide to trip on The Mahabharat – a premise that’s already sitting smug in its cleverness and wink-wink-look-what-I’m-doing – you better work a little harder. Because everyone from schoolchildren in Shimla to Irawati Karve to Mahashweta Devi to Ekta Kapoor and most recently Trisha Das have worked on interpretations of Mahabharata knowing that understanding of the epics is interpretation.

Instead in Mama’s Boys, a Royal Stag Barrel Select Large Short Films series on YouTube, produced by Flying Unicorn Productions, we get a whole lot of lip service to this being 2016 – gym workouts, slang, malls, and that distinct body language of all its actors pretending to be Arjun (Amol Parashar), Bhim (Arunoday Singh), Kunti (Neena Gupta), Draupadi (Aditi Rao Hydari) etc. Why do we need to pay lip service to this being 2016 when we’re already living through 2016, is perhaps not a question we should spend time on but we are forced to ask it since Mama’s Boys is not telling us anything about the Mahabharat or 2016. Arjun wins Draupadi in an archery match and brings her home only to be told by the matriarch too immersed in her chores to notice what (or who) “the prize” is, to share whatever it is he’s got with his brothers. This is exactly what happens in this “interpretation” as well, with one epic difference – Arjun spends the almost-16 minutes of the video trying to convince his brothers to give up “their stakes” in Draupadi. But of course, they’re all such mama’s boys, they don’t, being the implication.

It’s as if the writer said: “Let’s change the settings mode on the Mahabharat app to see how all these characters would look if they were around today – like when we go to a costume party in Gurgaon.”

In fact, one of these mama’s boys, Yudhishthira, reminded me of this one guy I met at an actual costume party in actual Gurgaon – he had “come as Morpheus” from The Matrix and was almost as sleazy – this new YouTube Yudhi I mean, not Morpheus. And maybe that’s fun, even funny, but surely only as a party game, or an app at the most, to entertain ourselves.

Mama’s Boys interprets by giving us a Draupadi who plays the airhead routine to the hilt – to such a hilt in fact you feel she’s going to keel over. And you also feel it’s a trick. Surely, you can’t be showing me she’s just a dumb, pretty little thing who indulges in some good ol’ Mean Girls styled manipulation on the side? This being 2016, is there a twist for the unwary? No.

Mama’s Boys interprets by trying on some tired jokes around being gay (Oh the twins Nakul-Sahdev were always hanging out together, remember?) in some attempt to come across as cool or funny or maybe even progressive, but only ends up giving off that same old homophobic vibe.

Mama’s Boys interprets by making me feel as if I’d walked into a rehearsal of a play at a cultural festival in an engineering college that was supposedly riffing on The Mahabharat, which was only working for the 10 people involved in it, who would all be going out for drinks together after they were done and high-fiving each other. Oh wait!

I’m willing to overlook it all – paring down Hidimba (an interesting female character if there ever was one!) such that I can’t even call what-they-just-did reductive; the criminal wastage of Neena Gupta; even the overstretched tinday plot point – if Mama’s Boys had at least given me a punchline. A takeaway I could laugh at for a whole 2 minutes later – even that would have made it a 16-minutes well-spent.

Delhi Belly had a punchline. So I’ll just settle with interpreting that one, or modifying it.

Epic shit happens. Maybe this Mahabharat should have stayed the animated gif it was in Verma’s head.

Pooja Pande is a writer and editor with a keen interest in gender issues. Her first book, Red Lipstick, a literary-styled memoir about transgender rights activist Laxmi Narayan Tripathi, is just out in bookstores.

One Response to “The Mahabharata as Some Dudes at a Gurgaon Costume Party?”