‘If women are talkers, then men are mansplainers’ is how the stereotype should ideally read. While it’s difficult to trace the roots of mansplaining (you know, explaining something condescendingly to a woman just because she’s a woman), a video attempts to trace its roots back to the Stone Age.  It takes a humorous dig at mansplainers by staging how stone age men must have mansplained to stone age women.

According to a report, the video, by YouTube Channel, Funny or Die, has garnered 1.2 million views on Facebook. In the video, a pre-historic woman, Bunga is attempting to light a fire when Ugg, our friendly neighbourhood mansplainer, tries to explain to her how it’s done. She then goes on to call him out on his mansplaining. The exchange is fairly hilarious, if only too familiar.

The video ends with a woke Ugg understanding his mansplaining-ness and attempting to tell other Stone Age men on why its wrong. If only this was true, we could clipped the bud in the early pages of history.

But hey, how can there be a video that calls out on mansplaining without butthurt men spitting viciously all over the comments, right? 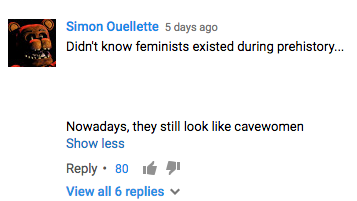 The video also shows another way in which a woman deals with mansplaining. She shoots a spear through Ugg to prove her mansplaining partner (who’d been telling her how to sharpen a spear) that the spear is indeed sharp. Point well made.

All the mansplained ladies, laugh this off with a pinch of pre-historic salt. After all, we didn’t start the fire.