Two days before the release of the Marathi film A Dot Com Mom, its director Meena Nerurkar (who also played the main character, wrote the script, and produced the film) tells me she’s very upset. “Right now I’m under stress, in my Marathi-speaking areas I’m not getting any theatres,” she says. “Why should I release it in non-Marathi areas like Andheri? I’m not getting screens in Vile Parle or Shivaji Park, where I lived. Every theatre has gone for Dhoni.”

A Dot Com Mom, now in theatres, is about an elderly woman from rural Maharashtra who experiences culture shock when she travels to be with her son in the US. Reviews of the film in the English media have so far been lukewarm, flagging its length, its outdated premise, and stereotypical characters like the selfish daughter-in-law and loyal son, but seem to agree on Nerurkar’s solid performance. One reviewer said, “Ultimately, if you see A Dot Com Mom, you should see it for the leading lady herself.” The idea for the film, which Nerurkar calls “the opposite of English Vinglish”, was born out of Nerurkar’s observations of her patients’ mothers and mothers-in-law in Philadelphia, where she is a practising gynaecologist. When she was asked to write a screenplay a decade ago, these women came to mind. “I’ve lived in America for 40 years, there are still so many people who don’t speak English. All you need is confidence,” she says. 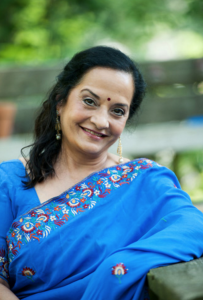 Did her personal trajectory overlap in any way with that of Sulabha, the film’s protagonist, who goes from her village to her son’s home in the US after he makes it big in the IT industry, and finds herself alarmingly out of place at first? “Unfortunately, no, not at all. I never faced the difficulties of the protagonist, I’m from a very affluent family,” she says. What does she think audiences will relate to in the film? “Whoever sees it is going to love this movie,” she tells me confidently on the phone from Mumbai, not quite answering my question.

Nerurkar’s multiple roles in seeing A Dot Com Mom through are a reflection of the many hats she wears. She’s a 67-year-old US-based doctor who practices medicine on weekdays, and writes and acts on the weekends. When asked about her involvement in the arts, she says, “Oh my god, it’s been all my life. Even in kindergarten, I was on stage.” Trained as a Bharatnatyam dancer, she would perform all through school and college, and later became involved in theatre. Medical school, marriage, and moving to the US didn’t come in the way of her cultural activities.

In 1991, she started her own production company, Kala Bhavan, to promote Indian performing arts. “We started doing Hindi, Gujarati and Marathi plays. I also started writing in 1998, first with columns in newspapers. Then one-act plays, then two-act plays. One of my plays is running right now on the Marathi stage,” she says. Among the many awards she’s received are the Maharashtra State Award for Best Playwright for her musical Awagha Rang Ekachi Zala, and has been awarded for her role in propagating Marathi culture outside India. She has also written for the Marathi paper Saamana (set up by the late founder of the Shiv Sena, Bal Thackeray, with whom she has been photographed on a few occasions. That a woman filmmaker should make a regional language film with an elderly woman at its centre is as exciting as her being seen to promote Marathi culture with approval from the late Shiv Sena leader is discomfiting).

Beyond the Marathi stage, Nerurkar has appeared in American films like Sleepwalkers Anonymous and Dr Ravi and Mr Hyde, played a role in Gauri Shinde’s English Vinglish, and acted in the American soap One Life to Live. 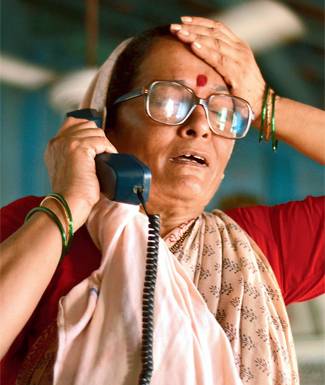 Right now, Nerurkar says, she’s swept up in seeing her film released, what with the film’s producers backing out mid way, leaving her to take on the responsibility of the creative as well as the business end herself. It’s her own funds and effort that have gone into completing and marketing the film, she says. She’s certain that she doesn’t want to be involved in production for the next couple of films she works on. “It’s all business, and I hate that,” she says emphatically.

As for future plans, Nerurkar says she doesn’t want to focus on anything else until everything to do with A Dot Com Mom is over and done with. But she is working on two plays, and further down the line, a film on Anandi Joshi, the first Indian woman trained in western medicine. Joshi travelled to the US from Calcutta in 1883, as a 19-year-old, and enrolled in the Women’s Medical College of Pennsylvania. She had been through child marriage, pregnancy at 14, and remained in poor health. Living in America worsened her health, and she had contracted tuberculosis while abroad. Shortly after her completing her training three years later, she returned to India but died in February 1887, just days before she was to turn 22.

“Five years ago, I had done a play on Anandi Joshi’s life in the US,” says Nerurkar. “Being a doctor myself in Philadelphia [which is in the state of Pennsylvania], I can understand some of what she went through, but I cannot imagine what this girl must have faced at the time. Everything was against her: she was a vegetarian, she wore saris because her husband wanted it, and she lived with an American family for three years in severe American winters.” Nerurkar finds Joshi’s determination to learn medicine despite the challenges inspirational, and is charged about bringing this slice of Indian history to cinema. “Her story needs to come in front of people,” she says.

Motherhood is Biological or GTFO. What the New Sridevi Movie MOM Tells Us