HomeCultureMissed Gender Bender? We Feel a Little Bad for You
August 6, 2015

If you missed last weekend’s “Gender Bender” show jointly organised by Goethe-Institut Bangalore and Sandbox Collective, Bangalore, oh sad. We feel a little bad for you.

The evening began with “Goef Josef”, a delightfully OTT music video by 21-year-old Zui Kumar Reddy filled with pop culture references of a demolition-inclined Miley Cyrus and the specific madness of the strange costumed characters outside Kids Kemp, Bangalore. Holding together this orgasm-caper are the crazy lyrics that begins with “I want the cunniling that lingers” and later hilariously exhorts you to both “comb your hair” and to “bow to my tits”. Watch it here, at its YouTube premiere!

“A Brief History Of Your Hair”, a two-person performance, was one of the most successful of the evening. Deepika Arwind, its writer, had the unfair advantage of having extremely beautiful performers we spent the whole eight minutes sighing at. In her director’s note, Arwind speaks of using “memory and associations with hair that she had growing up in a Sikh family, and also her entangled relationship with it.” The actual performance held no sign of this solemn intent. Using comically oversized ‘hair’ props, the performance alternately revelled in and mocked every exaggerated rendition of stagey-genderedness. The result is a gender-fluid rom-com island of playful sexiness.

We also loved Afrah Shafiq’s installation: a trio of delicate and striking GIF postcards. “If gender, like the body, is a garment assumed at birth and shed at death. When you think of your spirit, what is its gender?” amidst snails mating (“if both give birth, who’s the mother?”) and King Ila who changes from man to woman with the changes of the moon. 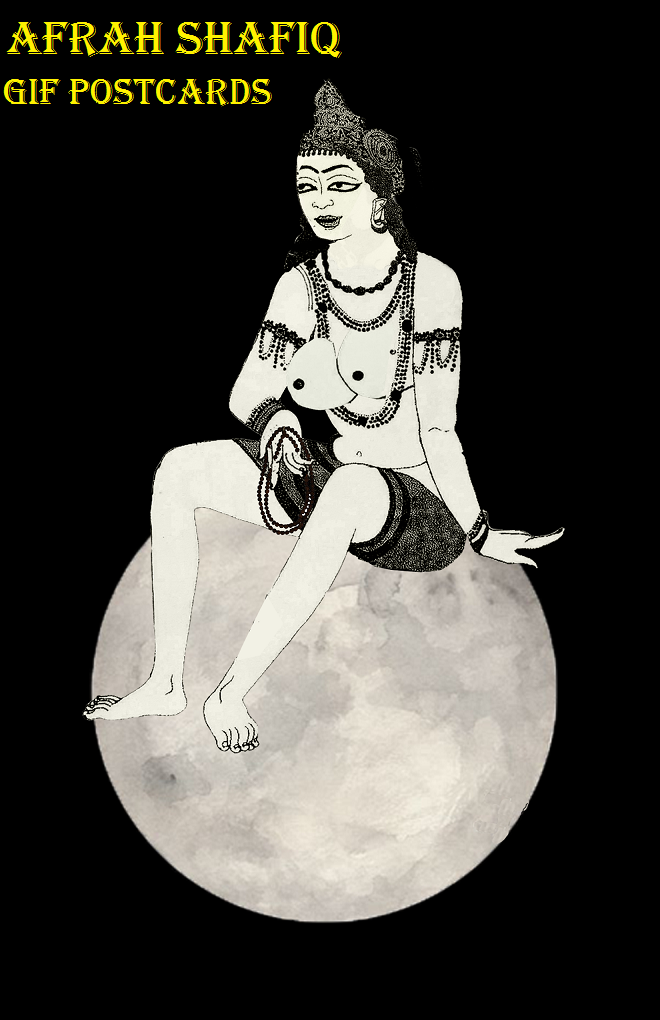 “Rendu Ghatam” performer Sumana Chandrashekhar begins dressed in a white kurta and red turban. Though the intention was gender-bending, some of us were distracted by thoughts of what was that Dark Arts teacher with the turban in which he was hiding something called?(Quirinus Quirrell? Yes, thank you.)

Chandrashekhar is the only woman student of the only woman ghatam player in the country. In her little soft voice Chandrashekhar told deadpan, piquant stories of this particular world only occasionally marred by a maudlin note. Chandrashekhar’s monologue was accompanied by the occasional audio recording of her interview (of her teacher, of a similiarly rare female ghatam maker) and photographs. But it was her bare sentences that painted the best picture (that of her ghatam making the lonely trek through the scanner at the airport, for instance.) When Chandrashekhar tells the wonderful story of her playing the ghatam to the audience of a scornful airport cop and startled fellow-passengers you really don’t need the undiluted follow-up of “can a woman play a ghatam?”

These questions were truly unnecessary when the gender-bending was so successful with other images she conjures up, the mridangam player who refuses to be on stage with a woman, the thought that Ganesha invented the ghatam, playing first on his pot-belly, the thrilling suggestion that Valmiki described Soorpanakha as having a pot-belly.

The evening’s most disturbing performance was Hina Siddiqui’s one-person show “Super Villain”. Siddiqui’s protagonist is a jolly, gharelu character, making cold coffee and offering oil massages to her visiting friend. She is a few months away from getting married and all ready to move to Indore to be with her husband’s joint family. She says, she needs one last adventure and all evening she tries to enlist her visiting friend in it. Only, her choice of adventure is drugging men and raping them. (To be precise, she uses alcohol not drugs because as she says, “I am in IT ya, not a diamond merchant.”

What unfolds is her fond remembrance of rapes past. Her first, her latest, her rules, her MO. She rolls these stories around like marbles collected and admires them and fondles them. All the while continuing to be Everywoman setting up to get married.

The intended discomfort is not quite achieved, partly because Siddiqui’s performance of the excellent material is fairly minimal in range. At no point did her delivery of a rapist’s easy excuses make the giggling audience squirm. Instead everyone enjoyed the genuinely enjoyable performance of female desire framed in traditionally male terms. (His no-no-nos just ruined my rhythm. I just unzipped him and put him in my mouth, etc etc.)

The balance of obvious and maudlin: surprising and insightful tilted hopelessly in “Innocent Transgressions” by Vikrant. His piece about a young boy who loved dolls, dress-up and house-house unleashed one tiring trope after another. In his case his scenery-chewing, cheerful performance pulled the paint-by-numbers material out of the doldrums. When a man in a sari is supposed to be a radical performing moment, some of us want to give up in life.

Luckily, Vikrant’s piece was followed by another man in a sari in Anuja Ghosalkar’s “Lady Anandi”. Salmin Sheriff’s great, beaky, tragic face sticking out from a primly draped sari could be an art installation itself. Instead we are taken rapidly through charged, potent moments from the past and the contemporary. From the life of a Marathi actor who was celebrated for playing grand female parts, from his childhood. When he wanted to become a wrestler and resisted being hustled into the family’s theatre company. When a woman fan who comes backstage fully in love and leaves in disgust when Lady Anandi asks to be loved for himself/herself. In the present a little girl remembers her great-grandfather whose sari-clad moments she sees in a photo album. The child actor was appropriately adorable but it was only in her lines that the piece slips out of the mysterious and tender into the obvious. Do desis really ask girls to “wear pink, not blue?”

3 Responses to “Missed Gender Bender? We Feel a Little Bad for You”