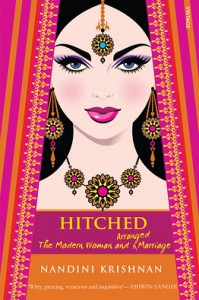 Nandini Krishnan’s Hitched: The Modern Woman and Arranged Marriage traces the stories of independent, educated women who face or have faced the prospect of arranged marriage, and all it entails: unknown suitors, success stories, decisions gone wrong, and unexpected twists.

From the recently-married to veterans, the women in this book have plenty to say that is helpful and relevant to those considering arranged marriage. In Hitched, Krishnan interviews a number of women and men across a wide spectrum, weaving together personal narratives that are relatable on a number of levels.

Shruthi: Take us through the process of how you found the women that were featured in this book. Is there a reason that they remain anonymous?
Nandini: I was looking for women who fit specific blocks in a grid within the broad description of “urban, educated, and modern”. I wanted people from across the country, across religions, and also who were in various stages of marriage – looking for a husband, newly-married, women with children, and divorced.

Then, I wanted to speak to artistes, such as dancers, singers, and writers, whose professions and eccentricities and, umm, special needs the families they marry into will have to accommodate. And then there’s the other side – women who will need to accommodate their spouses’ professions – and this is why I’ve spoken to a woman married to an army officer, and one who is married to a mridangist. I wanted to look at both happy and unhappy marriages, and also issues like moving abroad after marriage, marrying across cultures, dealing with infertility, and whether there is such a thing as the right age to marry. Fortunately, I’ve worked in several industries across the country, so I knew quite a lot of these women personally. Then, I started asking around for women who fit the categories I hadn’t found yet.

There were two reasons for most to go with pseudonyms – one is that, however happy a marriage is, it is private. I was asking intrusive questions about intimate issues. Even if they were comfortable talking about these things, or all right with their friends knowing who they were, I don’t think anyone wants parents and in-laws knowing about their sex lives or fights or coping mechanisms or exes. Also, many of these women are my friends, who trust me, and who may forget that these stories are going to be published, even when I’m carrying a recorder, because they’re so used to discussing their personal lives with me. I showed them their stories before publication, but I was aware that seeing an email from me would be different from seeing the content of that email in a book on a shelf.

Each story has focused on one aspect of finding a spouse and marrying him and the marriage thereafter. Was it a conscious decision to piece the book together like this?
Yeah, it’s all come together quite nicely, no? (Laughs) No, it wasn’t a conscious decision, really. The only part I assiduously planned was the sort of profiles I was looking at. And then, it worked like an algorithm (with a super-intelligent computer). It simply turned out that with each woman’s – and man’s – story, one aspect of the spouse-hunting took precedence, at least in their memories. I myself found that I could relate to a lot of their stories. I’ve never been married, of course, but things they said took me back to aspects of the relationships I’ve had.

The book has a ‘How I met my Husband’ section and then divides itself into various other aspects – fights, language, culture, pasts – why did you structure the book in such a way?
Honestly, the book structured itself that way. Initially, I was planning to look at only specific aspects of a marriage, and use interviews as ‘vox pop’. But my first interviewee happened to be a divorcee. And she told her story so beautifully that I felt I was best off keeping myself out of it. With the next few people I interviewed, the same thing happened. So, the structure fell into place very organically. The book somehow became partly the stories of the women I spoke to, and partly what I had once intended to be the whole book – chapters on issues that come up in an arranged marriage.

The ‘How I Met my Husband’ part also satisfies a certain voyeurism in all of us. Well, in me, at least.

You have also spoken to men and I found their confessions more candid. Why do you think this is?
Generally speaking, men are just naturally less diplomatic and less worried about what others may think. Well, to be fair to them, I think they thought as much about marriage and the relationships they were getting into as the women did. Their turn of phrase makes it seem more lighthearted. Some are very close friends of mine. Another of my male interviewees was raised in the US, and he’s quite outspoken about what he likes and what he wants and what he doesn’t, and says as much in the book. He puts it down to the American way.

How do you view the new-age arranged marriage process?
You know, at some point, I realised that my idea of a perfect man would look like Arjun Rampal, write like Vikram Seth, have Jerry Seinfeld’s sense of comic timing, and behave like Kishore Kumar in Chalti Ka Naam Gaadi (with the vocal acrobatics and finesse too, naturally). Anyway, problem is, none of them is Tam-Brahm. I think, for all its pretensions of modernity, the arranged marriage process has several antiquated parameters. The worst of these are caste confines and this obsession with horoscope-matching. Of course, two women feature in Hitched who broke both norms. But that’s not usually how it works.

I didn’t see myself having an arranged marriage, ever, and it was something I half-heartedly allowed myself to be talked into between boyfriends. It isn’t for everybody. I think one really needs to decide whether an arranged marriage will suit one, based on what one wants from life.

Shruthi Padmanabhan is a freelance writer who is currently based in Deolali, Nashik.