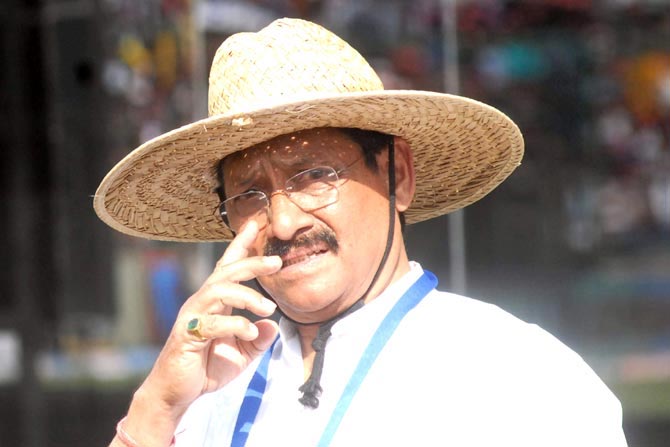 A young cancer researcher from Hyderabad went to Berkeley some years ago and told us she was ruing the day that her Ph.D certificate would be signed by Arnold Schwarzenegger in his capacity as governor of the state of California. She’d probably feel that her fate was better than what awaits fashion students in India now.

On Saturday, 68-year-old Chetan Chauhan was appointed as the new chairperson of NIFT, and if that name sounds familiar, it’s because the ex-cricketer was a long time opening partner with Sunil Gavaskar. From the looks of it, the only credential Chauhan needed to become the head of NIFT was to be a BJP MP. Chauhan has gone so far as to admitting that he was appointed partly because he was a BJP leader, saying, “This is a Government of India appointment. The names (for the post of chairman) are sent by the Ministry of Textiles…preference is given to people in the party (BJP).”

Obviously happy people on Twitter had a field day when they discovered this news and lost no time in predicting similar appointments that the government might make.

Ex-Cricketer Chetan Chauhan is Chief of NIFT.
Love his fashion.
Here he is in Shikari Shambhu’s new Fall collection. pic.twitter.com/PLzBo0i9n2

After #ChetanChauhan takes over #NIFT head, fashion shows will be like… pic.twitter.com/dsc8OQeL8G

Others such as the AAP were way less happy with this gift from absurdity heaven and condemned the government for this controversial appointment ever since the announcement was made.

We spoke to fashion designers who have been fuming from the moment they found out, that an ex-cricketer is now the head of the most prestigious fashion and textile design institutes across the country.

Deepika Govind, a leading fashion designer, based out of Bangalore, said, “This man is a novice in the industry and is being catapulted to the top simply because of political patronage. It is unfair to ignore the opinions of industry experts.”

Designer Anshu Arora runs the label Smallshop in Bangalore along with partner and fellow NIFT alumnus Jason Cheriyan. Arora said, “We have to understand that aesthetics in India are heavily undermined; we have a huge treasure trove of crafts that exist in our country which are on the verge of disappearing. It is important to treat any design institute or textile institute in the country with care. I know that there are a lot of people who better understand aesthetics and the origins of design in this country. We need someone who has done a lot of legwork in this field and hence is sensitive to environmental needs. Otherwise we’re going to be left with a lot of malls, foreign brands and Indian brands that are imitating foreign brands.”

Chauhan has revealed, by his own admission that he is a busy, busy man. He is the vice-president of the Delhi & District Cricket Association, runs a cricket academy, holds a senior position in the BCCI, and also owns a newsprint business called Coral Newsprint. But time management is no issue for him, since he revealed a clear breakup of his work schedule, “I will spend 60 per cent of the time in DDCA, 20 per cent at NIFT and 20 per cent in my business.”

He made his priorities clear by disclosing that he doesn’t intend to be the chairperson of the prestigious institute full-time. “Whenever an urgent matter is required to be addressed, I will be there. I will be going there once in week. I will have an office there, but I think I will be spending more time at DDCA. I will have to devote some time to my company (Coral Newsprint), too,” he said.

Chauhan retired 35 years ago, (without ever making headlines for being a flashy dresser in the Indian cricket team may we add?) He is convinced that the government picked him to be the chairman of the fashion institutes because he is an “international sportsman” who has spent “quality time banking.”

The NIFT Act of 2006 states that the chairperson to the statutory body under the Ministry of Textiles is expected to be an “eminent academic, scientist or technologist or professional to be nominated by a Visitor of the institute.” Chauhan’s credentials and the post he was appointed for are as different as chalk and cheese. If one is to stretch the chairperson’s qualifications in the act, Chauhan is neither an eminent academician nor a scientist and a technologist. It turns out, he isn’t awesome at what he has been doing so far either — the fact that DDCA is an organisation that is riddled with controversies of corruption and mismanagement seems to be largely ignored.

Designer Rina Dhaka snapped, “I would use this moment, basically to just say, why not us? We do have a plethora of talent. What is wrong in our appointment?”

Perhaps what trained, experienced and thoughtful designers are missing the ability to drop wisdom as unselfconsciously as Chauhan does, “My fashion sense is not being flamboyant but well dressed. I am not dashing fashion-oriented because I have to go with what suits my age. But I like to dress up smartly and well.” Okay then.