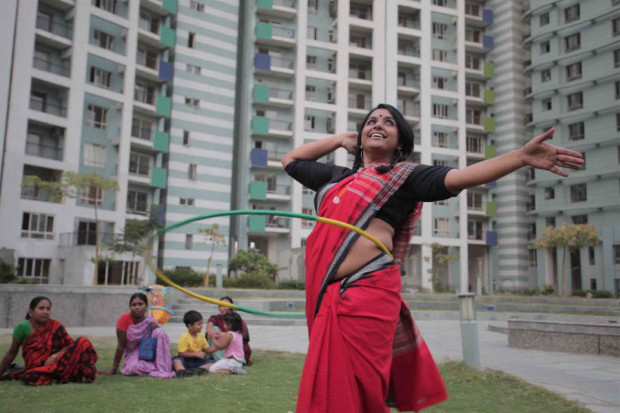 Is Delhi a different city if you are in a sari? Auto drivers insist they clean their autos before I step in, policemen give directions with a white-gloved benevolence, elderly people address me in long, idiomatic Hindi sentences that they would not otherwise presume to unleash on me.

In other cities I’ve been in, the sari has never quite had the same effect. In Kolkata and Chennai, you are ignored as part of the landscape. In Bangalore I was often mistaken by well-intentioned  gentlemen on scooters and in cars for a sex worker, and on one occasion for a hijra activist (or to borrow a friend’s memorable diminutive, a “cool hiji”). In Bombay if you are not a woman born in a globe-trotting nauvari and you still wear a sari, people slot you away as slightly soft in the head. (The other exception are Bombay activists. As a young, politically minded person I was constantly distracted by the canniness of feminists in synthetic saris which looked like handloom but didn’t leave you a hot mess in the train.) This being the evidence, we can’t presume it’s my resemblance to iconography of Bharatiya nari modesty that had an emollient effect on passersby in ITO and Chittaranjan Park.

After publisher Shakti Bhatt passed away, her friend, the writer Rana Dasgupta told a story at a memorial meeting. Shakti was effortlessly chic, with trademark OTT lipstick and legendary shoes. Not long before she died, she tried her hand at wearing a sari. It hobbled her so much, she swore, that next time she’d wear boots underneath. Shakti had it right. Worn precariously, draped variously, matched cavalierly, there is little the sari can’t do for you. When I wear a handloom, I am, as my sari designer pal joked, “putting a little into my ethical kitty”. But when I wear my handloom with a “Hello Kitty” spaghetti top, I am saving the sari from boredom. In the magazine where I last worked, a platoon of young women wore saris regularly. Some of us brought to it the peculiar slacker vibe that I’m convinced is the only thing ultimately keeping the sari away from brass plaques and museums.

I did have the uncharitable thought that Delhi rewards sari-wearing young women for “trying”, being given a gold star for public-minded effort, like someone planting a tree on the roadside. Certainly this suspicion prompts me to avoid my elderly Punjabi neighbour the days I am in a sari. She reacts much as she would if she had seen me trying to reinvent fire. Recently I thought I was being clever by passing the buck to Tradition. “You keep wearing saris!” she complained. “It’s Raksha Bandhan, auntie,” I mumbled. “But this is a bandhan too!” she guffawed in triumph.

I frequently encounter variations of this elegant theme. “Don’t you feel tired in a sari? Isn’t it too much work? Isn’t too hot?” This last one is perhaps the most absurd, because I’d be hard-pressed to think of anything more ventilated than a sari. No, perhaps what Auntie next door and other people are thinking of is the good behaviour and high dignity they think must be accessories to wearing a sari. A sari is like the younger brother who tags along and will tell Mummy what you are up to.

I’d like to blame the State or someone equally handy for the anti-sari propaganda. For making us associate the sari with the painted ladies who appear in signs reserving seats in public transportation, with the “wise lady doctors” of advertising, with the gold-ballasted brides of jewellery shop hoardings. For not remembering your aunt who leaped over the college gates in a Chettinad cotton, the photograph of your ikat-draped aunt driving her first scooter, your China silk-crumpled mother who decided to climb the roof and adjust the antenna. For not remembering the efforts of Bollywood in promoting the sexy sari (even if it is sometimes just an unfortunate evening gown clone).

Perhaps we should just plaster the city with prints of Pablo and Richard Bartholomew’s unforgettable photographs of Louche Young Things in saris. Because sure we are killing the sari with our textile policy but we are killing it faster with dignity.

A version of this was published previously in Timeout Delhi. Image credit: Vriksh Designs.

How Can One Piece of Cloth Mean So Much? 11 Sentimental Glimpses of the Sari

Mr Sabyasachi Mukherjee, We Like Our Clothing Non-Judgemental, Thanks