HomeWatchlistCinemaPeeps who were scared that the new Mad Max had rui ...
June 26, 2015

Rejoice, subscribers of Return of Kings and the like. The fears that action movie lovers were now relegated to suffering sensitive men and violent feminists on screen were brought on by an entirely false alarm. If you don’t believe me, watch Jurassic World. Quite simply put – the anti-Mad Max: Fury Road.

(So many spoilers ahead.) 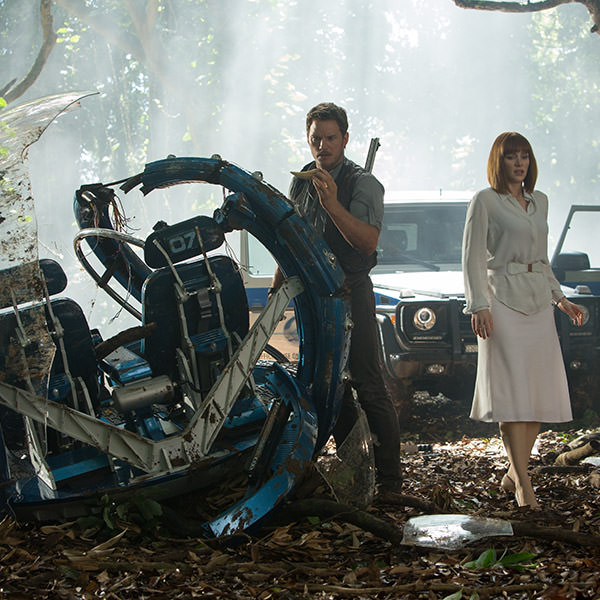 Let’s leave the possibility that the screenplay for the film was written by an algorithm aside for the moment, and talk lead characters. While in MMFR the audience were introduced to the protagonists straight up, sans introductions or back stories (unless of course you were a fan of the franchise), in JW we get to prejudge them through two eyerolls – calls to Claire (Bryce Dallas Howard) from her sister go straight to voicemail, you know, because she’s so busy WORKING, and we aren’t surprised when we see Claire for the first time – dressed in white, straighter-than-straight hair, giving herself a weird pep talk. Claire’s eyes roll when Owen (Chris Pratt) is mentioned – an ex-Navy-turned-dinosaur-trainer (aww), and despite her obvious dislike she has to go rope him in to evaluate some sociopathic dinosaur hybrid, resulting in the best possible material for demonstrating sexual harassment at the workplace *drum roll*.

Of course, some of the worst dialogue written in recent times helps this along:

Claire: “We have an attraction.” (Referring to the dinosaur hybrid, because apparently people really do talk like that.)

Owen: “That’s not what you said that last time I saw you.”

I was cringing in my seat while listening to Owen make references to this one date that they went on, gone bad (because Claire is a clinical control freak). When she says that they need to have a discussion he suggestively asks whether it should be in his b-u-n-g-a-l-o-w, and more unnecessarily innuendo-based responses. I tweeted about the scene in the interval and received this response:

“it was a casual exchange between two people who may have previously alluded to consensual sex. He wasn’t making advances..”

Move over, tough yet empathetic heroines of the post-apocalypse. Cliniclaire does not believe that dinosaurs are real – she refers to them as assets, acquisitions, things – but Owen, he has a real connection: he’s the damn Alpha to a pack of ’craptors. Cliniclaire refuses to shut down the park despite there being a killer on the loose because of – wait for it – potential financial losses. In her conversation with Irrfan Khan’s “I believe I can fly” Mr Masrani, his zen-like questions on people’s happiness are answered in terms of statistical analysis. In her conversation with her sister, it’s established that she isn’t family-shamily types. That conversation might just help the film pass the Bechdel test. Even a dying brontosaurus has the energy to snap at her awkward petting. The only other woman that Cliniclaire interacts with is Zara (Katie McGrath), her even-more-clinical British assistant, to whom she delegates ‘caring’ for her nephews (which everyone has a problem with, especially the judgmental little kids). Zara is most notable for an extended death sequence involving being flung between flying dinosaurs and finally being eaten by the underwatersaur who eats what was eating her… you get the idea.

Of course, Cliniclaire has character development through the film. Notably, her white dress goes from pristine buttoned-up to a purple vest and split miniskirt (Owen voiced my own confusion when he reacted perplexedly to her undressing for action) – shout out to those heels that lasted the entire film (HA, Owen, proved you wrong, didn’t she?) and whatever amazing bra she was wearing. Cliniclaire starts emotionally unraveling the moment she gets V-J day in Times Square-d by Owen, straight hair into frizzles and all.

Everybody loves Owen – good guys, bad guys, dinosaurs. There is no handing over of any rifles for a headshot here. Owen is in charge. How do I know? He says so. Owen indulges in a healthy dose of mansplaining on how Cliniclaire should be doing her job, but to be fair to him, she’s doing a pretty terrible job of it. Mostly because she doesn’t think that it’s important to ensure that your new deadly genetically modified killing machine – apparently developed to respond to the reaction of ‘focus groups’, bored of plain ol’ dinosaurs – is socialized enough to not want to decimate everything in sight, this providing an awkward answer to this film’s version of “Who killed the world?”. Owen the dinosaur whisperer foresees things going wrong with everyone’s plans right from the start, but for some reason, he thinks that his relationship with Cliniclaire will work. I’m not saying that every female protagonist needs to be an Imperator Furiosa, but I’d like to not be screaming variations of “OMG OWEN WHAT IS WRONG WITH YOU” at the resolution of the romantic conflict in the screenplay.

Owen is THE MAN, but even he cannot solve all their problems. Which is why Cliniclaire eventually saves the day by releasing the T-Rex to tag-team with the other dinosaurs and end it all. It is an act that takes tremendous courage on her part, but then in the end when we see the unfettered T-Rex roaring in the wilderness, we can’t help rolling our eyes at Claire as she walks off into the sunset.

Amba Salelkar is an avid watcher of films thanks to Tamil Nadu’s Rs 120 cap on ticket prices. In her spare time, she works as a legal consultant specializing in disability law and policy.

Not Sure What Happened in Minnesota? ‘He was Just Black in the Wrong Place’

2 Responses to “Peeps who were scared that the new Mad Max had ruined action movies, never fear. Jurassic World is here”