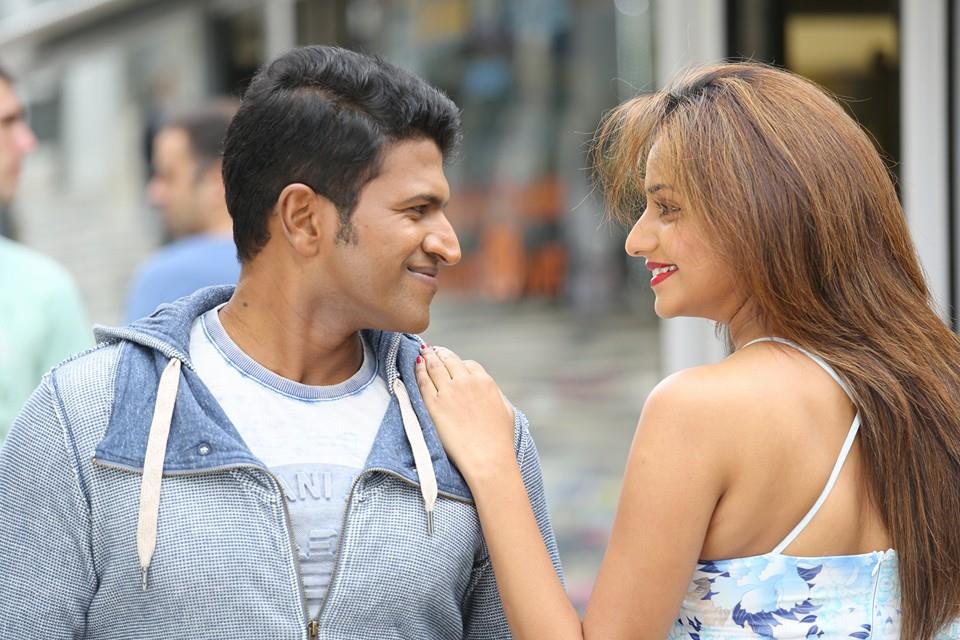 You know that flavor of ice cream that you really liked at one point, say Pista, but then you stopped liking it because somebody went and discovered Swensen’s? And then one day Swensen’s is closed so you go and eat Pista again and just feel happy that it is still there? Because it reminded you of something you no longer care for but liked to eat. I don’t know who Swensen’s is in this analogy but watching Power star Puneeth Rajkumar’s latest Chakravyuha was like eating Pista ice cream after a long time.

If you haven’t watched any of his movies since Milana or ever, you will wonder what is making you notice him now. When I asked myself that same question, I realized I grew to like him quite a bit in two and a half hours, especially after the man sitting next to me whispered to his friend that Puneeth Rajkumar himself sang Yenaithu – a song from Chakravyuha that he sings along with Kajal Aggarwal. A song I have been humming since yesterday.

If you haven’t watched a Kannada movie where most events happen in malls, basements and car parking terraces — you should begin with Chakravyuha. In Mungaru Male, we saw Ganesh fall quite literally in love and into a gutter in front of Eva Mall. In Chakravyuha, there is more than just love and break ups in mall basements — there are fights, dialogues, declarations, promises, and an epic scarecrow rescue scene.

Many reviews will tell you that Chakravyuha is the story of a common man’s (Puneeth Rajkumar) fight against a corrupt government and his quest to save his people from injustice.

But Chakravyuha is also the story of two brothers – thug Law Minister and his thug little brother (played by Abhimanyu Singh and Arun Vijay) and their mad love for each other. The Law Minister is seething after his demand (more seats to be filled with his goons) was rejected. He sets his brother (Arun Vijay) to lock and beat up students in the Law College leading to the death of 3 students. As a result, the thug brother is kidnapped and locked in an abandoned building by Puneeth Rajkumar. And the Law minister goes to jail so his brother can escape.

All this would have been ok, I guess. Brothers showing love is normal no matter how many people they kill. It’s just weird that their anna-thamma sentiment is a better love story than the hero-heroine’s. 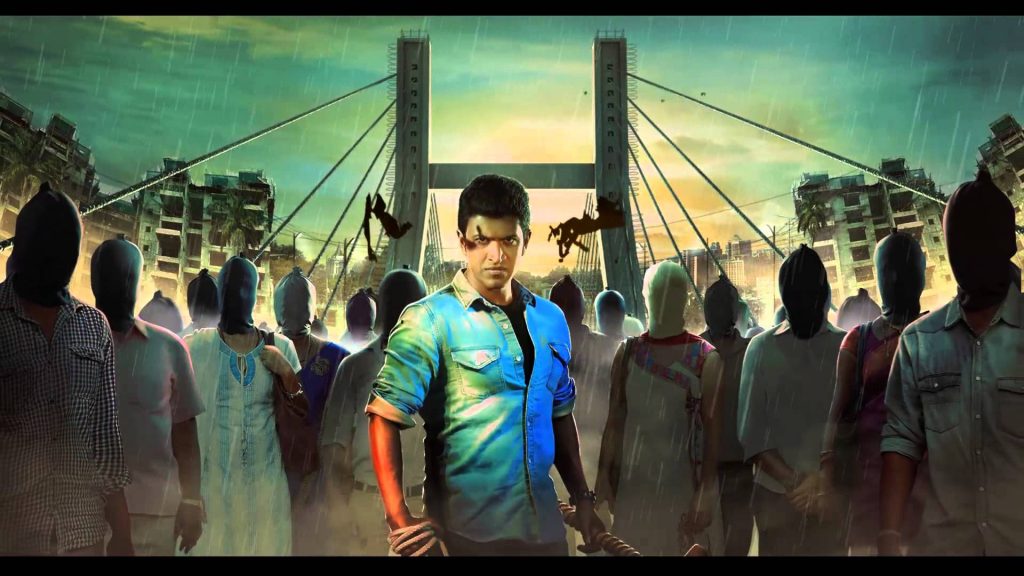 Puneeth Rajkumar is an engineer called Lohith (also his real birth name) and Anjali (Rachita Ram) is gaga for him. Lohith has no time for love because ‘he is a common man against injustice’.

In the viral video Shit Bangaloreans Say – a man walks up to a couple canoodling in a park and chases them away – all the while cursing them, saying with disgust lav anthe lavvu (Love it seems!)

There’s a certain oomph to this lav anthe lavvu. In a Kannada home, elders can say it to anybody of any age. You can be 18 and caught in an ‘lavvu maadtaidini’ (I am doing love) situation or 40, Lavvu anthe lavvu at any given age will mean: don’t you have better things to do, why are you so worried about yourself, you still have time, your parents will decide, go home and sit.

It is the Kannada hero’s ultimate right to say Lav anthe Lavvu when the heroine professes undying love for him. It is also his ultimate gentlemanly gesture to reject her naanu nimmuna sincere aagi louu madtaidini (I am loving you sincerely) simply because he has the authority to. Anjali is hurt after Lohith’s little spiel on love so she decides to do something I haven’t seen many common- man heroes do. She goes straight to the villains in an attempt to save him. The villains have been looking for him, something only she knows.

Anjali is portrayed as not bright at all. In one scene, Anjali is sitting in the Law Minister’s car, eating tandoori chicken and wondering why he and his goons are after Lohith and why the Law College has been in the news so much. This is after Lohith has forcibly made her donate blood to one of the Law College victims.

While some reviews are hell bent on seeing the ‘equal space’ given to both the heroine Rachita and villain Arun Vijay, the only clue we have as far as her role is concerned is the student id card around her neck that Lohith pulls in one scene. We could guess that she is a student but what we know for sure is that her blood group is O negative. (Despite the many Pista moments, the film was a Bechdel fail because even when Anjali bonds with Lohith’s mother over a conversation about coffee and selfies, we don’t know what amma-in-law’s name is.)

Although the film is a remake of the director’s Tamil original Ivan Veramathiri, Chakravyuha was better perhaps because of lav anthe lavvu.

This was the defining pista moment for me. In Ivan Veramathiri, the hero has to rescue the heroine from atop a building where she is tied to a scarecrow and left to hang outside. At one point a crow comes and sits on her hand and she shares her tension with it. In Chakravyuha, there is no crow but it was amusing to see Lohith go from lav anthe lavvu to naan barta idini Anjali (I am coming Anjali)