Tuesday saw a landmark judgement by the Supreme Court, which struck down Section 66A of the Information Technology Act after a petition that challenged it. Section 66A, which allows a person to be arrested and kept in jail for upto three years for online communication that is “grossly offensive”, has a “menacing character”, or causes “inconvenience or annoyance”, was found to be unconstitutional by the Supreme Court.

When 19-year-olds Shaheen Dhada and Rinu Srinivasan were arrested in Palghar near Mumbai on November 19 – Dhada for a comment on Facebook on the bandh that followed after Bal Thackeray’s death and Srinivasan for ‘liking’ it, a 21-year-old girl in Delhi named Shreya Singhal decided to do something about it. Singhal had just finished studying astrophyics at Bristol in the UK, and was contemplating studying law. And she’d noted that while Dhada and Srinivasan were charged under 66A, they hadn’t been the first of its victims. Earlier that year, arrests under 66A had taken place in other parts of the country– in April, when a Kolkata professor shared a political cartoon on Mamata Banerjee in a forwarded email; in September, when a Mumbai cartoonist displayed a cartoon that was critical of the government, and in October, when a businessman in Pondicherry tweeted in October 2012 about P Chidambaram’s son.

After the Palghar arrests, an outraged Singhal argued with her mother (Manali Singhal, a Supreme Court lawyer), who encouraged her to take action. The same month, in November 2012, Singhal filed a petition in the Supreme Court with the help of renowned lawyers to strike down Section 66A. The rest, friends, is history.

The victory is, of course, the result of a great deal of work by several parties. The case included several other petitions from NGOs like Common Cause, rights groups like People’s Union for Civil Liberties and individuals like Rajeev Chandrashekhar and Taslima Nasrin, and was fought by lawyers such as Karuna Nundy, Apar Gupta and Mishi Choudhary. They also challenged Section 69A, which authorises the government to block websites, and Section 79, which deals with online “intermediaries” such as social media platforms having to “take down” illegal speech that they host. The Supreme Court upheld 69A and 79A, but limited the latter’s scope. There’s still work to be done, but Tuesday’s verdict is a major step, nevertheless.

We spoke to Shreya, who is currently a second-year LLB student at Delhi University, over the phone to ask her more about the crazy journey it took to challenge the law. Here’s what the 24-year-old had to say. 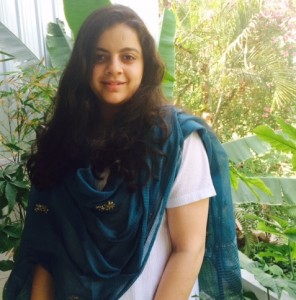 – First, congratulations on this morning’s verdict! What has your day been like so far?

Thanks! It’s been quite hectic. We got to court by 10 this morning, and we were out by 11. Since then it’s been frantic with endless interviews – phone calls, and people coming home with OB vans. But it’s pretty amazing – the Supreme Court shot down the entire section of the law, which is what we prayed for in our petition. We weren’t sure of what the verdict would be this morning, but in 2012, when we filed the petition, Justice Altamas Kabir [former Chief Justice of India] remarked that he was surprised no one had challenged Section 66A before, so we did know that the Supreme Court thought this law was being misused. It’s amazing that the Supreme Court felt the same way that we did – I’m overjoyed.

– When Shaheen Dhada and Rinu Shrinivasan were arrested in 2012 for their posts on Facebook, what was your reaction? Did the decision to file a petition challenging 66A arise solely in response to their arrest? Are you in touch with the two girls?

Shaheen Dhada and Rinu Shrinivasan were arrested in Palghar, and they were younger [than me]. Like in the other cases, the things they’d said were most innocuous – someone might be offended, but you don’t arrest people for that! A law was being misused publicly, but it didn’t stop there – earlier there was the businessman from Pondicherry who was arrested, and the professor in Kolkata who shared a cartoon…it was combination of all of these that drove me to file the petition. I spoke to Rinu this morning before the verdict was announced. But we didn’t do this on behalf of any of the people who were arrested in particular – it was for everyone who uses the Internet.

It was ordinary people who were being affected under the law – 66A uses vague words like “annoyance” and “menacing”. Next they could have arrested me, or my friends. If this law was applied to everyone, half of the country’s population would be in jail, by this logic.

– You got to actually witness the process of challenging a law. What was that like? Any memorable people on this journey that you’d like to work with again?

Oh definitely. Ninad Laud and Ranjeeta Rohatgi drafted the petition, and Uncle Soli [Sorabjee] argued the case for three days. The case started in 2012 and for a year and half it seemed like nothing was happening, but that’s just the judicial process. Less than a month ago we finished our final arguments and then this morning was the verdict – it was done very quickly. Politics and law had been in our conversations at home [Singhal’s mother isn’t the only lawyer in the family – her grandmother, the late Sunanda Bhandare, was a judge], and until we challenged 66A I had only heard of their experiences in court and in Parliament. Here, I got a chance to see it first hand. Later, other groups like PUCL joined, but they were also looking at 69A and 79. My focus was on 66A.

– What next? Having successfully petitioned to challenge a law, do you have your sights set on any other laws that could do with some wearing down?

I just want to finish college now – I have one and a half years left to go. I felt very strongly about this [66A] and so I did it. Who knows what the future holds. But I don’t think I’m going to make a habit of filing PILs.