Are you an Indian who lives far away from Kashmir, like I do? Have you only just truly woken up to Kashmir this year, as I have? What woke you up? Was it the demonstrations against Afzal Guru’s execution that were held at Jawaharlal Nehru University (JNU) on February 9, and the spiral of controversies proceeding from that day?

I was quite unforgivably clueless about Kashmir. I knew it was a place of great danger, and I was vaguely aware that not every Kashmiri wanted to be Indian. Then, after February 9, I started following the news a bit more. I looked up Afzal Guru on Wikipedia. But I still didn’t understand much. I knew that the BJP was trying to form the state government with the People’s Democratic Party (PDP) in Kashmir, who thought that Afzal Guru’s execution was unjust. Unsurprisingly, this just confused me further.

That’s when a new book from Zubaan helped me ask the right questions. February 23rd is Kashmiri Women’s Resistance Day. It is the anniversary of Kunan-Poshpora, an incident that took place in 1991: two villages called Kunan and Poshpora, in the Kupwara district of J&K, were reportedly raided by the Indian Army, dozens of women raped, dozens of men tortured. The ‘reason’? The soldiers were searching for militants. The entire case was hushed up and the investigation nipped in the bud.

However, in 2013, 50 Kashmiri women filed a Public Interest Litigation (PIL) petition to reopen the case. In the book Do You Remember Kunan Poshpora?, five of those women – Essar Batool, Ifrah Butt, Samreena Mushtaq, Munaza Rashid, Natasha Rather – have written about their respective personal connections to Kunan-Poshpora, their efforts to document, litigate, and mobilize the case, and through it all to convey a vivid picture of what it means to be a Kashmiri, what it means to be a Kashmiri woman, and most of all, what rape means to a Kashmiri woman. 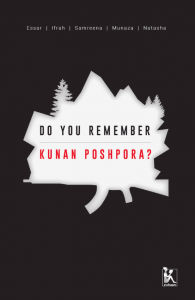 There are many ways in which a beginner to Kashmir can slice this subject. There’s the question of truth, lies, investigation and discovery– and how labyrinthine that process is in a court of law. There’s the matter of justice – the progress of the 2013 PIL, and whether it is being pursued purely to seek justice, or whether, if there is little hope of justice in an Indian court, it is also being pursued to officially register the protest against Kunan-Poshpora and pursue an inquiry as far as possible. There’s the extensive documentation in the book – individual victims’ accounts of the incident, maps of the scenes, a list of the soldiers involved, the investigation and the burial thereof, the FIRs, the medical reports, the police reports.

There are also the quick, efficient personal accounts by the co-authors at the beginning of the book, which clarify why azaadi from India is important for some Kashmiris. They paint a picture of silenced fear and anger, of soldiers everywhere, men with guns whose perpetration of torture, murder and rape has become normalized – to the extent that one hears of a torture-related death in the neighbourhood and then goes off to a wedding, because if one sat up and took notice of every death, there would be no weddings. Each co-author describes how she personally broke through the propaganda of ‘the soldiers are here to protect us’, and how it became harder for her to be silent than to speak up and risk her safety.

Like every other citizen of any country, I am no stranger to propaganda. I’ve managed to unlearn most of the jingoistic patriotism I was taught in school – I want to learn to love the country’s people, rather than the concept of a country. But I can only unlearn at an intellectual and emotional level. Deep down, my body is still indoctrinated. I am deeply disturbed by how I develop goose bumps every time I hear the national anthem. I know it comes straight from primary school and that I can never change it. So yes, it’s difficult for our bodies, hearts and minds to accommodate a different picture of India from what we’ve known all these years.

But over these last few weeks it’s also become clear to me that this task must be performed by all of us whose ideas of India are not flexible enough. Despite the evidence, the army accused the victims of Kunan-Poshpora of lying through their teeth. Similarly, some readers may be tempted to dismiss this new book because it doesn’t tell the ‘correct’ story about India that they want to hear. To them I say: meet Kunan-Poshpora halfway, at the very least.

One of the many events that followed the Afzal Guru protest on February 10 happened a few weeks ago, when the media pounced on a statement by JNU professor Nivedita Menon:

“Everyone knows that India is illegally occupying Kashmir. Everybody accepts [it] […] The map of India in foreign publications like Time and Newsweek show a different map of Kashmir. These copies of the magazines always create a lot of controversy and are censored and destroyed. When the whole world is talking about India’s illegal occupation of Kashmir, then we should think the pro-azaadi slogans in the valley are justified.”

After reading about Kunan Poshpora, Menon’s statement seems like a case of the Emperor’s New Clothes to me. Everyone is telling us the Emperor is wearing clothes – our friends, our family, the media, the government. All of us are looking at the same thing. Some of us convince ourselves that we can see clothes. But many of us also don’t see them. So why do so few of us actually say this out aloud? What do you see when you think of Kashmir?

6 Responses to “JNU Protests, Afzal Guru’s Hanging, Kunan-Poshpora Rapes: None of Us Know the Real Kashmir”