After all these years people are still expending energy wondering how Serena Williams’ blazing career would have tanked if she had played against men.

In an interview with NPR on Sunday, the former tennis champion John McEnroe held forth about how Serena was the greatest female tennis player of all time — a caveat that she has railed against in the past. According to McEnroe, though, “if she played the men’s circuit she’d be like 700 in the world”.

After he was badgered to explain what he meant, McEnroe only got himself into more of a hole. He meanders from saying that his kids don’t believe that he could beat Serena anymore to explaining how he is still a staunch feminist, to talking about how Serena has incredible mental strength and is a fantastic player who could possibly beat some male players.

He also jokes, “Maybe I should get her now because she’s pregnant”, and in a random aside, clarifies “I suppose anything’s possible at some stage” when asked about whether he thinks women are incapable of defeating men on the circuit. Maybe he’s thinking of a world where people don’t feel the need to comment on Serena’s nipples. (Incidentally, in 1973 when the female tennis player Billie Jean King beat a former no. 1 player Bobby Riggs, the broadcaster suggested how she could make herself even more attractive: “If she ever let her hair grow down to her shoulders and took her glasses off, you’d have somebody vying for a Hollywood screen kiss.”)

Having won 23 grand slam titles probably gives you more than a little leverage, but Serena was calm and shut McEnroe down politely enough, essentially saying she didn’t have time to spend over his speculation about how low on the ranks she would score. 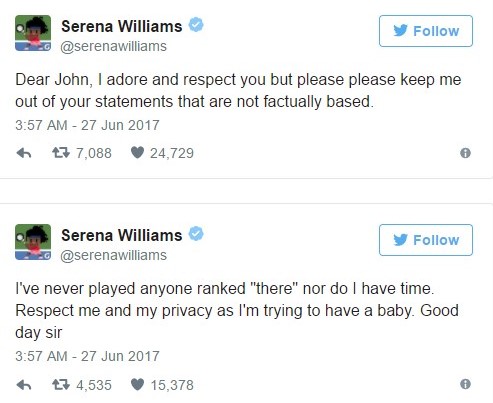 We’re Declaring the State of Goa and Super Fast Train Seats Sacred for Women. It is God’s Will

How Roger Federer Made Me a Mature Tennis Fan

One Response to “After Everything She’s Achieved, Some Men Are Still Obsessed with Defeating Serena Williams”