HomeBooksTeesta Setalvad’s Memoir Takes You to the Beginnin ...
January 20, 2017

“Your wife’s fate is to chakki pisaon (grind at the mill) in prison. Watch out and beware,” goes a recurring warning hurled at Javed Anand, husband of civil rights activist and journalist Teesta Setalvad, over the phone by a hostile stranger. And it’s just a fraction of the vitriol unleashed on Setalvad, much of which is captured in her new book Foot Soldier of the Constitution: A Memoir, a chronicle of her work as a civil rights activist and journalist over more than three decades. In it, she reveals what it’s been like to be at the receiving end of constant attacks and an enormous amount of suspicion from the Indian state and public, and traces how her memories of reporting on communal violence in the country shaped her career. 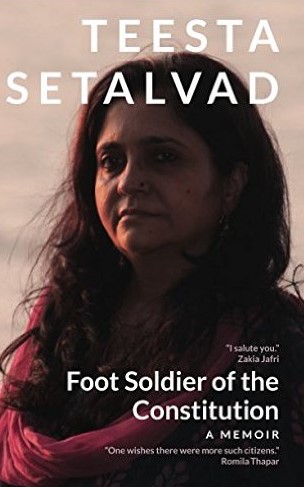 Setalvad singles out the Bhiwandi massacre of 1984 in Mumbai (which saw 26 people being burnt to death in Ansari Bagh) as a formative event which she credits with bringing clarity to her as a journalist, “shaping me professionally and allowing me to prioritise my concerns”. This was primarily because it was the first time she witnessed intense violence up close, when Cheetah Camp, a makeshift resettlement colony in Gowandi, was targeted by the police: “I was present when the arm of a poor Muslim man was chopped off; the vision of it dangling is a bruised — if faded — memory”, Setalvad recalls. Incidentally, it was also around this time that she met her future partner Javed Anand, and their attempt at digesting the unravelling of communal violence together is poignant and reminiscent of a far more personally involved attitude to reportage: “Every evening, after being bruised and battered while on this coverage and submitting our ‘copy’, Javed and I would meet to exchange notes and share the burden of this personally witnessed brutality.”

Setalvad’s narration at times adopts a somewhat self-righteous tone when she details her assistance in fighting for justice for the victims. But these hideous incidents, which she investigated, form the backbone of her exploration into growing anti-Muslim sentiment in the country.

Covering another vicious spate of anti-Muslim riots in Mumbai that were orchestrated by the RSS and Shiv Sena in the aftermath of the Babri Masjid demolition, in particular, nudged Setalvad away from journalism and into activism, where she sought a direct pursuit of justice for victims of violence. A large portion of the book is preoccupied with reflecting on this shift, and how the limitations of mainstream media — which did not provide the space for a chronological coverage of events leading up to violent clashes but instead ‘…seemed circumscribed by and limited to coverage of the sensational violence during the conflict’ — led her to break out on her own.

And the journey she undertook afterwards, from co-founding her own organisation, Sabrang Communications and launching the magazine Communalism Combat, to carrying out in-depth first-hand investigations of unfolding communal tensions across Gujarat, is an absorbing portrayal of the grim groundwork that prepared her for swift action during the 2002 Godhra riots. While she speaks only fleetingly of the impact of this on her personal life — haunting nightmares of graveyards, the anxiety it caused for her family and being unable to see her young children for long periods in 2002 — the book focusses more on the effect on her as a public figure.

Setalvad’s endeavours to hold Modi’s state government in Gujarat accountable for payments for relief camps certainly haven’t managed to leave her unscathed. Her memoir details her tussles with the general public, and state and central governments, which include her car being stoned, criminal cases in 2004 for kidnapping and tutoring witnesses, and accusations in 2014 of embezzling funds meant for Godhra survivors. And according to her, the induction of the present government has only heightened the animosity. Although the UPA government was hardly forthcoming in its fight for justice for genocide survivors, according to Setalvad, there is a palpable shift since 2014: “The difference between a government indifferent to reparations and justice and one that is actively protecting the perpetrators, became sharp.”

But the book also has moments of optimism. “What has this legal struggle gained us?” Setalvad asks, while reflecting on her involvement in legal battles like the Zakia Jafri case, and her answers are convincing: She reminds you of a 2009 amendment to the Code of Criminal Procedure (CRPC), which gave complainants the ‘statutory right to intervene in criminal trials to assist the prosecution’, and the fact that more than 570 eyewitnesses and victims of communal violence have been provided with paramilitary protection after 2004. And she is a person well acquainted with the slim silver linings of long-drawn legal battles: Perhaps some of the most intriguing parts of her memoir detail the ubiquitous presence of lawyers in her family, not least her paternal grandfather (the first attorney general of India) MC Setalvad’s amusing anecdotes about cross-examining the butcher of Jallianwala Bagh, General Reginald Dyer.

Setalvad’s chronicles of interactions with real people — the women victims of Naroda in the Shah Alam camp in Ahmedabad, for instance — are brief and lack the sense of detail and texture she brings to discussions of the events themselves. The same goes for the somewhat tired truisms and rhetorical questions with which the book ends: “Can we build an India with foot-soldiers of peace, harmony and justice in every mohalla and street? Can we reclaim this public space as our own? A space that belongs to the Constitutionally-created Indian republic?”

However, the strength of Setalvad’s memoir lies in her skill of pointing out small but crucial details of the massacre which were apparently overlooked by the Special Investigation Team probing the Gujarat violence — packets of a white chemical substance used by the mob, and the LPG gas shortage in Ahmedabad because gas cylinders were deployed by attackers in Naroda and Gulberg. It is these all but forgotten aspects of the riot that go some way in capturing a crucial era of Indian history, and it’s through them that Setalvad shows us how violence has marred and vitiated the country she grew up in.

Whose Great Idea Was it to Publish Soha Ali Khan’s Memoir?

Who Won the Gujarat Election? Hint: It Wasn’t Women