HomeSportsSportsNot Even Snow Can Stop These Afghan Women from Pra ...
February 6, 2017 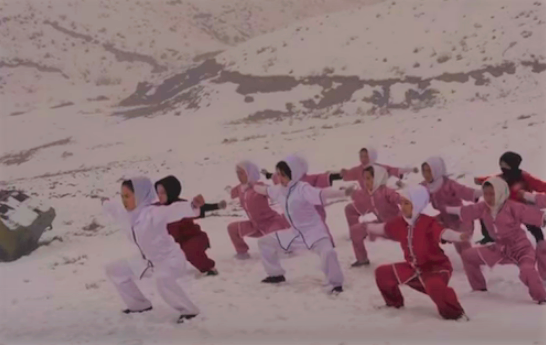 Sima Azimi, a 20 year old Hazara woman from Kabul, Afghanistan, is determined to teach her students this form of Shaolin kung-fu despite the odds, be they societal or the meteorological. When she isn’t training them on icy mountain tops, it’s in a grungy club financed by a film actor. She sourced a Shaolin sword from Iran, and Shaolin uniforms from a tailor in Kabul. Azimi emerged the top female contender in a kung-fu competition organised by the National Olympic Committee of Afghanistan in Kabul, and has won medals in kung-fu competitions in Iran.

The group is practising for the day when finances permit them to be sent to international tournaments as the Afghanistan women’s wushu team. Azimi also says that learning martial arts helps them defend themselves against street harassment and criminals.

Watch them in action here:

How Can You Not Be Mesmerised by this Graffiti Artist Covering Kabul in Feminist Art?