HomeNewsSupport Her To The End
November 27, 2013 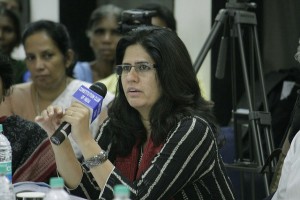 Friends and others have critically commented on the tone and content of my interventions on the Tehelka sexual assault/ rape complaint in 2 news channels – NDTV and CNN IBN on 21st November 2013. This evening I was told that a young woman lawyer even called up a TV news anchor to say that my position was compromised because of the cast of characters involved. I wish she had called me instead so that we could have debated the issue. Anyways I will email her as I see this as a matter of feminist discussion.

48 hours ago I took the view that as the complainant woman journalist was still figuring out how she wanted to proceed further, I will wait patiently to hear what her next decision would be. Yes, her allegations make out a case of rape by a person in a position of trust and constitutes an offence under Sec 376 (2) IPC. Yes, it is the legal obligation of the employer that the police is informed of the complaint. Yes, it is the statutory duty of the police to lodge a FIR if they receive information about a cognisable offence.

Yet, I believe and said that I will not screech on TV for her to rush to press for criminal investigation and prosecution. I will respect the autonomy of the woman and her agency to take the decision. If she needs 24-48 hours to do that, I will stand by her assuring her full support and solidarity, long after the TV cameras have moved away. In my view the criminal prosecution route is not superior to, or more valid or more legitimate, than other ways of seeking accountability. Breaking the silence and charging the top boss, Tarun Tejpal, with rape, is the biggest challenge to impunity. And I applaud her for her courage and strength. The woman journalist is not a ‘victim’, she is capable of taking decisions.

I engage with law making processes and law reform, so that law may enable women to have greater control over their lives, which necessarily entails that violence must diminish. Not for law to overtake my life. As a feminist lawyer, I have supported many survivors of sexual violence. They have made diverse choices within and outside the framework of law, to address the violence that they have suffered. I respect them all, even those who refused to lodge a FIR. Where intimidation, coercion, or power dissuades them from prosecuting the accused, I see it as our role to weigh in on her side and create access for her. There are, however, women who find other form of closure and resolution. Retributive justice does not appeal to all survivors of violence. Everyone does not find closure in war. (Check out the interview of the woman journalist’s friend and colleague, Revati Laul to NDTV at 7pm, on 23rd November, where she explains how and why the woman journalist complainant deliberated and decided.)

Now that the woman journalist has decided to join the police investigation, let’s support her till the end. Which involves not abandoning her when some other incident/issue strikes our lives. Trials take long, very long, and each hearing is not sexy enough to attract prime time news. As a lawyer, I am left holding on to cases and people long after the media and even the activists have moved on and away.

Unfortunately, it appears that the yardstick of being politically correct is being laid down by hysterical and righteous sounding news anchors. Their holier than thou attitude is so fraudulent and fake.

How come none of these news channels have ever said that there cannot be another version to – Soni Sori’s custodial sexual torture by Ankit Garg in Chhattisgarh; or T. Manorma’s rape and murder by Assam Rifles in Manipur; or the mass rapes by the Army in Kunan and Poshpara villages of Kashmir. In each of these cases the other version was presented by the Indian State, hence the woman/ women’s statement has no value or credibility. The State stumps the woman.

Surely feminist practice and jurisprudence will find its own path and not be beaten down by the TV news rooms or even those who have lost their ability to imagine ‘justice’.

Vrinda Grover is a human rights lawyer and advocate for women’s rights. In 2013 Time magazine named her one of the 100 most influential people in the world.