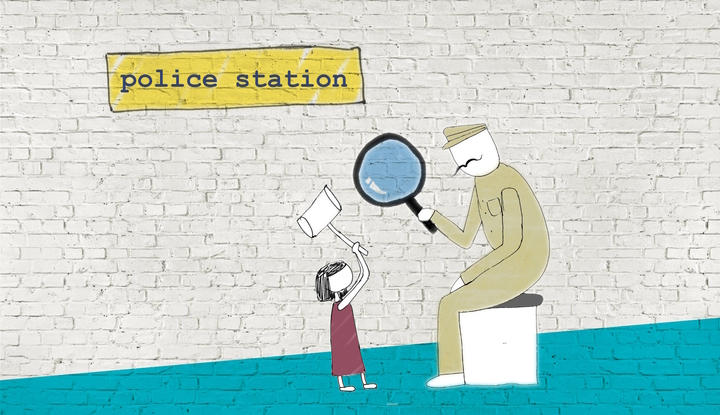 We grew up together, so we had been friends for 11 years by then. He left town in the 8th grade and when he came back, we decided to catch up. He invited me over to his home. His mum was around, so the three of us sat down together and had lunch.

After some time his mum decided to leave for the parlour, so Karan* and I headed to the living room to watch some TV together. That’s when things started to get inappropriate. He started to force himself on me. This went on for about half an hour.

Luckily a phone rang at some point and he left to go attend to it. I took this opportunity to run away from the apartment. I was glad I’d gotten away from him.

For the rest of the day I could not think straight. Karan tried to get in touch with me an hour and a half after the incident with a text message saying that he was sorry and he did not know what kind of animal instinct had gotten hold of him and that he wouldn’t do it again.

The next day I gathered my courage and spoke to Kanika*, who is one of the closest friends I have, about the incident. She suggested that we go to the police station to report it. The Delhi December 2012 rape case had occurred just a few months ago, so both of us felt more confident about reporting the incident.

We arrived at the police station at 11am, and after we’d waited for about 40 minutes, an officer finally attended to us. He started off with standard procedure, asking me the details of my case. He made me describe the incident in great detail – when it happened, how it happened, what position we were in, and exactly what he did to me. While I was describing these things, there were moments when it got a little too much for me and I started to choke. I had no intention of reliving the moment all over again. There were policemen staring and trying to listen in on our conversation.

The policeman who was asking the questions seemed interested at first, but slowly his interest started to wane. This was made clear when he asked, “If you knew this guy, how is this a molestation case? You voluntarily went to his place, you voluntarily had lunch with him, you have known him for several years, so how is this molestation?”

I had to break it down for him that although I knew this guy, I had never imagined that he would behave in such a way. But his problem was: if it was a case of sexual abuse, there either had to be physical evidence present in order for it to be registered, or your abuser had to be a stranger, or there was an abduction by force. My story did not fit into this checklist.

“We’ll decide if any action is necessary since this is not a case of rape,” were his words to me. According to him, because it was not technically rape, nothing had happened. It was a grey area between molestation and rape, and since I was completely fine physically, no case existed. Instead, his advice to me was, since this incident involved a guy I knew, it was an issue I should resolve between our families; a domestic matter the police could have no hand in. I had not spoken to my parents about this incident and still haven’t done so till date.

After talking to him for 45 minutes, he simply looked up at me from the report he was writing, said he couldn’t register it and shut his book.

It made no sense to me that I had to sit there for almost an hour, describing something painful only because it was protocol, and then not be taken seriously at all. I felt he had only been listening to me because it was ‘his duty’, or maybe he was getting some sort of a kick out of it. He made it seem that since I personally knew the guy, it was on me that I chose to go to a boy’s house alone. It was my fault because, when I knew the mother was leaving, I should have left with her instead of choosing to stay behind. He also subtly tried to bring up whether my choice of wardrobe had played a part.

The officer treated my case with a nonchalant, casual attitude when attending to me. “Aap usko jaanthe hain, aapko patha hain wo kaisa bandha tha, tho aapki galti hain,” was his answer to my problems. I stopped expecting somebody to tell me, “Yes, it was his fault”, and instead got used to, “You shouldn’t have been there at that particular time, you shouldn’t have done this, what were you wearing that led him to do this?”

When my friend tried to interject he rebuffed her by saying, “She is talking, so let her.” She was furious with his attitude.

He dismissed us by simply saying that this was a personal matter and that we should resolve it internally.

I wish that the officer, even though he refused to file my FIR, had at least acknowledged that I was sexually harassed and not treated the incident like it was a petty neighbourly spat. He had a set of biases already formed in his head as I was telling him about my case. My friend and I had lost our temper by the end of it and realized that if it was not worth his time, it wasn’t worth ours either.

I walked out that day understanding that, in a police officer’s dictionary, sexual abuse needs to be redefined.

Every case is different and yet genuine in its own way. I wish the officers had been trained to understand that rape or molestation doesn’t come with a definite rulebook. There can be marital rape, rape within a family, molestation by people known, which is also sexual abuse. The police do not have any insight into these complexities.

I was not hoping for a brutal punishment, but at least for Karan to be pulled into a police station and told that what he did was wrong.

Karan still tries to get in touch with me once every six months or so, and he does not know that I approached the police that day.

I am still very awkward with relationships because of the incident – relationships where I am intimate with someone, or where I get into physical contact with someone, such as hugs – but I guess I am slowly getting past it. But it’s never going to leave you. I do have issues trusting people. I just wish that there was a more stringent system that took care of these things so that one gets closure, but I guess that’s what is missing – individual care given for each case.

*As told to Nadia Lewis. Shreya, Karan and Kanika’s names have been changed.

Do you have a story of wanting to report, but not having been able to yet? Or not wanting to report at all? We’re all ears. Write to us at fingerzine@gmail.com and tell us how much ever you’d like to share. We’re happy to correspond electronically or chat on the phone with you. Or you can approach Amnesty by filling in their handy FIR questionnaire or, if you prefer to be interviewed in person, you can contact Gopika Bashi, Women’s Rights Researcher & Campaigner at gopika.bashi@amnesty.org.in.