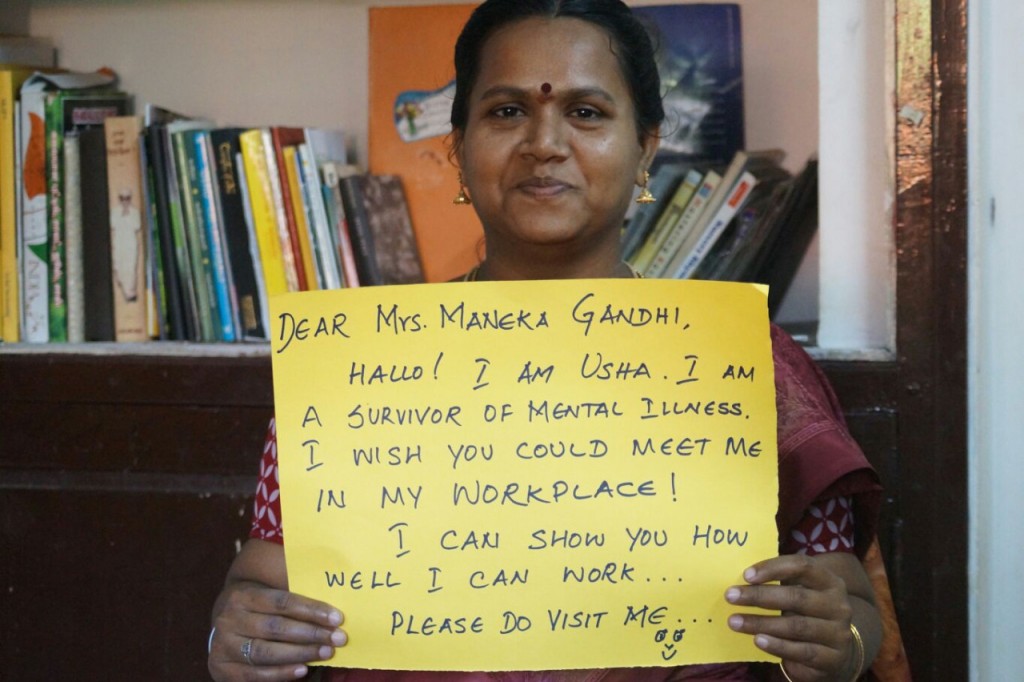 Are you disabled in any way? Do you have friends or relatives who are disabled? The answer is almost certainly yes. Do you find that you have limited access to employment? Sadly, the answer to that, too, could well be yes.

2014’s Rights of Persons with Disabilities Bill is finally moving along. Home Minister Rajnath Singh and Women and Child Development Minister Maneka Gandhi, among others, will be meeting to discuss the Bill and making recommendations to the cabinet.

One would think this would be an in-and-out, cut-and-dried set of meetings for this group of ministers. But no, Maneka Gandhi has other ideas. This week, she expressed her reservations about the Bill – to wit, that the Bill doesn’t discriminate between the mentally disabled and mentally ill. Then she said to reporters, “If a person is mentally ill like schizophrenic, how can he be given a job?”

It seems that Gandhi thinks the mentally ill cannot work, especially the schizophrenic; or perhaps she doesn’t want them in mainstream workspaces. With one phrase, she’s dismissed all the rehabilitation work and vocational training that institutions all over the country do for the schizophrenic. Take, for instance, the Schizophrenia Research Foundation (SCARF), that provides this service free of cost, or at a subsidized cost. SCARF’s work is already an uphill battle without Gandhi’s imagination of schizophrenia as the traditional picture of “madness”. And then there’s The Banyan in Chennai, a rehabilitation centre in Chennai, which aims to facilitate vocational training and financial independence for destitute women and men with mental health issues.

And that’s not all. Many NGOs and homes that work on mental health do not discriminate between the mentally disabled and the mentally ill. Sadhana Village, a residential facility near Pune, for instance, works with both kinds of residents – and who is to say that a person is either this or that? Of course, the Bill should discriminate between the two, so that each of us mentally disabled and/or ill can have tailor-made provisions for our needs. But Gandhi’s grounds for discriminating between the two – including her sharpening of the stigma around schizophrenia – amount to a revelation of bigotry, plain and simple.

In response to Gandhi’s statement, a Tumblr called WeCanWork has sprung up – putting together riveting selfies of dozens of persons with mental disability or illness, each holding up a placard telling Maneka Gandhi that he/she can work.

But this issue is bigger than Maneka Gandhi’s comments on schizophrenia. PTI reports the Bill’s provisions for the mentally ill: “In the case of a mentally ill person, the district court may award guardianship to take care of him and take all legal binding decisions on his behalf in consultation with such person.” It’s not hard to imagine oneself in this situation, forcibly institutionalised. One wonders under what conditions a court would take over control of a person – and if the Bill specifies those circumstances. But this kind of speculation would be premature. There are many basic battles to be fought first.

The Persons with Disabilities Act 1995 recognizes seven kinds of disability: blindness, low vision, leprosy-cured, hearing impairment, loco motor disability, mental retardation, and mental illness. Since then, different groups have been appealing for less vagueness and more detail and diversity in this list. Activist Merry Barua, for instance, has been lobbying for years for the mention of autism as a separate disability in the Bill, but in an interview in 2014, when activists were excited about the new Bill, she also painted a larger picture with a few examples that convey the breadth of her vision for the Disability Bill:

“There are many disabilities like hemophilia, thalassemia, learning disability, autism – all these conditions that were never there in the law, they all come in (in the proposed bill). When you are under a law, you have access to provisions and services.”

The 2014 Bill does recognize 19 types of disabilities:

(The baffling part is that mental illness and mental disability are listed separately here. So either Maneka Gandhi got it wrong, or a reporter did, or the latest version of the Bill doesn’t include mental illness as a separate category.)

But if only we were actually aiming for these things. Instead, our ministers are telling the public that the schizophrenic are not employable. This is not to say that India alone is dragging its feet on this issue; a US visa is difficult to obtain if you have a history of schizophrenia. But some outrage over our ministers’ attitudes is long overdue.

Image Credit: We Can Work