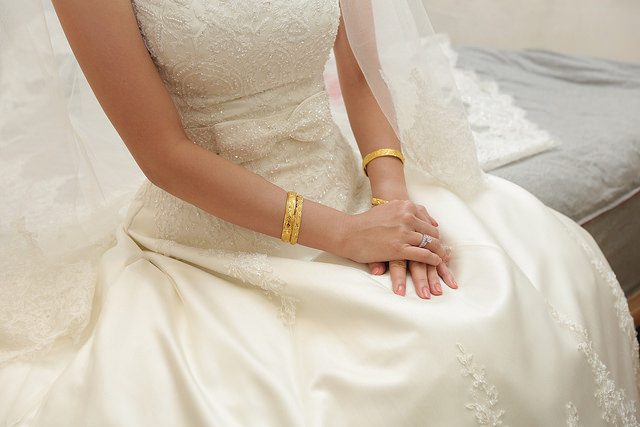 We wonder if the Kerala High Court also used the word churidar to stand in for salwar-kameez as is the practice all over Kerala. “Nice churidar” someone is likely to tell you in Pathanamthitta the way someone in Delhi might say “nice suit”. Until November 30 as far as the Sree Padmanabhaswamy temple was concerned there is no such thing as a nice churidar. Only saris, dhotis and long skirts would do.

But the High Court bench is not the only set of venerable gentlemen contemplating fashion in Kerala. Word has it that for the Syrian Christian Malayali bride, a wedding gown is no longer an available option. In an anxious attempt to uphold “propriety” and the Indian culture, many Jacobite churches in Kerala are issuing commandments on bridal wear, specially condemning the Western gown.

Recently a priest in Kerala reportedly refused to conduct a wedding ceremony, due to the bride’s gown sporting “too deep a neckline”. The bride was chastised severely, and had to abandon her expensive gown and change into a traditional saree for the ceremony to be continued, reports The Week. Moreover, many churches like the Malankara Orthodox Church in Parumala, has made it compulsory for brides to wear the saree. The church is insistent on the fact that the ruling isn’t regressive or against modernity. According to Fr. George C. Kurian, a priest that The Week quotes, “What we have told them is keep the cultural and religious sanctity in mind while choosing the wedding dress. By wearing a deep-neck or see-through gown, the bride is showing disrespect not just to the priest and the church but to Indian culture too.”

This uneasiness regarding appropriate wedding attire isn’t without its ambiguity, even within the Church community. In the past, Yuhanon Mar Meletius, a Bishop of the Malankara Orthodox Church, has responded positively to the queries of an anxious bride on his personal blog, regarding the wedding gown ruling. In 2012, according to the Bishop, “The Orthodox Church has not officially taken any decision on the dress of the bride… It all depends on the personal policy of the priest and the parish.” Even the previous year, the Bishop had been less cagey and had replied to a question about the gown on his blog much more cheerfully, “There is absolutely no rule preventing a girl from wearing a gown for her wedding. Of course the dress has to be modest and decent. As a matter of fact I conducted my cousin’s wedding on October 23rd at a village parish Church at Onakkur near Piravom and she was wearing a beautiful white gown. No one in the Church objected that. It has become common in Kerala for brides use gown as their wedding dress. I must say, it does not need to be very expensive, but beautiful and modest.” Clearly, since then the gown has taken new silhouettes.

Opinions are also strife about how the Church isn’t opposed to wedding gowns, but the possible lack of appropriateness involved. According to one optimistic bride-to-be   who spoke to The Indian Express, “The issue is not the Western gown. It is about the provocative element in a deep-cut gown. So if the bride is wearing a Western gown with decent necklines and cut, no priest would stop her.’’

According to one theologian quoted by The Week, Jacobite Church are ‘keener’ to retain their Indian identity than the Catholics in Kerala (who wear gowns without being struck down by God).

It is either a massive crisis of identity, or just another passé attempt at telling women what they can and cannot wear. Because grooms have been wearing suits in Jacobite weddings for decades without apparently causing any crisis in faith or national identity.

Image credit: Wedding by Chris Photography via Flickr/CC by 2.0

Correction: An earlier version of the post said that the Kerala High Court had banned salwar kameezes in the temple.

One Response to “Kerala Temples Hating on Churidars, Kerala Church Hating on Gowns”