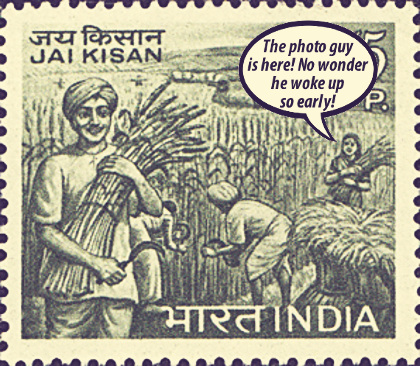 We saw this story in the Hindu Business Line and were very intrigued. “Women do 80% of farm work, own only 13% land,” it said. Earlier in the year we’d also read Nilanjana Roy’s excellent piece on gender equality and land ownership. “If you’re born a woman in India, what are the chances that you will own your own home, inherit property, kneel down on a patch of earth and think, as you let a handful of dust slip through your fingers, that this is your land? Brutally low,” she had written.

This new story from the Hindu Business Line is focussed on an Oxfam campaign called ‘A Land of Her Own’.

And here was the quote from the Oxfam campaigner Vanita Suneja that caught our eye. “The first step, Suneja said, was to recognise women as farmers at par with men.

We asked Bhavdeep Kang, a Delhi journalist of 25 years with a deep interest in agriculture, what she thought of these stats and our false stereotype of the farmer as a man.

She said “Most labour-intensive agricultural operations – sowing, weeding, harvesting, threshing, winnowing – fall to women. Okay, they don’t run agricultural machinery. But the care of cattle and handling of cattle by-products is their province. They also handle ancillary activities like vermi-composting, poultry, fisheries, repair and maintenance of habitat.

Women are increasingly taking over farming in toto because of male migration in search of work. If they can afford it, they hire labour for the more physically taxing operations. So the shortage of agricultural labour and the hike in labour costs has hit women farmers harder.

The 2005  Hindu Succession Act [which gives women equal rights to parental property through succession] is an enabler, no two opinions about that. But obviously, translating it on the ground will take a while. Andhra Pradesh has done well in giving single pattas to women (so that they can access credit and generally have more security within the family & village) and West Bengal is trying to follow suit. The 2013 Land Reforms Policy says all new land and housing allotments should be single pattas in the name of women, rather than jointly held. That’s with prospective effect. I’m not sure that is enough.”

Kang adds a terrifying thought, “Ideally, land inheritance by daughters should be mandatory, but the social fallout of that could well be negative – leading to an increase in female foeticide, for instance.

“Instead,” she suggests “it should be possible to legislate that single pattas held by men should automatically become joint pattas at the time of marriage.”