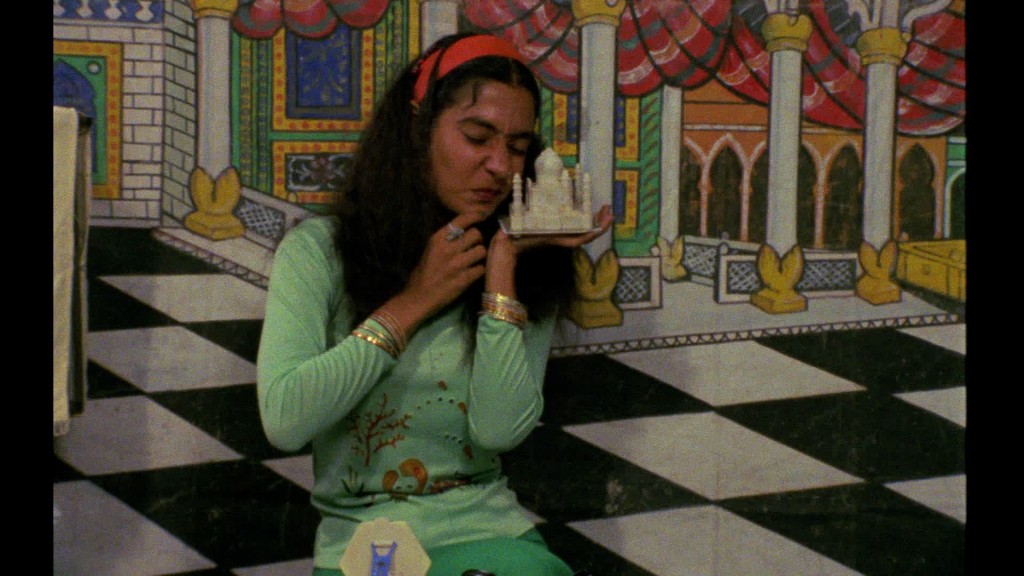 This week, Kamal Swaroop’s cult film Om Dar-B-Dar finally saw commercial release over 25 years after it was made. Have you watched the movie? No? Is there just one show in your city, 20 km from where you live? It’s fine – you can read on and pretend you’ve watched it like most people do. Perhaps I’ve not watched it either. You will never know.

Om DBD is a mad film with a handful of characters that flit in and out of its positively unhinged plot. There’s Om, a teenager with a thing for frogs, his sister Gayatri who is dating a melodramatic simpleton named Jagdish, Om’s father Babuji, an astrologer, and Phoolkumari, a runaway actress who shows up unexpectedly at their door. It’s a fantastic movie, and there are a number of great reasons you should watch it. But for me, the best reason by far is its female characters.

For starters, there’s Phoolkumari (played by Anita Kanwar), the actress from Bombay. She has an ambition that’s unstoppable. She may have signed a contract stating that she can only act in one film in her lifetime: playing the goddess of tigers. She runs away after this role and defies the wishes of her mentor by refusing to jump onto his funeral pyre. And when she leaves the house of the astrologer she consults after being accused of stealing his diamonds, she does so with a defiant, mischievous smile, hopping over the threshold and running away confident and proud in a flaming red sari, leaving her attaché behind. Later, you come across her again as she’s on the path to a different kind of fame, smiling for cameras as she plugs Promise toothpaste in an advertisement.

Then there’s Gayatri (Gopi Desai), the astrologer’s unmarried 30-year-old daughter. If the movie talks about the adolescent Om’s desire, it also peeks at Gayatri’s. In a brilliant scene, Gayatri lies down on her bed while her boyfriend Jagdish – given to melodrama and spouting inanities – drones on about airplanes, Newton and apples. She interrupts him with a seductive “Darling”. “Pehle to tum kabhi nahi kaha (you’ve never said it before)” is his reply as he falls onto her. Cut to the next scene. Gayatri’s kurta is unbuttoned behind to show her back and a white bra, while Jagdish sits nervously on the edge of the bed. After comically shuffling to the front door a couple of times with his trousers at his ankles to make sure no one comes in, he struggles too long with the drawstring of his underwear, which is in a tight knot. Gayatri cannot wait. She takes a large pair of scissors and cuts through it. Next scene. You get the feeling the sex didn’t go so well. Jagdish, now with his trousers on, sits up in bed and sobs with his head in his hands as Gayatri laughs.

Earlier in the film, Gayatri asks Jagdish whether it’s possible for a woman to climb Everest without a man’s help. But it’s not the question of a wide-eyed small town girl to a worldly-wise man. It sounds more like a test, to see whether he will pass or fail. It’s a question that links her to Phoolkumari, who is asked this by Choti, the woman from whom she seeks directions to the house of the astrologer. Choti herself appears earlier in the film when she sneakily stages an interaction with a former male classmate she has a crush on. They may have silly names and laugh theatrically at impossibly high pitches like Bollywood heroines, but Swaroop’s women are tough as Teflon.

And there’s plenty more about Swaroop’s depiction of women that is wicked. Gayatri supports Phoolkumari’s replacing of Jagdish as the astrologer’s typist. After all, she tells him, his English spellings are poor. Later, Phoolkumari and Gayatri paint their nails together as they bond over a dirty joke.

And how about the film’s stunning ending? Jagdish returns after an unexplained absence to the astrologer’s house to find Gayatri. By now, nearly all of the main male characters are dead (or possibly dead – in this film, it’s hard to tell). There’s a baby in the house. Gayatri is upset, and has shut herself in her room. Jagdish asks who the baby is. “A paying guest. Do you mind?” is her tearful response as she shuts the door on him. Later, Gayatri and Jagdish are atop a large rock against a dramatic landscape. They are here to consume poison together. Jagdish wants to go first. “Gobar (Cowdung)” he rasps before dying as Gayatri writes down his description of what potassium cyanide tastes like.

Applying something like the Bechdel Test to a movie like this is like trying to measure a river with a teaspoon (there’s enough voices that find the Bechdel Test too low a standard anyhoo, though we will keep going with our low standards).

But back to the movie – having documented this nugget of information Gayatri  abandons Jagdish to his suicide, gathers her things and climbs down from the rock. Jagdish once taught her how to ride a bicycle, but she’s clearly moved on since then; she rides off into the distance on a scooter now, her hair in a boyish bob and wearing a red sari suspiciously like the one Phoolkumari ran away in. Perhaps she’s had her revenge. Perhaps she’s rushing to see the only show of Om Dar-B-Dar in Ajmer.