HomeCultureWhy I Sing in A Lesbian/Feminist choir in Midwest ...
November 24, 2013 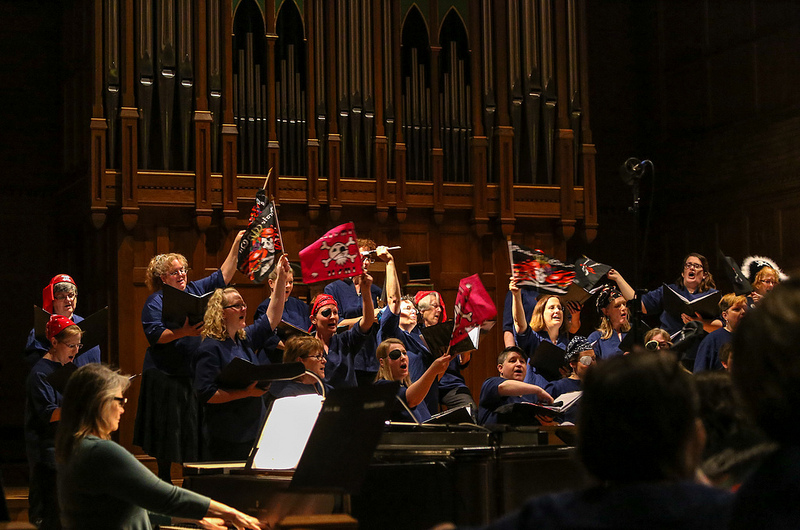 Approximately 100,000 people in the middle of the soybean fields and hog farms, Champaign-Urbana, Illinois, is a community big enough to contain interesting and challenging diversity, mostly thanks to the presence of a huge research university. But we’re small enoughthat we all know each other through just a degree or two – if we were a movie, we’d have an excellent Kevin Bacon score – encouraging a level of basic decency. Such is the environment in which Amasong, a volunteer women’s chorus focusing on music that speaks to women’s experiences, has flourished for over 20 years.

Community choruses are not rare in the United States, in part building on long traditions of group vocal music in schools and churches, but they don’t always have a subtitle like “Champaign-Urbana’s Premiere Lesbian/Feminist Chorus.” I wasn’t a member back in the founding days, but I’ve heard tales of the fraught discussions over how to punctuate that name. Both versions of love and support for women needed to be present, but precisely how would they fit together in equitable importance and without one subsuming the other? The simple stroke of the slash means that both lesbians and feminists are welcome.

Some of our members who have been in the group for most of its 20+ years imply that the group doesn’t quite have the activist vibe that it did at its inception. Singing Out, a documentary made about the ensemble, talks about founding director Kristina Boerger’s identity as political as well as artistic. But some also say that it’s hardly remarkable anymore to identify yourself as a member of a lesbian/feminist group – or a lesbian or a feminist – in most circles in town. The group’s mission of providing a safe community for lesbians and feminists to come together and make music remains the same, but figuring out exactly how to carry it out beyond rehearsals and concerts can be hard. Our music is drawn from any musical tradition we can get a score or recording from, more or less, as long as it is by, for, or about women, and about half of it isn’t in English. The nature of our group requires certain facilities (a place for 35 people to stand together and be heard) and attitudes (an audience willing to listen respectfully).

Sometime I wonder if audiences would comprehend us better if we sang only Indigo Girls and 1960s protest songs, but that isn’t our whole identity. Dr. Boerger has a PhD in choral literature and conducting and loves early western music, among many other traditions. We sing anything and everything. Tunes by Hildegard von Bingen (d. 1179) and Bobby McFerrin. Lyrics by Emily Dickinson and Rabindranath Tagore. Religious songs, work songs, cradle songs, celebratory songs. Works by famous composers and music created and developed by people whose names will never be known. Old English, Spanish, Québécois French, Norwegian, Bulgarian, Latin, Chinese, Japanese, Hebrew, Xhosa—you name it, we’ve sung in it (and Sanskrit and Kannada too).

All of this means that the classical concert hall and its related traditions of musicians in all-black formal wear and stone-silent audiences aren’t right for us either. And we can’t really do background music at receptions or a 20-minute set of carols at a company’s Christmas party. To me, it’s the repertoire that makes Amasong special. I’ll admit to being a bit of a snob: I’ve been studying music since I was five years old, and barbershop harmonies and choral arrangements of Broadway show tunes and pop music don’t engage my brain or inspire my interest. But a piece that’s written not in typical western notation but as a mandala, or a round based on Greek myth, or a song that combines Chinese revolutionary texts with a chant to the Bodhisattva of compassion and breaks into 11-note chords? Yes please.

Given all that complexity and our particular yet encompassing purpose, you might wonder where on earth, let alone where in a town in the middle of the midwestern US, Amasong is going to find an audience. It’s a truly amazing list. We have been welcomed at several area churches and even an interfaith event that involved musicians and artists from mainline Protestant churches, the town’s mosque, a synagogue, and the Greek Orthodox church, all hosted at an African-American congregation. As you can guess, as a stated pro-gay rights organization, we’re not welcome by all religious centers in town, but more have invited us to participate in their services in than I would have guessed when I first joined the group in 2003.

We’ve sung at the hospice center for those nearing death and at memorial services for those who have passed away, commemorating and easing this emotional and often unsettling transition. We’ve provided entertainment and, I think, food for thought at conferences for scholars. We’ve welcomed refugees and immigrants to our town, offering the sound of home when they’re far away. We sing at the public libraries, sometime with special songs just for little ones, hoping that clapping and dancing along with us will help form a life-long love of music. And sometimes we do actually get political. In October we joined the march in the state capital to raise our voice to the state legislature in support of marriage equality for same-sex couples– and the legislation passed just a few weeks ago.

In the last few years, GLBTQ pride events have been popping up more and more regularly in our part of the United States. Our city’s first Pride Fest in 2010 was celebratory, informal, community-minded and family-friendly, and Amasong was there. As much as we were thrilled that such an event could exist in our backyards, and that we were viewed as so integral to the GLBTQ community that we were invited to perform, Pride Fest hasn’t been the easiest place to sing. The event is held in the large, open hallways of a 1960s shopping mall, which is a great space for setting up tables and activity areas for guests to wander through but terrible for containing and focusing sound. Think of being in a school hallway when classes let out. Even people who gather in front of the stage to hear us have a hard time, since our sound, even helped by speakers, has to compete with talking and laughing crowds down the hall. In some years we’ve also had to deal with crowd expectations: we love being introduced by a flamboyant drag queen but it’s hard to live up to that level of diva attitude and pop culture resonance. A few years ago we sang at the Pride event in another city 90 miles away, and they actually put us on right after the drag show. Talk about a bait and switch.

Discouraged by difficult acoustics and tricky scheduling – and, to be honest, feeling a little out of place fun-levels-wise – we didn’t perform at Pride in 2012. Instead we staffed a table, distributing information about our rehearsals and concerts and generally adding a social, artistic face to the local GLBTQ community. 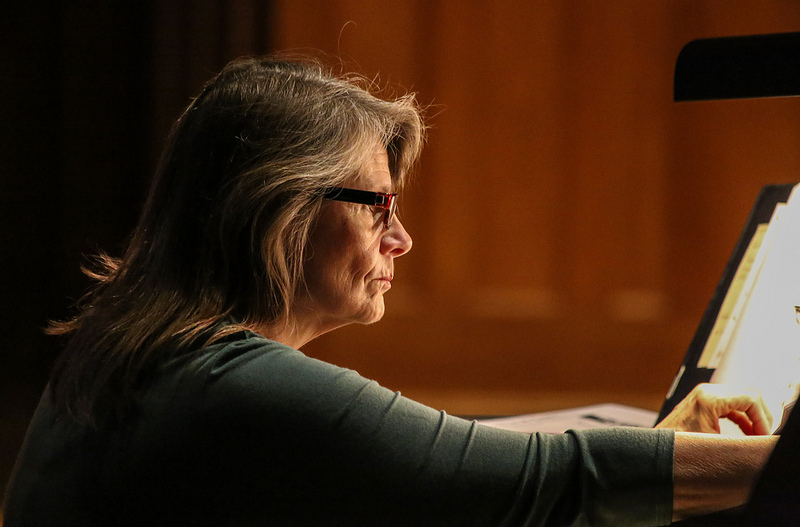 But it didn’t feel right to be at Pride without also offering the community our greatest possible gift of music. So in 2013 we tried again. Our new director, Jill Crandall, had asked us all for music suggestions, looking for pieces that were uptempo and…well, loud. Subtle doesn’t take you very far when you’re singing in a distracting setting full of talkative people. We chose music that was simple but had some showiness to it: clapping, rounds, weird sounds, big chords. We also wanted to perform our contribution to the It Gets Better Project, a Yoruba song from West Africa whose lyrics translate to “What the spirits have made can never be destroyed.” And our finale was a special arrangement of the folk song “Sail Away Ladies” with words changed to demand marriage rights for same-sex couples: “Folks in France and Uruguay can get married. Why can’t I? Marry me, lady, marry me….”

All that good planning couldn’t allay all our worries, though. Those of us who had sung at Pride before couldn’t help but wonder if anyone in the audience would be able to hear us well enough to appreciate the harmonies and lyrics. There is so much about performing in that setting that we cannot control or influence. But as the anxiety of performing grew, I realized there is more to being part of Pride – of being part of our community, however each of us might define it – than singing our typical repertoire. We’re also there to be a voice in solidarity with people who might not always feel theirs is welcome. Each of our members is another smiling face whose mere presence shows that people you know – your neighbors, your colleagues, your acquaintances from parenting groups and church – want to identify as GLBTQ and allies. Music is the unique gift Amasong offers, but proudly standing up and grabbing attention is an utterly non-unique one that is even more important.

To our surprise, we were invited to be the first musical act of the event, taking the stage right after the event was formally opened.  It wasn’t perfect. The stage was barely big enough to hold us; I speak from experience when I say that it’s hard to concentrate fully on the director when you’re wondering where the floor is. Even squished together, we could hardly hear each other over the din of hundreds of people in the mall and with no acoustic backdrop behind us (think of the shell-shaped walls that are often behind orchestras). The start time kept getting delayed, leaving us to sway carefully to the sound system that was blaring Cab Calloway’s “Minnie the Moocher” with its very sing-along-able refrain of  “hi-de hi-de hi-de ho.” Partway through our set, we entered an informal sing-off with a local children’s theater troupe that decided to preview songs from their production of Annie while we were still performing. If that little girl thought she could compete with 25 adults who grew up belting out “Tooooomorrow! Tomorrow! I love ya tomorrow!” at the top of their lungs, she was sorely mistaken.

Once again, Pride Fest wasn’t the perfect setting for a choir, especially one that takes musical quality seriously. I wish we had feedback from the audience about whether they actually liked the music…or could hear enough of it to form an opinion. I wish we had feedback from event organizers about whether they thought we were a good fit for the overall vibe of the event – are we too uptight, fussing over a stage and placement of microphones, or too hippy-dippy multi-culti with far too little pop? I’ve never heard answers to these questions, but even after another objectively less than ideal performance this year, I know what I think: we’re proud of who we are and grateful to get to do what we do, so we belong at Pride.

‪Beth Watkins has been blogging about Hindi cinema since 2005 at Beth Loves Bollywood, which has been featured in numerous publications like The Times of India, The Indian Express, Business Standard, and The Globe and Mail (Canada). Her writing on Indian films has appeared in The Hindustan Times Brunch, Tehelka, and Firstpost, and she has contributed to projects in international media such as BBC radio and CBC television. In 2011-12, she authored the weekly “Bollywood Journal” column in The Wall Street Journal’s India Real Time blog. During business hours, she works in ‪publications‪, exhibit development, and education at the Spurlock Museum of World Cultures at the University of Illinois.