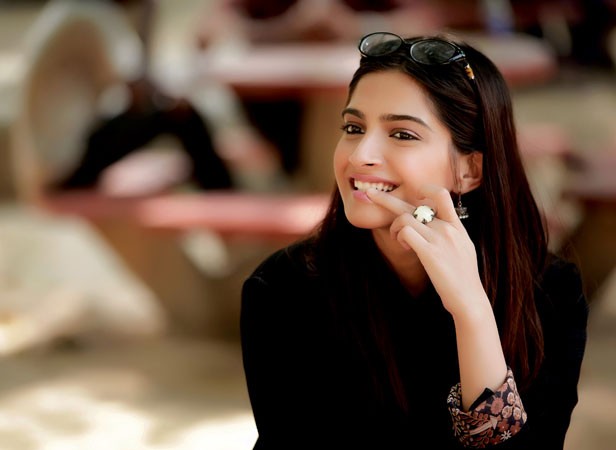 So, obviously I didn’t watch Raanjhanaa for a steely realist depiction of JNU. And I don’t think the film even tried. JNU for them must have been shorthand for a 3000% cut in the wardrobe budget.

However, I didn’t expect faux-JNU to become my new favourite non-place. There are ACs in every building, solid-looking chairs, some exceedingly perky posterage, microwaves in the hostel rooms and some very non-repressed people. This JNU campus is basically Amity University.

My falling-over-in-delight moment unfolds thusly: Sonam Kapoor is striding past hunky student politician Abhay Deol and stops for some good ol’ who-knows-more-about-inequality verbal foreplay. How does the film communicate to us that love has struck hard? When Sonam practically screams to Abhay “I seriously think you are overomanticising a situation which needs a much more logical approach.” a.k.a meet me at Parthasarthy Rocks so we can explore our new “serious” approach. Yipeeeee.

I mean why wouldn’t she want him? He plays with stray dogs and speaks at seminars titled Rural Development all while smiling as much as an evil-doll in a slasher film. And then of course, Chucky goes on to win the student elections.

How does Sonam skip the initial 5 years of being a lowly party-hand? She sleeps with power. And I can tell you from my personal lack of success, it’s not a maneuver for the weak-hearted. So hurrah.

I was kind of impressed by how much people touch each other in faux-JNU. Since they attach about as much meaning to politics as the film does to making sense, it was bound to be a rollicking free-for-all. As my new political hero – a joyously insincere female character – intones: “Yeah dude, it’s a completely ruthless and politically aggressive system”.

I was totally jealous of the classrooms in faux-JNU. They are out of an Airtel ad! I’m thinking of all those times my Ancient Society class has overflowed outside the hall. Every thing else about this campus is un-ancient. Also, faux-JNU is populated with some really spiffy lampposts. And the canteen, instead of slightly exceeding the sum of a few plastic chairs, evokes Channel [V]’s Humse Hai Life.

Also, I can’t believe I’m saying this, but I think the film overvalues the importance of Che Guevara in JNU life. It not being the 70s and all. He is everywhere — over the microwave, over the waterpipe — always ready to conjure leftist atmosphere.

Rather fittingly, Sonam wears black for her feminist monologue, an event the film erroneously refers to as a “street play in Daryaganj”. I’m not sure all the black clothes have the exact effect the costume designers were going for. There is black and there is black.

To quote Adrian Mole about his girlfriend, “Pandora only wears black clothes as she is in mourning for the world”. The black clothes of Raanjhanaa are, in contrast, tragically life-affirming. They are perfectly tailored, not-faded and judiciously matched with colour scarfs. Sadly, all the fuck-you-ness of JNU couture is lost.

Someone in JNU should write a letter of thanks to the film. Faux-JNU student politics has the reach to pull down state governments. Raanjhanaa happily decides that JNU is in fact (not just in the minds of JNU students) the centre of the universe.

From Delhi to Kannur, Hundreds of Students Protested Against Sexual Harassment This Week, and the Response Has Been Dismal

Sri Sri Ravi Shankar Was Asked Some Awkward Questions about Homosexuality and Nationalism at JNU Yesterday. Here’s What He Had to Say